The 'Charmed' alum appears to further poke fun at the celebrities' solidarity efforts by retweeting a comment that alluded to the cringeworthy viral 'Imagine' video in the early pandemic.

AceShowbiz - Rose McGowan has yet to bury the hatchet with Alyssa Milano. Having been feuding for years with her former "Charmed" co-star, Rose once again took aim at her and other celebrities for speaking out against the Texas abortion law.

On Thursday, September 2, Rose took to Twitter to share a screenshot of Alyssa's Instagram post of a Deadline article. It's titled "Reese Witherspoon, Kerry Washington & Alyssa Milano Among More Than 100 Stars Expressing Outrage Over Texas Abortion Law". Rose penned alongside the snap, "This is really going to help for sure absolutely moron achievement unlocked."

The "Grindhouse" actress appeared to further poke fun at the solidarity efforts by retweeting a comment that alluded to the cringeworthy viral "Imagine" video in early pandemic. "F**k, I'm feeling another song coming our way," so read the tweet along with a picture of Gal Gadot, Sarah Silverman and Will Ferrell. 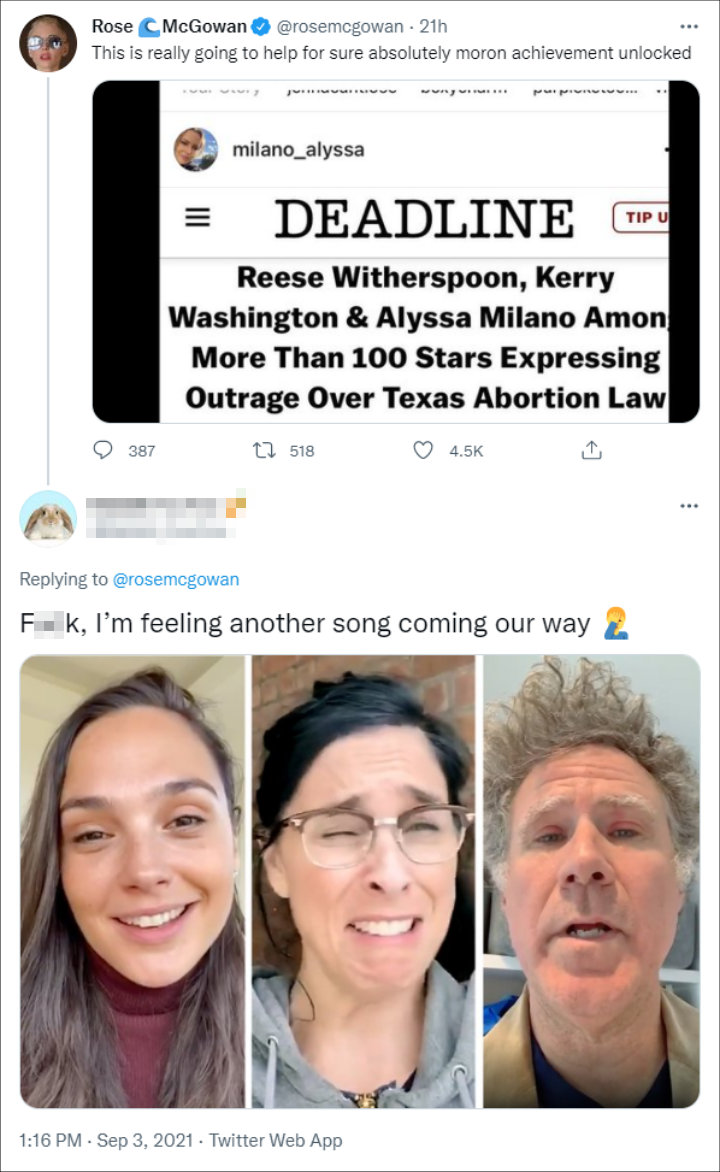 Rose and Alyssa's fallout began in 2017 after the former tweeted that Alyssa made her want to "vomit." She made the tweet after Alyssa continued to support Harvey Weinstein's ex-wife Georgina Chapman amid the #MeToo movement. Rose herself was one of many actresses who accused the disgraced producer of rape.

Beef aside, Alyssa joined the likes of Cher and Rosie O'Donnell in condemning the Texas new law that bans abortion after about six weeks of pregnancy. When voicing their critiques, the pop icon and the comedienne likened the "fetal heartbeat" bill to "The Handmaid's Tale".

"IF Texas IS Going 2 Take Women's Rights Away THEY SHOULD AT LEAST FURNISH STATE AUTHORIZED UNIFORMS," Cher wrote in a since-deleted tweet that included pictures of a burqa and of a character from the dystopian TV series who had her lips pierced shut. "WONT [be] LONG,TILL Texas OFFERS 'HANDMAID'S TALE' JEWELRY ON LINE. [Be] 1st.ON UR BLOCK 2 GET NEW' SHUT MY MOUTH' LIP RINGS."

"Texas, what the f**k," Rosie fumed in a video. "Before this country turns into a real version of 'The Handmaid's Tale', let's all get together and stop what's going on in Texas. Keep abortions safe and legal."