Weighing in on the multiple sexual abuse allegations against the Atlanta rapper, the 'Black Madonna' raptress brings up her previous claims that he threatened 'to cut my throat and push me down a flight of stairs.'

AceShowbiz - Azealia Banks has added to multiple sexual abuse allegations against T.I. The "212" hitmaker brought up her own previous claims of receiving violent threats from the Atlanta rapper after a lawyer seeks a criminal investigation on him and his wife Tiny Harris a.k.a. Tameka Cottle over multiple women's allegations against the couple.

"Y'all still never checked TI for saying he was gonna slit my throat and toss me down the stairs," Azealia posted on her Instagram Story on Monday, March 1. "All over questioning a white woman for calling herself a runaway slave master." She was referring to Iggy Azalea's controversial lyrics in her single "D.R.U.G.S.". 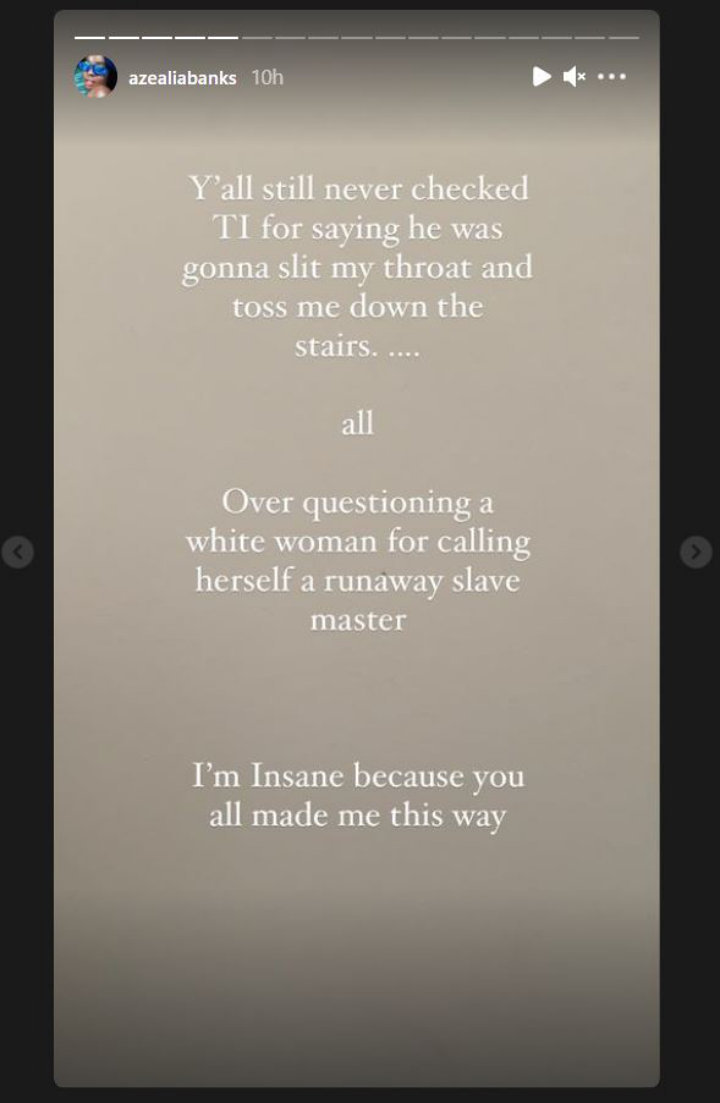 Azealia Banks accused T.I. of making violent threats against her in the past.

Believing that the public is responsible for her mental health issue, the New York City native wrote, "I'm insane because you all made me this way." She then added in another post, "Sad thing is T.I. and Tiny probably had igloo drugged up and forcing her into threesomes too!" 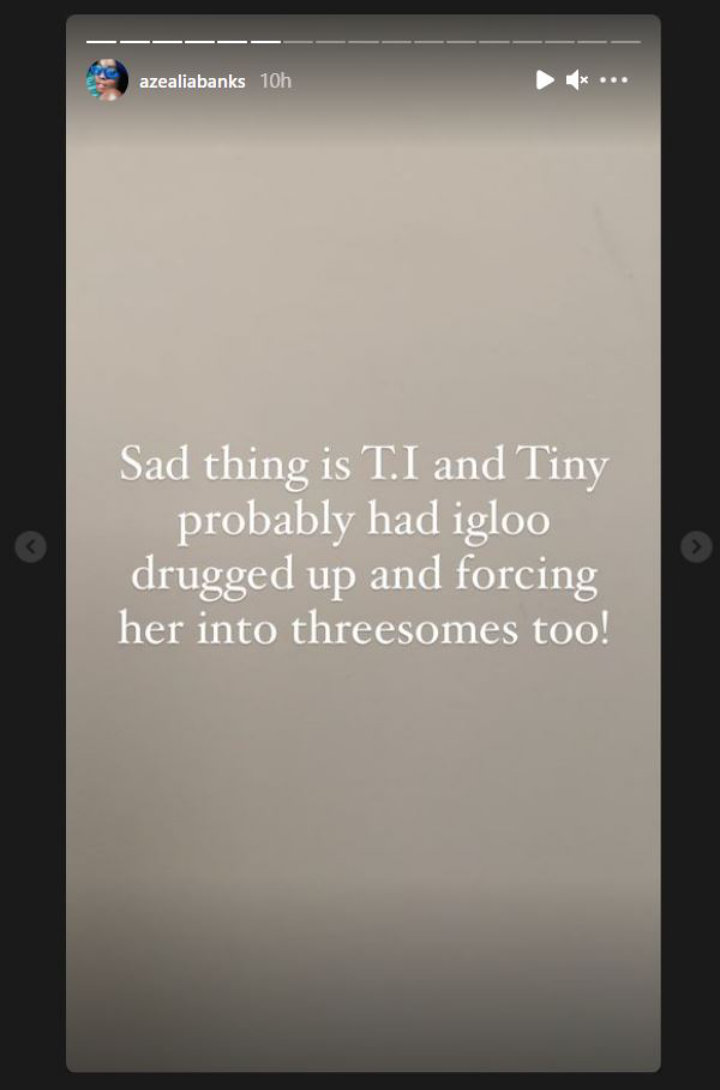 The raptress weighed in on sexual abuse allegations against T.I. and Tiny.

Azealia first made the shocking allegations against T.I. in 2020, after they're feuding over his Iggy-assisted track "No Mediocre". "T.I. is still sitting up there trying to convince himself and the public that he didn't also threaten to cut my throat and push me down a flight of stairs. Yet wants to sit up there and act like the f**king black savior. Lmao yall rap [N-words] are actual GARBAGE," she said at the time.

Azealia isn't the only celebrity speaking out against T.I. In an Instagram post, Wack 100 called out the rapper/actor as he believes the community needs to be aware of these claims. "I don't give a f**k maybe I'm the last one left friend family homeboy it don't matter when foul s**t going on the community needs to know so they can PROTECT the community," the music executive wrote along with a screenshot of an article about the allegations against T.I. and Tiny.

He added, "I didn't commit the acts or write up the article but the STREETS , the INDUSTRY the WORLD needs to f**k know. N***a drug my daughter he got led poisoning coming believe that." He additionally described T.I. as "Bill Cosby & R. Kelly All In One" as suggested by one of the hashtags.

Azealia and Wack called out T.I. after attorney Tyrone A. Blackburn, who represents 11 people claiming to be victimized by the hip-hop couple, seeks criminal inquiries on behalf of his clients, who accuse the couple of sexual abuse and assault. He sent letters to state and federal prosecutors Georgia and California on February 19. The attorneys general in those two states also received similar letters.

At a virtual press conference on Monday, March 1, Blackburn detailed the allegations brought by six anonymous women claiming that T.I. and Tiny had abused them, with some describing instances of drugging, kidnapping and rape. He added that he's withholding the names of the women because of concerns about potential intimidation.

Through their lawyer Steve Sadow, the couple has denied the allegations. "Clifford (T.I.) and Tameka [Tiny] Harris deny in the strongest possible terms these unsubstantiated and baseless allegations," he said in a statement. "We are confident that if these claims are thoroughly and fairly investigated, no charges will be forthcoming."

The lawyer insisted, "These allegations are nothing more than the continuation of a sordid shakedown campaign that began on social media. The Harrises implore everyone not to be taken in by these obvious attempts to manipulate the press and misuse the justice system."

The sexual abuse allegations against T.I. and Tiny first surfaced in January after Sabrina Peterson, a former friend of the Xscape singer, claimed that the rapper once put a gun on her head in front of her children. She later spoke with other women who claimed to have experienced sexual abuse at the hands of the hip-hop couple.

Now, Blackburn is also filing a defamation lawsuit against the couple on behalf of Sabrina, after they denied her claims. The attorney denied that the women ever asked for money, claiming, "They're seeking justice. ... I didn't ask him for a dollar and from what I got from the conversations we had from the emails, they were very, very interested in killing this story and these claims."

Steve responded with another statement which read, "That is patently false. I reached out to see if he would share any information since his name was posted on Instagram as the attorney for Sabrina Peterson. Blackburn repeatedly refused to provide the names of his accuser-clients or any corroborating or supporting evidence of his groundless claims. The Harrises repeat that they are confident if a thorough and fair investigation is conducted, no charges will be brought."