The 'Set Fire to the Rain' singer allegedly comments with Jamaican slang term during the two RnB stars' showdown on Instagram Live amid cultural appropriation accusations against her.

AceShowbiz - Adele has once again set the Internet abuzz with her reference to black culture. The British singer has sparked debate on Twitter after it's reported that she used Jamaican dialect on Brandy and Monica's recent Instagram Live showdown.

Following the two R&B stars' "Verzuz" battle hosted by Timbaland and Swizz Beatz on Monday night, August 31, a screenshot circulated online showing the "Someone Like You" songstress allegedly commenting, "Wah Gwaan! Yow gyal, yuh look good enuh." Her words are Jamaican Patois which are translated into "What's up? You look good girl." 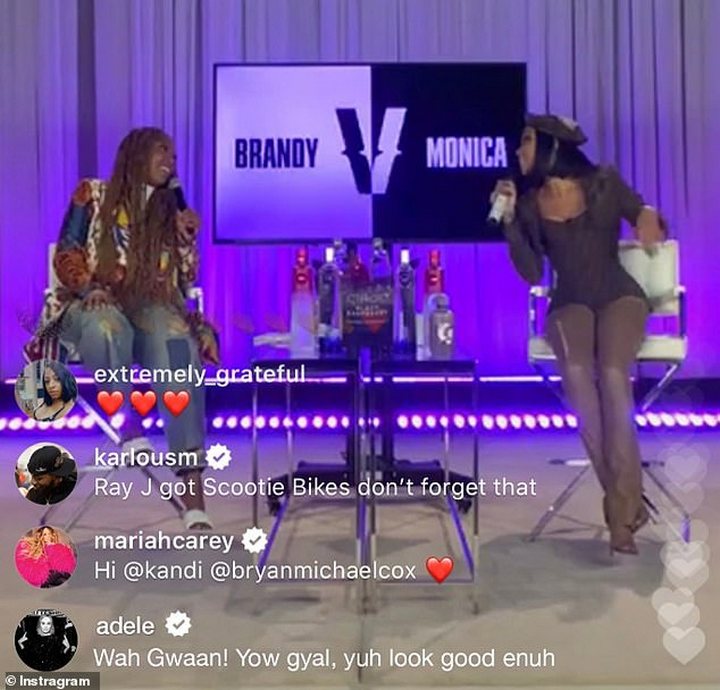 A screenshot of Adele's alleged comment in Jamaican Patois during 'Verzuz' circulated online.

Fans who spotted the screengrab later reposted it and praised Adele for seemingly poking fun at the cultural appropriation claims leveled at her. "Adele's energy is everything! Just saw her comment in the Brandy/Monica Versuz...," one person commented. Another proud fan joked, "Adele was trying to trigger them again this morning."

Some others, however, questioned the authenticity of the screengrab and wondered if it was photoshopped. "nah bc i thought that comment by adele on the brandy & monica verzuz was real... Not Adele in the Brandy and Monica Verzuz live... Whoever photoshopped this is crazy as hell... ," a doubtful user tweeted.

Another echoed the sentiment, "The amount of people who think this is real Loudly crying face (I was one of them but saw the light)... not people asking if this is real lmfao... Photoshop man..." Someone else similarly added, "'Wait this isn't real is it?!!!... Badly... Lmfaooooo this photoshop has me screaming."

One day before Adele's alleged use of Jamaican Patois, the Grammy Award-winning artist came under fire after posting a photo of her rocking a bikini top emblazoned with the Jamaican flag and Bantu knots to celebrate what would have been Notting Hill Carnival in London. "Happy what would be Notting Hill Carnival my beloved London," she wrote in the caption of the Instagram snap.

The 32-year-old was soon accused of cultural appropriation, with one slamming her, "With all this racial injustice going on @Adel (sic) thought this was ok?? #Adele #culturalappropriation." A disappointed fan commented, "Adele I love you and you're my favorite artist but this is culture appropriation please take down this photo."

Another similarly responded to Adele's photo, "Adele, I love you and so do many people, but the hair is not it. it's not right at all. This is cultural appropriation and sets a bad example for what white women should be doing on their heads. You're taking the light away from black women! pls learn from your mistake and do better!"

Adele Gets Mistaken for Katy Perry in New Photo