The 'Friday' singer admits she is 'deeply ashamed' after an old video resurfaced in which she participated in 'an offensive bit' with the embattled YouTube star.

AceShowbiz - Rebecca Black owns up to her past mistake after she's dragged in Shane Dawson's scandal. Over the weekend, an old video resurfaced in which the singer, who is best known for her viral hit "Friday", and the YouTube star laughed over Holocaust joke.

The clip in question features Shane holding up a piece of paper with "The Holocaust" written on it. He told Rebecca to act it out so that he can guess what's on the paper. The then-16-year-old singer attempted to act out a representation, but Shane failed to guess it. "Big vagina. Khloe Kardashian's vagina," he shouted.

When Shane asked Rebecca if it was her song "Friday", she replied, "I mean, I'm sure it happened on Fridays but...." Shane took a look at the paper before he started singing Rebecca's song with adjusted lyrics. "It's Friday, Friday, girl, somebody save me," he sang.

After the video garnered backlash, Rebecca took to Twitter on Monday to apologize for partaking in the offensive bit. "I am deeply ashamed to have taken part in such an offensive bit. Yes I was 16, uncomfortable, and didn't know this was coming," the singer admitted.

"Shane, I know that deep down you are trying to learn and grow," she continued, with a message to the embattled YouTube star. "But we must do better & take complete responsibility for how harmful this is."

She added in a follow-up tweet, "I am so sorry to those I have hurt. I wish what I would have done was shut such an offensive joke down, rather than uncomfortably play into something I deep down knew was wrong." 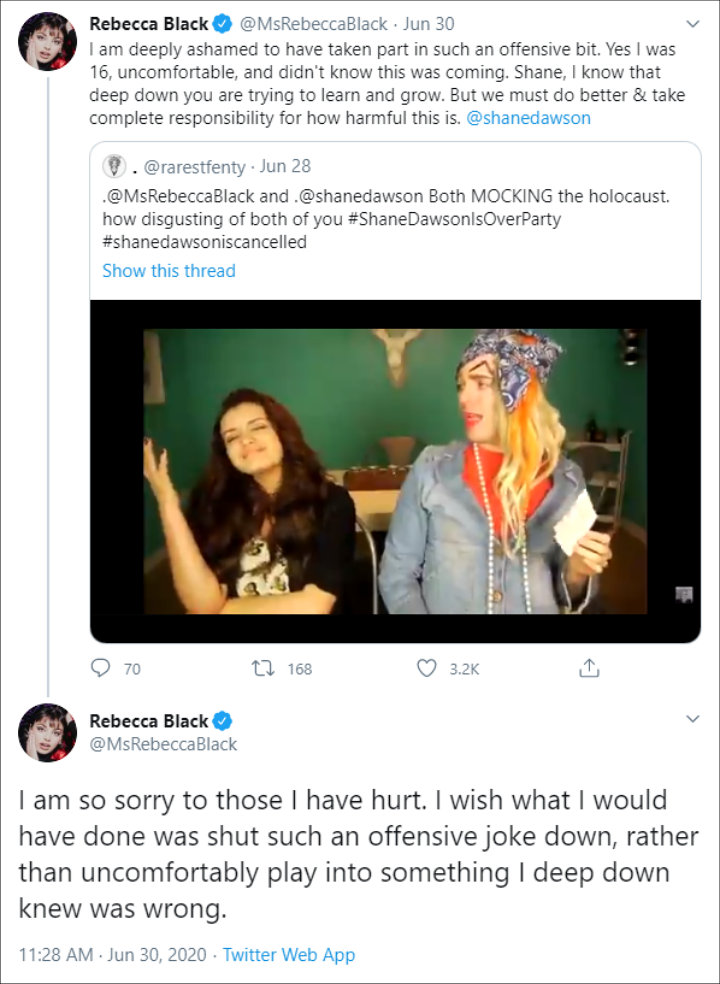 In the wake of the controversy, YouTube confirmed on Tuesday, June 30 that it stopped allowing Shane to make money from ads on his three channels. Target also announced that it would no longer sell books written by the controversial star.

Heather Dubrow Applauds Daughter Max for Coming Out as Bisexual