AceShowbiz - A host of celebrities have joined Twitter users in taking a swipe at Donald Trump. On the day the 45th president turned 74, the likes of Viola Davis, Ken Jeong, Christina Perri and many others turned to social media to pay tribute to former president Barack Obama, making merry the trending hashtags of "Obama Appreciation Day" and "Obama Day June 14th."

On Sunday, June 14, Davis tweeted a photo of the former POTUS which carries a message that read, "Change will not come if we wait for some other person or some other time. We are the ones we've been waiting for." Along with the picture, she wrote, "Happy Obama Day!," adding the "#ObamaAppreciationDay" hashtag at the end. 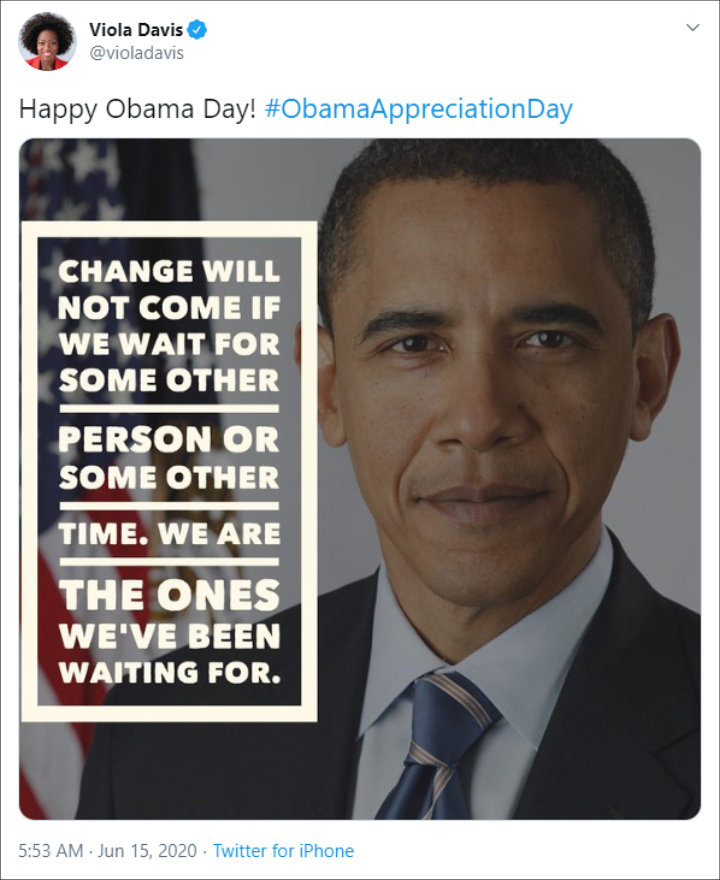 Jeong, in the meantime, posted a photo of him sharing a good laugh with Obama, adding in his caption, "Happy #ObamaDayJune14th." Perri similarly shared a memory of her meeting with the husband of Michelle Obama, along with a note that read, "happy #obamaappreciationday !!! what a guy!!!"️ 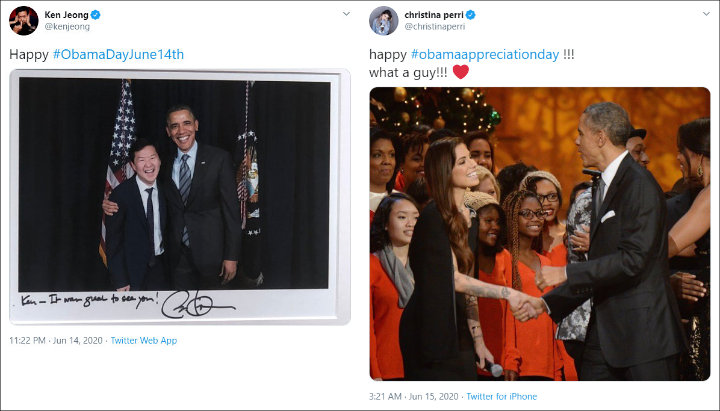 Also honoring Obama on June 14 were Mariah Carey and Ciara. The "Heartbreaker" hitmaker let out a photo of herself posing with the former president and the ex-First Lady. In the caption of the snap, she simply wrote, "Happy #ObamaAppreciationDay!!" The "Love Sex Magic" singer, meanwhile, shared a photo of her shaking hands with him while her husband Russell Wilson looked on. 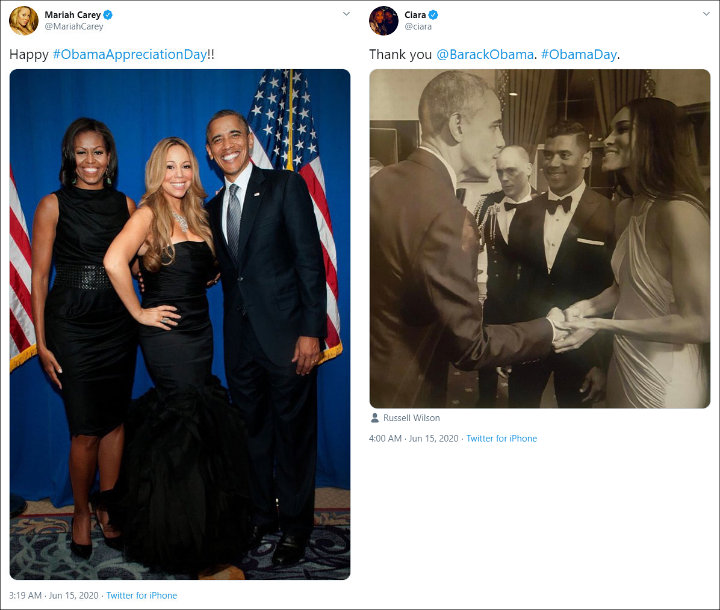 "Selma" director Ava DuVernay, on the other hand, made indirect comparison between Obama and Trump when sharing footage from the White House screening of her movie. "Joining #ObamaAppreciationDay. I won't say which SELMA cast member took this totally contraband footage," she tweeted. "But now seems like a good day to share for the first time as we salute the civility and intelligence that once was a mainstay in the White House." 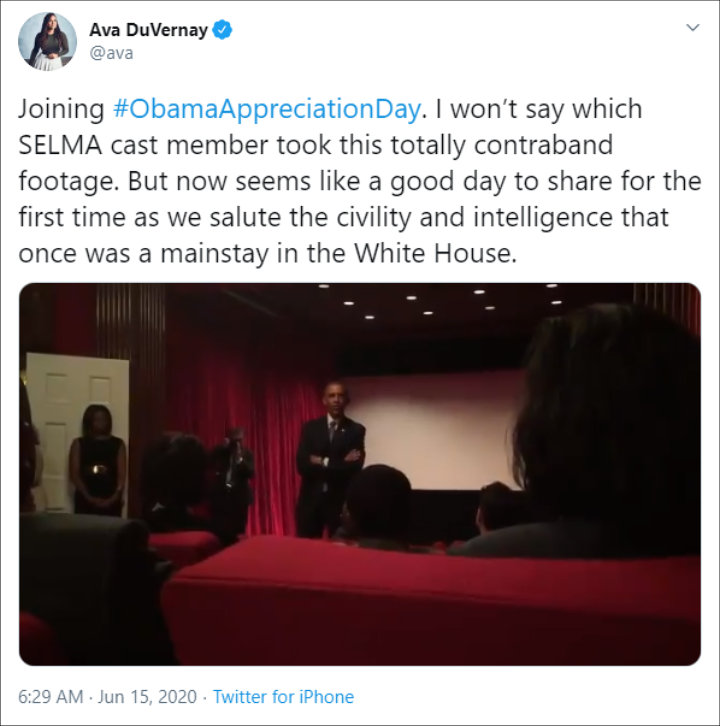 Before joining the celebration of Obama, "Star Trek" actor George Takei first shaded Trump by tweeting, "I'd say happy birthday to Donald on his special day, but after all, #AllBirthdaysMatter." The hashtag was a reference to the controversial "All Lives Matter" slogan made in retaliation of the Black Lives Matter movement. He followed up the tweet with a tribute to Obama, "Oh, how you are missed, Mr. President. What do you miss most about @BarackObama, friends? #ObamaDayJune14th." 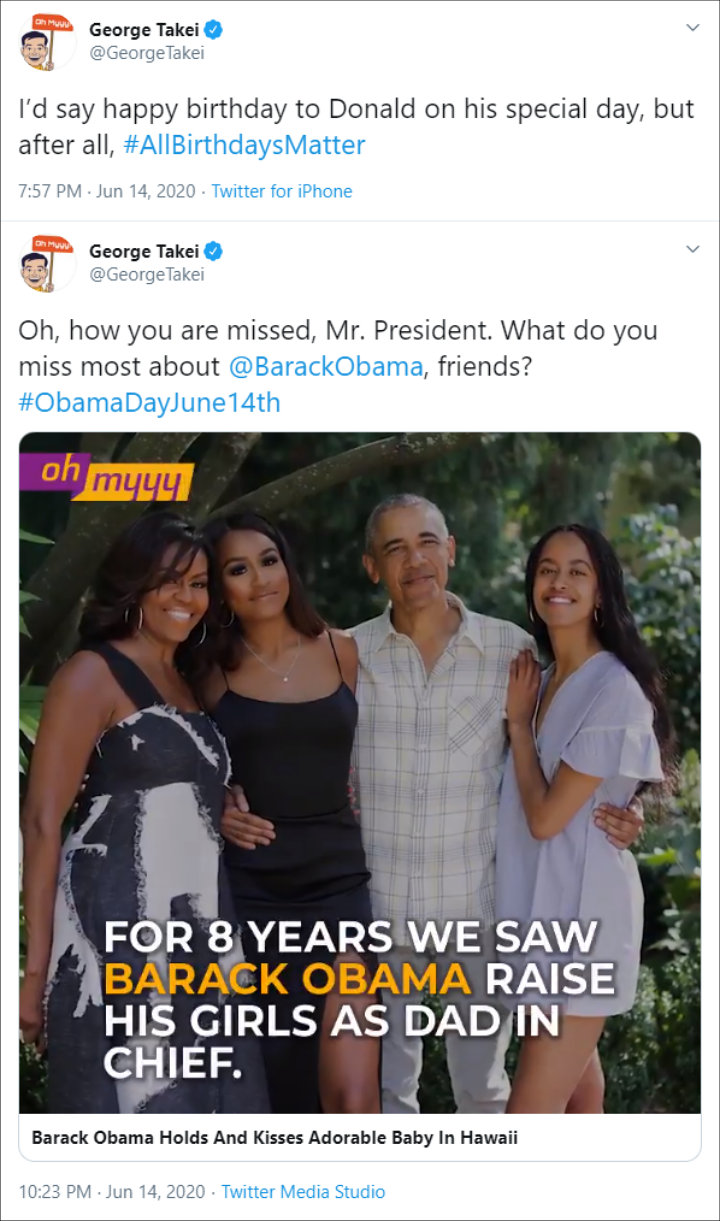