In a black-and-white video the ex-wife of Josh Duhamel shares on social media, 6-year-old Axl is seen holding onto a sign that read, 'I love black people,' as he marches with a group of other children.

AceShowbiz - Fergie knows the importance of early education in the fight against racial injustice. On Sunday, June 14, the ex-wife of actor Josh Duhamel brought along her six-year-old son as she and a group of others supported the Black Lives Matter demonstration in Los Angeles, and shared footage of their peaceful protest on social media.

Uploaded on Instagram, the black-and-white video captured the singer, whose real name is Stacy Ferguson, carrying a sign that read, "Racism must stop." Her son, Axl, in the meantime held up another sign that read, "I love black people." The clip followed them as they marched with a group of other children carrying signs supporting the movement.

Both Fergie and her son donned face masks, required for protection against the novel coronavirus, during the demonstration. In the caption of the video, the former member of Black Eyed Peas wrote, "It starts at home #BLM." He ex-husband was not seen attending the protest with the two of them.

Fergie's video post garnered many positive response from her followers. One stated, "Awesome @fergie [100 emoji] agree! It starts at home;)!!" Another one pointed out, "you're such a great mom, angel!! stay golden!!" A third simply commented, "well done. so proud of you." Most notable, however, a response from her former bandmate apl.de.ap, which read, "Dopeness." 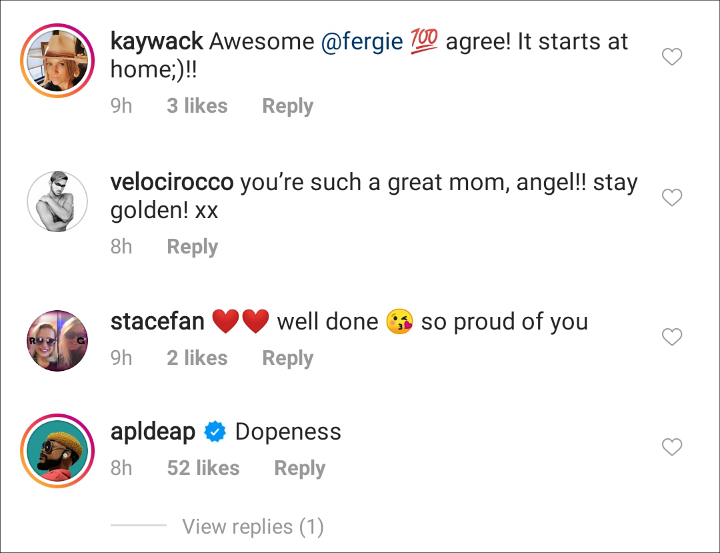 Fergie praised by many for bringing her son to BLM protest.

The Sunday protest itself was initially organized to be part of Pride event, but turned out to be a Black Lives Matter solidarity march. The day prior to the protest, activists painted the streets along the Hollywood Boulevard near the famous TCL Chinese Theatre with the colorful words of "All Black Lives Matter".

Fergie has been vocal in her support to the movement against police brutality and racial injustice. Back on June 5, she wrote in an Instagram post, "Thank you to all of the protestors who have stepped outside their homes during a global pandemic, come together with their communities, and stood up for change as the frontline against racial injustice."

"My unconditional allegiance is with all of you and with the entire #BlackLivesMatter movement," the 45-year-old declared, before encouraging others to continue on with the rally. "Let's continue pushing forward so that the children of this nation don't have to live in fear. It's a new time. It's a new season. Let's keep moving ahead for policy change!!!"