Hours after issuing an apology for his past offensive tweets, the pop rock band's guitarist expresses his heartbreak over a Twitter accusation that he inappropriately touched underage girl.

AceShowbiz - Michael Clifford was left heartbroken by a sexual assault allegation made against him. Just hours after issuing an apology for resurfaced offensive tweets, the 5 Seconds of Summer guitarist made a return to social media to share his thoughts on the claim made on Twitter that he inappropriately touched underage girl in 2014.

On Sunday, June 14, the 24-year-old musician first tweeted, "holy s**t. i am heartbroken to read these things that are being said - they are just BEYOND untrue." He continued in the same post, "i was never allowed in the crowd i only ever watched at front of house - and i would've never EVER done that. i wouldf NEVER do anything like that. i'm so f**king upset."

When a fan asked him to explain more, Clifford admitted he was at lost for words. "i really just dont know what i can even say," he said in a following tweet. "people are asking me to explain but how can i explain something that i was never involved with in the first place? i truly want to give you what you're asking from me but what more can i say?" 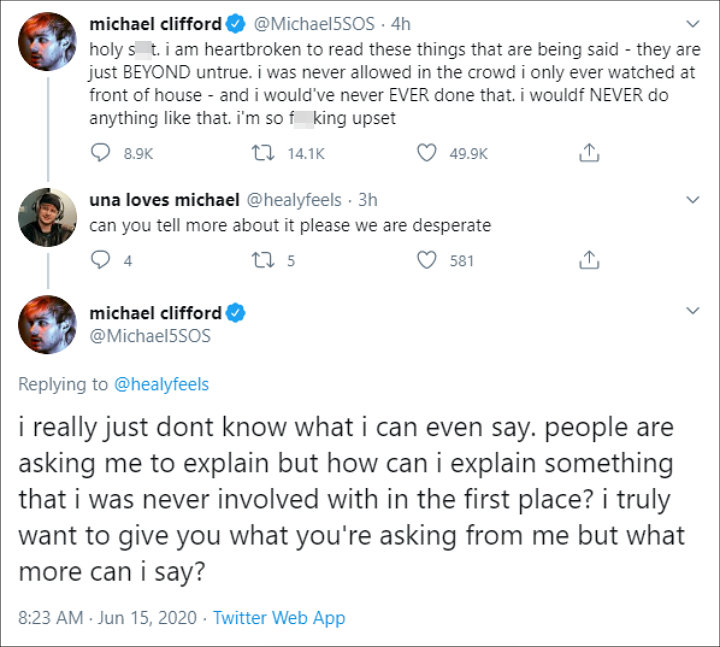 In a separate tweet, Clifford put out a 2013 YouTube video capturing his band being swarmed by fans. Along with it, he noted, "this is what life was like in 2013 - please understand it wouldve been logistically impossible for me to get through a crowd at a show i just played at! im not trying to be defensive i promise this is just so completely false." 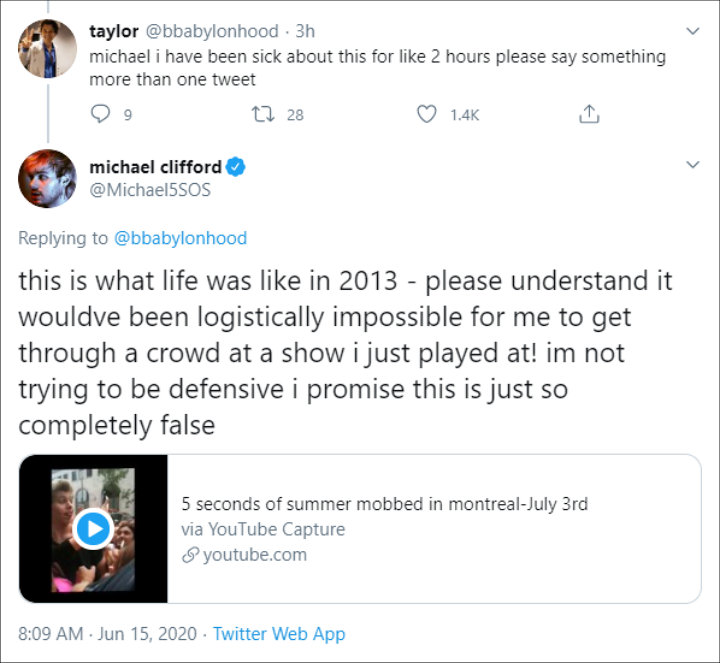 Michael Clifford tried to explain how it was back in 2013 for his band.

Earlier the same day, multiple Twitter users spread second-hand accounts of @sophiecth5's claim that Clifford inappropriately touched her in his hotel room when she was only 14 years old and his band was opening for One Direction on the "Take Me Home Tour". One of the resharers, whose tweets were later removed, noted that the incident took place while bassist Calum Hood was around. @sophiecth5 has since deleted her account.

These sexual assault allegations came shortly after Clifford tweeted his remorse over his resurfacing 2012 tweets in which he was said to be making sexist and anti-gay remarks. On Saturday night, June 13, he tweeted, "hi. I am so f**king sorry for all the dumb s**t I did when I was younger. I am a different person now with a much better understanding of the world. Some people have access to a digital megaphone a bit earlier than they should, unfortunately, I was one of them." 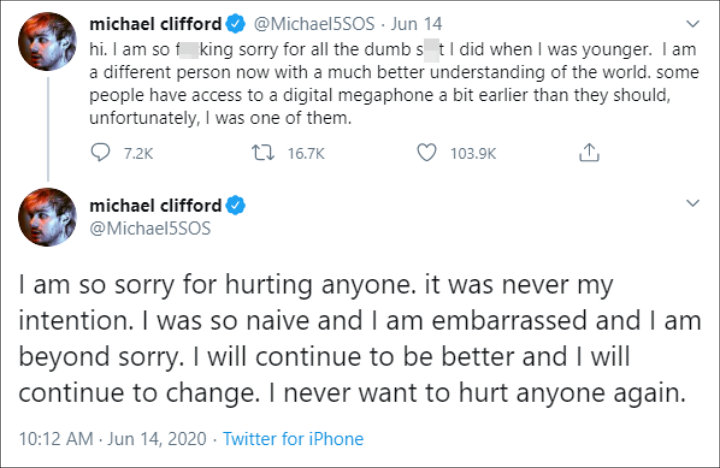 Michael Clifford apologized for using sexist and anti-gay language in past tweets.

In a second tweet that followed, Clifford once again apologized and promised to do better. "I am so sorry for hurting anyone. It was never my intention. I was so naive and I am embarrassed and beyond sorry. I will continue to be better and I will continue to change," he stated. "I never want to hurt anyone again."