The actress playing Toni Topaz on The CW's teen drama series has previously voiced her frustration over the portrayal of black people as sidekick to white leads in the media.

AceShowbiz - Vanessa Morgan's campaign about the lack of diversity in the media has been heard. Days after she voiced her frustration over how "black people are portrayed in media," the actress known for her portrayal of Toni Topaz on The CW's "Riverdale" received a public apology and a promise to do better from the show's creator Roberto Aguirre-Sacasa.

On Thursday, June 4, Aguirre-Sacasa made use of Instagram to declare, "We hear Vanessa. We love Vanessa. She's right. We're sorry and we make the same promise to you that we did to her." In the statement, he continued, "We will do better to honor her and the character she plays. As well as all of our actors and characters of color."

The showrunner went on to note, "CHANGE is happening and will continue to happen. Riverdale will get bigger, not smaller. Riverdale will be part of the movement, not outside it." He added, "All of the Riverdale writers made a donation to @BLMLA, but we know where the work must happen for us. In the writers' room."

Morgan made a public complaint about the unfair treatment of black people in support of the Black Lives Matter movement. On Sunday, May 31, she tweeted, "Tired of how black people are portrayed in Media, tired of us being portrayed as thugs, dangerous or angry scary people."

The "Geek Charming" actress continued expressing her anger in the same post, "Tired of us also being used as side kick non dimensional characters to our white leads. Or only used in the ads for diversity but not actually in the show. It starts with the media. I'm not being [quiet] anymore."

On Wednesday, June 3, the 28-year-old actress explained why she got vocal about the unfair treatment. "To my black fans, I have now made it my purpose to fight for us. To the six year old me who had no role model that looked like me on TV. This is for you," she tweeted. "We aren't your token black non dimensional characters. This is being black in Hollywood. I will fight for YOU." 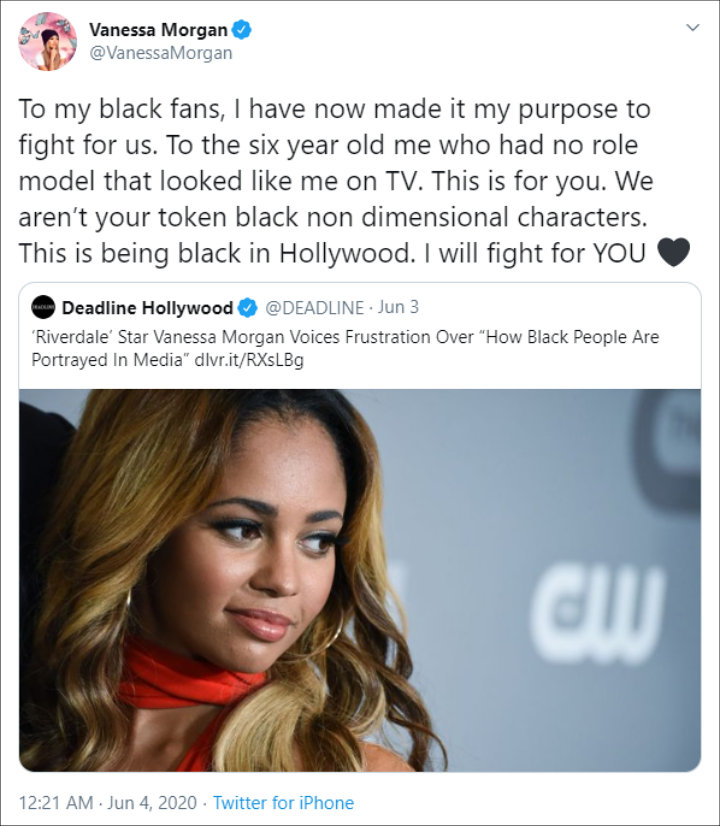 Vanessa Morgan explained reasons behind her fight for change in the media.

While she criticized the portrayal of black people in the media, Morgan stressed it has nothing to do with her "Riverdale" co-stars, which include Lili Reinhart, Camila Mendes, Cole Sprouse, KJ Apa, Madelaine Petsch and Charles Melton. "They don't write the show," she pointed out. "So no need to attack them, they don't call the shots & I know they have my back."