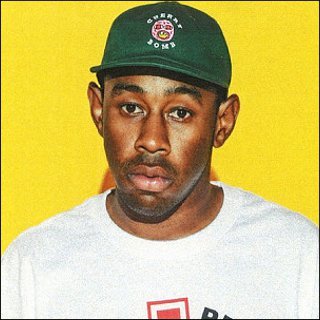 %cTyler, the Creator% was born Tyler Okonma on March 6, 1991. His love of music began at the tender age of 7 when he created imaginary albums complete with the track list. He formed and fronted a rap group called %cOdd Future Wolf Gang Kill Them All%. The group released their first album in 2008, but Tyler was head on to craft his own album.

In late 2009, he released his debut album titled "Bastard". Led by the title track and "French", the effort landed at No. 32 on Pitchfork Media's list of the Top Albums of 2010. Meanwhile, the second single was ranked 61st on Pitchfork Media's list of the Top 100 Tracks of 2010. As his solo career seemed to be on the track, Tyler put up with his group, going on tours and promoting their second album.

Tyler said he was under a one-album deal with XL Recording and therefore "Goblin" was released on May 10, 2011. It was a concept album, continuing Tyler's dialogues with his fictional therapist Dr. TC, who was first heard on "Bastard". The album, which was led by "Sandwitches", bowed at No. 5 on Billboard 200 and No. 1 on Billboard R&B chart.

During this period, not only his music received criticism, but also his homophobic slurs on "Goblin" sparked backlash. In his defense, he said, "I'm not homophobic. I just say 'faggot' and use 'gay' as an adjective to describe stupid s**t."

Tyler was not taking a break, announcing that he was due to release his third album titled "Wolf" in 2012. He said it would contain instrumentals that he had made since he was 15. However, it wasn't until the following year that the studio effort arrived. Making its way out via Odd Future Records and RED Distribution, "Wolf" was released on April 2, 2013 and featured %cFrank Ocean%, %cPharrell Williams% and %cErykah Badu% among others. It received critical acclaim and debuted at No. 3 on Billboard 200 after selling 90,000 copies in its first week.

Tyler spent 2014 mostly on the road as he performed on a series of shows across North America. On March 15, he was arrested for inciting a riot after asking fans to push their way past security guards at a concert on the South by Southwest music festival.

Tyler's fourth album "Cherry Bomb" was released digitally on April 13, 2015, while the physical copies arrived on April 28 with five different album covers. The set boasted collaborations with massive hip-hop stars, including %cKanye West%, %cLil Wayne% and %cScHoolBoy Q%. To support the album, Tyler was criss-crossing the globe for a world tour, visiting some countries in America, Europe and Asia.

However, Tyler was forced to cancel a string of tour dates after revealing that he had been banned from visiting the U.K. for "3-5 years." U.K.'s Home Secretary Theresa May insisted that the reason for the ban was because of Tyler's controversial lyrics on "Bastard". Tyler later claimed that he felt like he had been treated "like a terrorist" and implied that the ban was racially motivated. He said that "they did not like the fact that their children were idolizing a black man."

His career aside, Tyler was romantically linked to %cKendall Jenner% in 2016 after they were spotted cozying up to each other while heading to a restaurant in West Hollywood. The two later shut down the dating rumors with witty remarks on Twitter.

Almost two years since the release of "Cherry Bomb", Tyler released a song titled "Who Dat Boy" featuring %cA$AP Rocky% in June 2017 to precede his new album. Following many promotional countdown posts on social media, he announced that the fourth studio album was titled "Scum Fuck Flower Boy" and would be released on July 21.

Ahead of the release, some tracks off the album were leaked online. Three songs titled "Foreword", "Garden Shed" and "I Ain't Got Time!" sparked speculations that Tyler would be coming out of the closet as a gay on the new effort. Many people thought it would be very odd for Tyler to come out as he was notoriously known for his homophobic remarks on his music, while some others weren't surprised by the potential revelation.

"Flower Boy" was released on July 21 as scheduled, receiving widespread critical acclaim by music critics and arriving at No. 2 on Billboard 200 with 106,000 equivalent album units. Furthermore, the self-produced album was named one of the best albums of the year by several music sites, including Billboard, Complex and Exclaim!. It was also nominated for Best Rap Album at the 60th Annual Grammy Awards, but was beat out by %cKendrick Lamar%'s "Damn."

In the following year, Tyler released a couple of standalone singles that were titled "Okra" and "435". The former song became his second solo single that charted on Billboard's Hot 100, debuting and peaking at No. 89. Additionally, it peaked at No. 48 and No. 49 on Digital Songs and Hot R&B/Hip Hop Songs charts respectively. Tyler announced a collaboration project with %cA$AP Rocky% called WANG$AP after that, releasing a music video for a remix of %cMonica%'s "Knock Knock". The title of the remix was "Potato Salad".

His personal life was put in the spotlight later in November, when close pal %cJaden Smith% declared during his set at the Camp Flog Naw Festival in California that Tyler was his boyfriend. Jaden doubled down his remark on Twitter, which Tyler denied by replying back on the micro-blogging site, "Hahaha you a crazy n***a man."

The rumors slowly died down, and Tyler was back focusing on his music again. He first teased an upcoming music release in May 2019 by unveiling two short video clips that showed him dancing erratically while wearing a long blonde wig, a multicolored suit, black sunglasses and a grill, before announcing his fifth studio album "IGOR". Hitting the stores on May 17, the album debuted at No. 1 on Billboard 200 with 165,000 units. It marked his first chart-topping album on the chart.