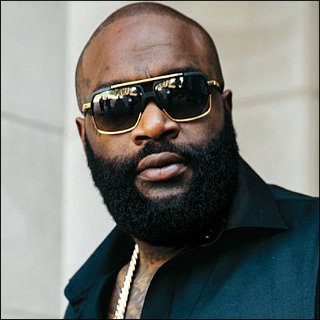 Once only an artist frequently featured in songs, Rick Ross stepped up into the spotlight as the lead man. The Haitian rapper was born William Roberts on January 28, 1977 and raised in the impoverished area of Carol City, Florida. He grew up in thick influence of rap culture where artists like Notorious B.I.G. and Tupac Shakur swept the nation with their hits. During the '90s, Roberts formed a rapping group called Carol City Cartel that later on led him to being signed to a small label Suave House Records that was also the home of 8Ball & MJG.

It was, however, beyond his expectation that Slip-n-Slide Records also took notice of his talent and signed him immediately. With the new recording house, Roberts who was by then known as Rick Ross, became acquainted to Hip-Hop heavyweights like Trick Daddy and Trina. He was frequently made a featured guest either in an artist's album or mixtapes. Ross also received a promotion when he was frequently brought along in Trick Daddy's concerts.

It was not until 2006 that he became a solo artist, penning the song "Hustlin'" that amazingly created a biding war between record executives. Starting from P. Diddy's Bad Boy Records to Irv Gotti's The Inc., they all wanted the right to the talented rapper. However, it was Jay-Z who eventually nabbed the deal with him, taking Slip-n-Slide under a contract with his Def Jam label. When it was released in March 2006, "Hustlin'" became an instant hit, peaking at #11 on U.S. Hot R'n'B/Hip-Hop Songs chart. The single eventually was certified Gold by RIAA in May 2006 and Ross has sold millions of its ringtones.

With such strong single, Ross released his debut album "Port of Miami" in August that year. Surprisingly, despite only spawning one single, the album managed to open at #1 on Billboard Hot 200 chart, selling well over 187,000 copies in the first week. While touring to promote the album, Ross prepared a second album that he named "Trilla" after his idol, Michael Jackson's all-time classic album "Thriller". The album was intended for the end of 2007 but aiming for perfection, Ross pushed it to March 11, 2008 with two singles in advance, "Speedin'" and "The Boss".

"It was one of the first vinyl albums I bought, along with Run DMC's 'Walk This Way'," he said of the album. "I just played it over and over for a year long. I just wanted to make my sophomore album that intense, just wanted to electrify everyone." Self-proclaimed to be a "classic" like Jackson's, Ross made the album to have star-studded appearances by Jay-Z, R. Kelly, T-Pain, Lil Wayne, Mannie Fresh, Akon, Young Jeezy, Flo Rida, Trick Daddy, Floetry's Marsha Ambrosius, Nelly and more, with production from, Cool & Dre, The Runners, DJ Toomp, J-Rock, J.U.S.T.I.C.E League, Drumma Boy and J.R. Rotem, among others.

Ross' career was defined by one album after another since. In his 2009 album, "Deeper Than Rap", he revealed his experience as a correctional officer in a prison, particularly in the track "Valley of Death". The third studio album managed to open at number one on the U.S. Billboard 200 chart, selling 158,000 copies in its first week. Earlier that year, Ross was involved in an altercation with 50 Cent that launched into a full-blown diss war. "In Cold Blood", a track in "Deeper Than Rap", made reference to 50 and an ended career. 50 began releasing songs in retaliation including "Warning Shot".

Ross was quick to release another album. "Teflon Don" came in July 2010 with Ne-Yo -featuring song "Super High" as the lead. The album debuted at number 2 on the Billboard 200 selling 176,000 copies in its first week. At the same time, P. Diddy announced that he was working with Ross on a collaborative album together. They released a single called "Another One". Ross was nominated for Best Male Hip Hop Artist at the 2011 BET Awards.

Ross immediately began the work on his fifth studio album, finishing for a late 2011 release but pushed it back to summer 2012. "You The Boss" and "I Love My Bitches" led the album, titled "God Forgives, I Don't", which was released through Def Jam Recordings and his own label Maybach Music Group on July 31, 2012. The album sold 218,000 copies in the first week, landing at No. 1 on the Billboard 200 chart.

Ross' "God Forgives, I Don't" was so well-received by the public that it was certified gold in less than two months after its release. Celebrating the achievement, the rapper released a mixtape titled "The Black Bar Mitzvah" in October. Despite the success of his fifth album, Ross didn't show any sign of slowing down because in the following year, he began working on his sixth effort "Mastermind".

Its lead single, "No Games", was premiered on September 5, 2013, while the album hit the stores on March 3, 2014. It received generally positive reviews from music critics and debuted at No. 1 on Billboard 200. Furthermore, "Mastermind" was nominated for Album of the Year at the 2014 BET Hip-Hop Awards. Later in November, Ross released another album titled "Hood Billionaire". Unlike his two previous efforts, "Hood Billionaire" received mixed reviews and failed to debut atop Billboard 200.

In 2015, Ross got himself in trouble with the law as he and his bodyguard were arrested in Georgia on kidnapping and assault charges. Even though the case made him serve time in house arrest in his home in the city, that didn't stop him from making music. He released mixtapes "Black Dollar" and "Renzel Remixes", as well as his eighth studio album "Black Market". The project, which marked his last release with Def Jam Records, debuted at No. 6 on Billboard 200. It also stirred up controversy as he was heard rapping, "Assassinate [Donald Trump] like I'm Zimmerman" on track "Free Enterprise".

Following the release of the album, Ross signed a solo deal with Epic Records. He unveiled many songs after the deal, including "Make It Work" and "Purple Lamborghini", the latter of which served as the soundtrack to "Suicide Squad".

Ross' ninth studio album, "Rather You Than Me", was released on March 17, 2017 to generally positive reviews. It debuted at No. 3 on Billboard 200. He immediately began working on his next album "Port of Miami 2", which was a sequel to his debut album, after that. However, in the middle of the production, Ross was rushed to hospital in March 2018 after he was found unresponsive in his Miami, Florida home from a possible heart attack. Fortunately, he was released from hospital just a few days later.

He continued working on the album, releasing singles such as "Big Tyme" and "Gold Roses" featuring Drake. "Port of Miami 2" finally hit the stores on August 2, 2019, arriving at No. 2 on Billboard 200.

Fetty Wap Struggling to Cope With His Brother's Death: 'I'm Not OK'