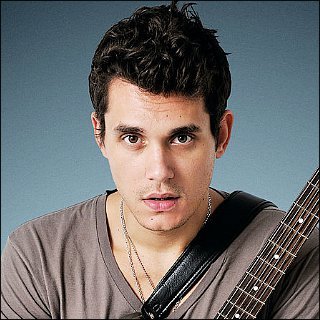 %cJohn Mayer% was born John Clayton Mayer on October 16, 1977 in Bridgeport, Connecticut to English teacher Margaret and high school principal Richard. The middle child grew up in Fairfield, Connecticut where he attended the local high school before enrolling at Center for Global Studies at Brien McMahon High School in Norwalk.

His love of music, especially blues, was stemming from %cMichael J. Fox%'s guitar performance in "Back to the Future". Teen Mayer started taking guitar lessons from a local guitar-shop owner and he got addicted instantly. So serious was he in playing the instrument that his parents took him to see psychiatrist. His parents also prevented him from skipping college in favor of music career.

Years of practice finally came to a defining moment where he was booked to play at local blues bars. Mayer had a band but he was also writing his own songs. In an interview he said his songwriter nature came after a hospitalization when he was 17. He penned his first lyrics after leaving the hospital but his mental health was spiraling down at the same time his creativity burst up. Living in fear, Mayer resorted to anti-anxiety drugs such as Xanax, but the episode soon passed.

After graduating from school, he gathered money from his payroll as gas station attendant. His desire of music led him to Berklee College of Music in Boston, Massachusetts but he did not finish the course after two semesters. Instead, he followed a friend, Clay Cook, to Atlanta to form a duo called LoFi masters. They performed in local clubs and coffee houses but soon their creative differences broke the group apart.

However, Cook continued to be involved in Mayer's solo career, co-writing most of the songs found in Mayer's first indie EP. With the help of producer Glenn Matullo, "Inside Wants Out" launched Mayer's career in the industry. As he performed in one city and another, Mayer began to build his reputation among music lovers. After his performance at South by Southwest, he was signed to Aware Records which later released his internet-only album, "Room for Squares".

In a deal with Columbia Records, Aware gave the re-release distribution rights of "Room for Squares", which in 2001 became a major release. Tracks from the album like "No Such Thing" and "Your Body Is Wonderland" propelled Mayer's popularity so fast that he received his first Grammy in 2003 for Best Male Pop Vocal Performance.

His schedule became even tighter with the concerts and the release of CD and DVD of his live performance in Birmingham, Alabama. They were followed by the release of his second album "Heavier Things" which received favorable reviews, thanks to single "Daughters". He embarked on a U.S. tour in 2004, and he was accepted into the Hip-Hop community as he worked with the likes of %cKanye West% and %cCommon% later that year. The collaborations led to him thinking of changing his sound.

In 2005, he began working on his third studio album, taking inspirations from lots of jazz artists such as %cHerbie Hancock% and %cB.B. King%. In the same year, he formed %cJohn Mayer Trio% with bassist %cPino Palladino% and drummer %cSteve Jordan%. They played a number of blues and rock music, going on club tour and releasing a live album called "Try!". The trio took a hiatus in 2006 as Mayer's third album needed his full attention.

"Continuum" combined his pop sound and the new blues sound he recently discovered. First single "Waiting on the World to Change" quickly became a major hit, debuting at number 25 on Billboard Hot 100 chart. The success of the album was backed up by "Gravity" and "Say". He was nominated for five Grammys in 2007, winning Best Pop Song with Vocal for "Waiting on the World to Change" and Best Pop Album for "Continuum".

Around the same time, Mayer's relationship with singer %cJessica Simpson% took the media spotlight. However, the couple only lasted less than a year and he moved on with %cMinka Kelly% and %cJennifer Aniston% within a year, building his reputation as womanizer.

"Continuum" was re-issued in November 2007 as it contained additional live recordings and a cover of %cRay Charles%' song "I Don't Need No Doctor". He hosted a three-day Caribbean cruise event in 2008 that included many other artists. A live concert film called "Where the Light Is" was released that year, directed by Danny Clinch. Mayer was also one of the artists paying tribute to %cMichael Jackson% on his memorial service on July 7, 2009, playing the guitar version of "Human Nature".

The fourth album, "Battle Studies", was released in November 2009 and quickly sat on top of Hot 200 chart. It contains hits like "Who Says" and "Heartbreak Warfare" as well as "Half of My Heart" which was later remixed with %cTaylor Swift%'s vocal added. Despite the album's commercial success, Mayer controversially said in an interview with Rolling Stone that "Battle Studies" was not his best album.

His work on the fifth album began right after but granulomas found in his throat delayed the recording process. After much rest, no talking and no spicy food, Mayer was able to complete "Born and Raised" in 2011. The first single "Shadow Days" was released in February 2012 but it sadly did not break the top 10 of Hot 100 chart. The album, though, became his third number one album on the Billboard Hot 200 in the United States, selling 219,000 units in the first week after the May 22, 2012 release.

Lack of promo was partly blamed for the album's lukewarm response as the surgery for his throat problem did not go as well as expected. The unforeseen circumstances forced Mayer to go under the knife for a second time and cancel the tour to support "Born and Raised" indefinitely. Almost at the same time, he was embroiled in a feud with his ex Swift. He was not impressed with "Dear John", a song she wrote based on their fling. He called her out, saying she had "cheap" songwriting skills.

Mayer started fresh in 2013 with new album "Paradise valley". He also moved on with new girl %cKaty Perry% who's also preparing a new album of her own. Their tight schedules between recording and performing seemed to take a toll on their relationship. They already broke up and made up several times within a few months. His newest album is due August 20, 2013, preceded with singles "Paper Doll" and "Wildfire". Featuring Perry and %cFrank Ocean% as guests, the album already gained positive reviews from music critics.