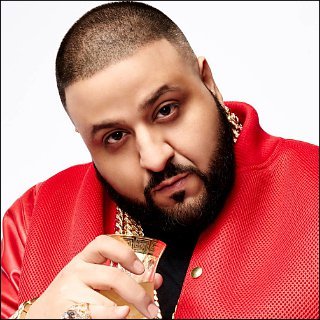 %cDJ Khaled% is multi-talented in the way he becomes not only an artist but also radio host and Def Jam South president. Born on November 26, 1975 in New Orleans, Louisiana, Khaled Bin Abdul Khaled inherited Palestinian blood. In his teens, Khaled had developed interest in music but he didn't want to be a rapper because he "didn't have that kind of ethic".

He loved making beats and experimenting with sounds, therefore he chose to be a music producer. "I fell in love with making sounds and beats and from then on I worked very hard to get somewhere with my music," Khaled said. One of his first takes in showbiz was as radio host and a sidekick to Miami rapper Luther Campbell in 1998. In the same year, hip-hop group %cTerror Squad% was established in Bronx, NYC and Khaled joined as a member.

In June 2006, his first solo album "Listennn...the Album" was released under Koch Records. "I went to Koch because I like dealing with the underdogs. The people at Koch are family to me, and they all work. It's not like when you're dealing with the big companies and you have to find out who's doing what," the DJ said about signing to the label. The decision was on-spot for his album debuted on Billboard Hot 200 at number 12.

Khaled followed it up with "We the Best" in 2007 with more artists such as T-Pain, Plies and Rick Ross in feature. One of the singles "We Takin' Over" was at number 28 on Hot 100 and later certified gold by RIAA. When not working on his next album, Khaled was keen on helping other artists in their projects.

His busy schedule prevented him from releasing an album in 2009. "Victory", his fourth studio album, was released in March 2010, featuring %cNas%, %cSnoop Dogg%, %cLil Wayne%, %cLudacris%, %cDrake% and many more. Unlike the previous ones, the album had low sales but still debuted at #12 on the Billboard 200.

Khaled's fifth album is titled "We the Best Forever" and would be released as part of his new deal with Cash Money Records and Universal Motown. Among the guests are fellow Terror Squad member %cFat Joe%, %cChris Brown%, %cKeyshia Cole%, %cCee-Lo%, %cKanye West% and %cNicki Minaj%. "Welcome to My Hood" was released as the first single and the album was dropped in stores on July 19, 2011.

Khaled returned with a new album called "Kiss the Ring" in 2012. He followed it up with "Suffering from Success" in 2013. The title was inspired by Khaled's visit to a doctor. At the time, he complained about a bald spot on his beard to the doctor, who then told him he was "suffering from success."

One of the standouts from the project was "I Wanna Be With You" featuring %cNicki Minaj%. Before releasing the song, Khaled publicly "proposed" to Minaj with a 10 karat diamond ring from Rafaello & Co., valued at about $500,000. "I ain't a young boy no more. I'm on my thinking the future. I just had to be honest. I always liked her. She's my friend, of course. And I like her. It's more than a crush," he said of his proposal in an interview before Minaj said that Khaled was just kidding.

"Khaled is my brother and Khaled was not serious with that damn proposal, ya'll. Please let it go. He was kidding," she said in an interview with Funkmaster Flex that later premiered Khaled's "I Wanna Be With You". This led some to believe that his proposal was a "publicity stunt" to promote his new single.

In May 2015, Khaled revealed that he'd parted ways with Cash Money Records. "I'm not signed to Cash Money at all. I've been off for a minute," Khaled said. "It's not that I'm here to promote that I've been off. That's family. But, nah, it's just We The Best. Nothing negative, everything's beautiful." His first project after leaving the label was "I Changed a Lot" that came out in October 2015.

In February 2016, Khaled signed a management-only deal with %cJay-Z%'s Roc Nation and announced his ninth studio album. Titled "Major Key", the LP was released in July 2016 and became his first album to reach No. 1 on Billboard 200.

Following the success of his ninth studio album, it didn't take too long for Khaled to work on his next album entitled "Grateful". He announced the album in February 2017 before releasing the first single off the effort, "Shining" featuring %cBeyonce Knowles% and %cJay-Z%. It peaked at No. 57 on Billboard's Hot 100 chart.

The second single of the album, "I'm the One" featuring %cChance the Rapper%, %cJustin Bieber% and %cQuavo%, was released on April 28. The song was greatly praised by many people, leading to it debuting atop Hot 100. It marked his first No. 1 single on the chart. Days before releasing his album, Khaled premiered its third single "Wild Thoughts" featuring %cRihanna% and %cBryson Tiller%. The song debuted at No. 4 on Hot 100.

"Grateful" finally made its way out to stores on June 23. It arrived at No. 1 on Billboard 200, marking his second No. 1 album on the chart. One month after the release of the set, it was certified gold by the RIAA after racking up more than 500,000 units.

Khaled took a little break from making music after that, making a cameo appearance in promotional material for "Spider-Man: Homecoming". He also appeared as himself in "Pitch Perfect 3". Besides working on movies, he served as a judge on singing competition show "The Four".

He came back to his music career when he was announced as the opening act for %cDemi Lovato%'s "Tell Me You Love Me" tour. In addition to accompanying the songstress for her tour, he collaborated with her on "I Believe", which served as the soundtrack to "A Wrinkle in Time". The song was released on March 7, 2018.

In the same month, Khaled announced his eleventh studio album "Father of Asahd" as well as released the first single off the set, "Top Off" featuring %cFuture%, Beyonce and Jay-Z. For the album's second single, he once again teamed up with Chance, Justin and Quavo. Titled "No Brainer", the song was released on July 27 and debuted at No. 4 on Hot 100 chart.