In a surprising humble response to the British singer's decision to leave the app, the Twitter owner is open for feedback from the Rocket Man regarding 'misinformation' that bothers him.

AceShowbiz - Elon Musk apparently still listens to customers' feedback despite the controversial decisions that he has made since taking over Twitter. The wealthiest person in the world has responded after Elton John bid farewell to the application due to its "recent change in policy."

The British musician announced his decision to quit the social media platform on Friday, December 9 in what now has become his last tweet. "All my life I've tried to use music to bring people together. Yet it saddens me to see how misinformation is now being used to divide our world," he decried Twitter's new policy.

The 75-year-old singer/pianist added, "I've decided to no longer use Twitter, given their recent change in policy which will allow misinformation to flourish unchecked."

Elton's complaint didn't go unnoticed by Elon, who has since tried to reach out to the star. In a surprising humble response, the Tesla CEO asked for feedback from the begrudging customer regarding the "misinformation" that bothered him.

"I love your music. Hope you come back," the tech magnate replied to Elton's tweet, before asking, "Is there any misinformation in particular that you're concerned about?" 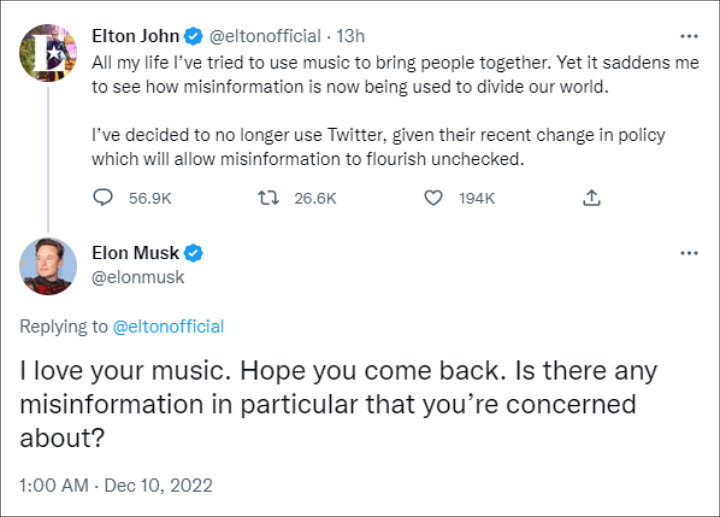 Elton has not responded to Elon's inquiry as the Rocket Man may have logged out from his account.

While Elton did not detail the reason why he left Twitter, his decision comes in light of Kanye West's anti-Semitic comments on the platform since his account was restored when Elon became the new owner. The rapper's account, however, has been suspended again due to "incitement to violence" after the Yeezy designer posted a logo that featured both Nazi's symbol and an anti-Semitism symbol.

Less than two weeks ago, Twitter also announced it will no longer enforce a policy to combat misinformation about the Covid pandemic. "Effective November 23, 2022, Twitter is no longer enforcing the COVID-19 misleading information policy," a note on Twitter's transparency pages read.