Prior to getting suspended on Twitter, the Yeezy designer broke the internet by claiming in one tweet that he once caught his reality TV star ex-wife with the Phoenix Suns player.

AceShowbiz - Kanye West is kicked out of Twitter once again. On Thursday, December 1, it was revealed that the rapper's account no longer exists as it's been suspended for violating the Twitter rules following several anti-Semitic posts.

Elon Musk, the new CEO of the blue bird platform, confirmed the suspension. "I tried my best. Despite that, he again violated our rule against incitement to violence. Account will be suspended," the Tesla founder explained in one tweet.

In another post, Elon clarified that the suspension had nothing to do with Ye posting a picture of topless Elon while on yacht. "Just clarifying that his account is being suspended for incitement to violence, not an unflattering pic of me being hosed by Ari," Elon tweeted. "Frankly, I found those pics to be helpful motivation to lose weight!" 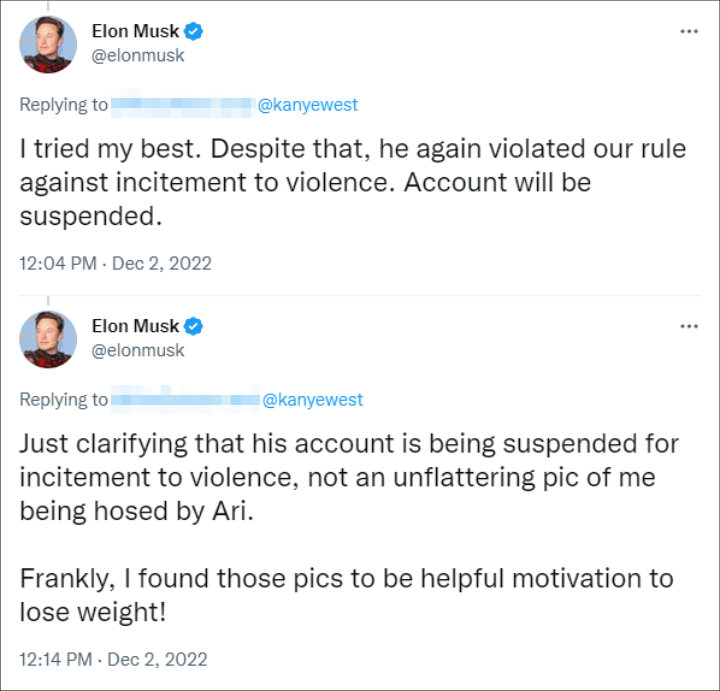 Prior to getting suspended on Twitter, Ye made use of his platform to make a series of eyebrow-rising tweets. In one of his tweets, Ye posted a logo that featured both Nazi's symbol and an anti-Semitism symbol. "YE24 LOVE EVERYONE #LOVESPEECH," so the Yeezy designer captioned the tweet.

The post apparently prompted Elon to personally reach out to the Yeezy designer. The hip-hop star shared a screenshot of Elon's text to him, telling him, "Sorry, but you have gone too far. This is not love." Elon doubled down his remarks as he replied to Ye's tweet, "This is not."

Ye additionally broke the internet by tweeting about his ex-wife Kim Kardashian and Chris Paul. "Let's break one last window before we get outa here I caught this guy with Kim good night," so he tweeted alongside a picture of the Phoenix Suns player.

Ye's latest Twitter tirade came after he sparked outrage for showing love for Adolf Hitler and Nazi on conspiracy theorist Alex Jones' "Infowars" podcast. "I see good things about Hitler... every human being has something of value that they brought to the table, especially Hitler," the 45-year-old rapper said. "I do love Hitler, I do love the Zionists - I love everyone."

After explaining that he loves everybody equally, the "Gold Digger" hitmaker stressed, "I like Hitler... they (the Nazis) did good things too, we've got to stop dissing the Nazis all the time... the Jewish media has made us feel like the Nazis and Hitler have never offered anything of value to the world."