The 'Walk on by' hitmaker cracks a joke as she responds to rumors that the 'Saturday Night Live' alum is romantically linked to Emily Ratajkowski after Kim Kardashian split.

AceShowbiz - Dionne Warwick quips she'll be Pete Davidson's next catch. Responding to rumours the "Bodies Bodies Bodies" star, 28, is now dating model Emily Ratajkowski, 31, the "Walk on by" hitmaker jokes that she'll be his next conquest after his raft of A-list girlfriends, including Kim Kardashian, Phoebe Dynevor, Kate Beckinsale, and Ariana Grande.

"I will be dating Pete Davidson next," the 81-year-old music legend jokingly tweeted. 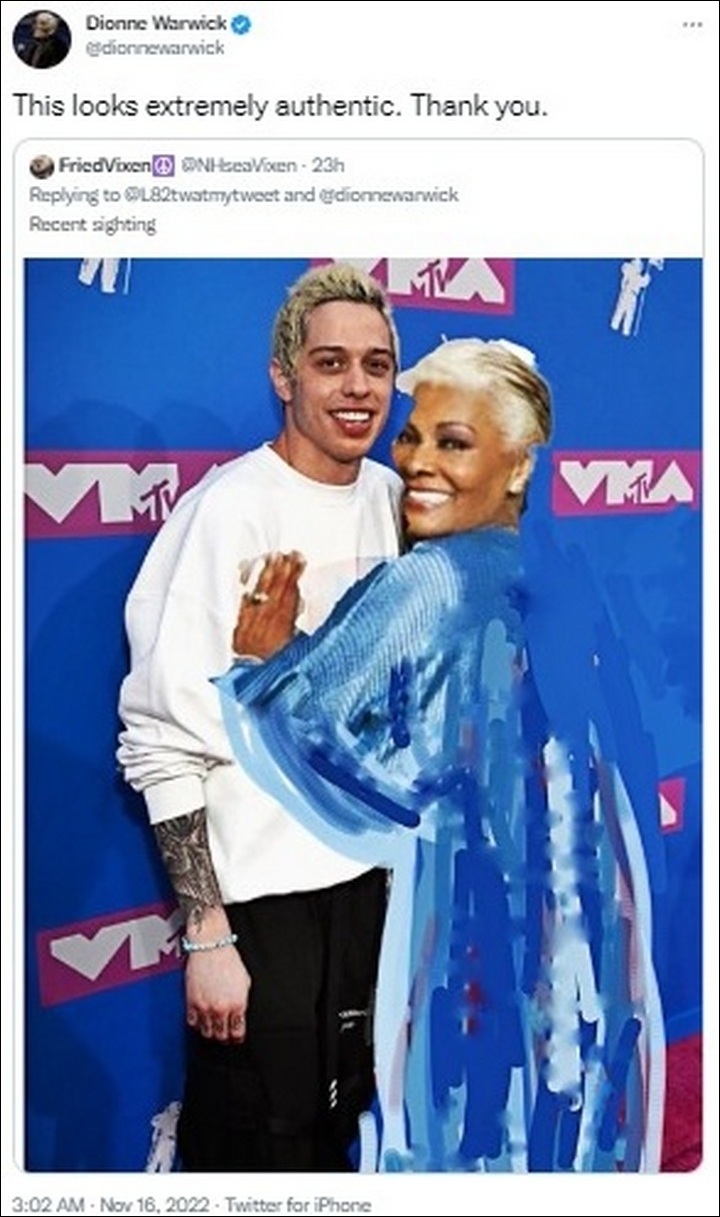 Dionne - who has become a popular Twitter personality - clapped back at the people who doubted she was the one sharing funny messages to her 620,000 followers with proof it's her running the account.

In a video - which the "Heartbreaker" hitmaker captioned, "If you're new here," she said, "Well, huh, so there's still some nonbelievers huh? Well I want you to believe this, I am Dionne Warwick and I tweet. Yes I do, and I want y'all to stop thinking I don't okay. Do yourselves a favor alright now, I want you to stop it. Bye (sic)!"

Recently, Dionne tweeted that Leonardo DiCaprio doesn't know what he is missing with his supposed "25-year dating rule." The diva insisted it's his loss he doesn't date women older than 25. She wrote in September, "I just heard about Leonardo DiCaprio's 25 year rule. His loss. You don't know what you're missing (sic)."

Dionne has remained on Twitter despite Elon Musk's recent $44 billion takeover of the micro-blogging site. The world's richest man had comedian Kathy Griffin's parody account suspended just recently after she "violated the rules" of the social media app by changing her screen name to that of the Tesla boss.