Shortly after the 'Blinding Lights' crooner was spotted leaving a restaurant together with the 'Wanted' actress, a photo capturing a pair who are believed to the Canadian star and the 'Say So' raptress on a dinner date surfaces.

AceShowbiz - Is there anything romantic going on between The Weeknd and Doja Cat? The two young stars are reported to be romantically linked to each other after they were allegedly caught on a dinner date.

According to an eyewitness, the pair were spotted together at Bondst restaurant in Soho. A photo shared by the tipster to deuxmoi captured a man and a woman sitting side by side on a table, with the man putting his head on his hand.

They didn't show any PDA, but the two were sitting close enough to hint that they're comfortable with the presence of each other. Their faces, however, were barely seen as the camera only captured their backs. 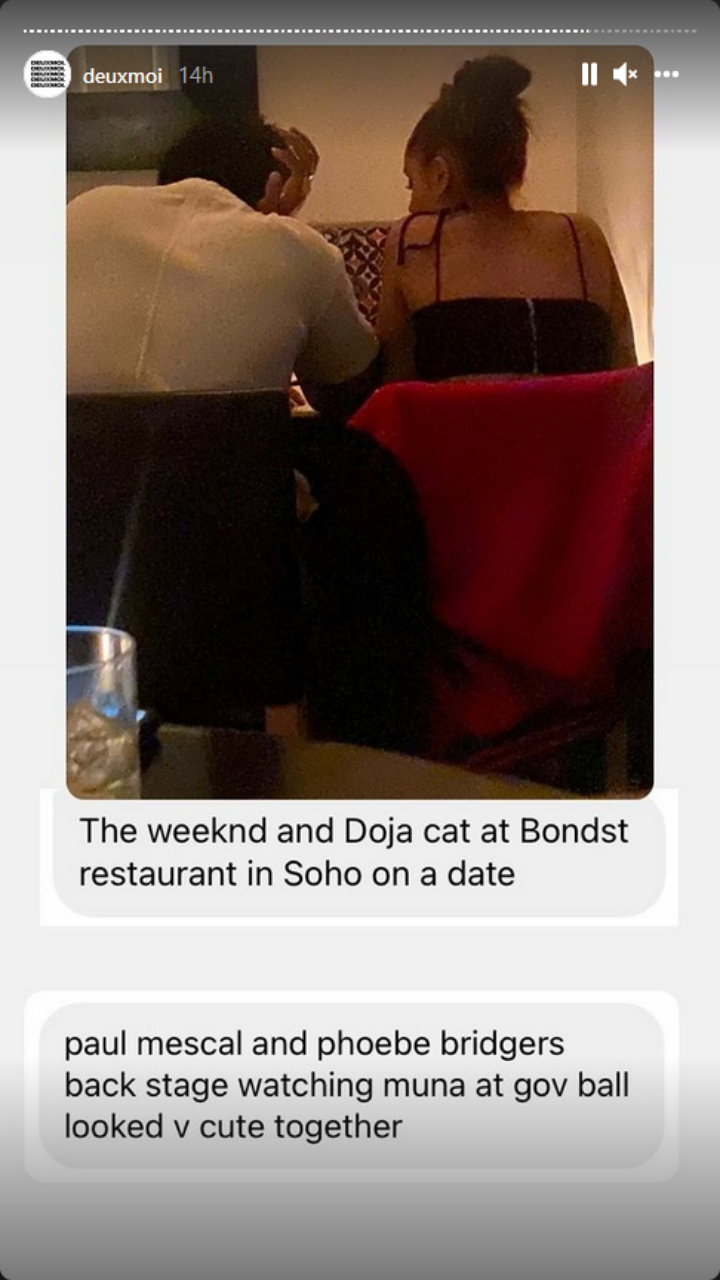 A pair who are believed to be The Weeknd and Doja Cat were spotted on a date.
See also...

It's unknown when the photo was taken, but this arrives shortly after The Weeknd was photographed hanging out with Angelina Jolie again. The Oscar-winning actress and the three-time Grammy Award-winning artist were spotted dining together at an Italian restaurant in Santa Monica on Saturday night, September 25, fueling their dating rumors.

The 46-year-old actress and the Canadian crooner reportedly spent two and a half hours inside a private section of the luxurious family-run Italian restaurant, Giorgio Baldi, according to Daily Mail. Though the two made sure to arrive separately, they were spotted exiting the eatery together. The rumored lovers were also seen hopping into the backseat of the Oscar-nominated songwriter's waiting black SUV. They then drove to his $70 million Bel-Air mansion.

The Weeknd and Angelina first sparked dating rumors after they were spotted leaving celebrity hot spot Giorgio Baldi in Santa Monica back in July. The Sun reported that the twosome spent hours at the high-end Italian restaurant before leaving separately.

A source close to the "Can't Feel My Face" hitmaker, however, suggested that there wasn't anything romantic going on between the two. "They're clearly not trying to hide [the dinner date]," the so-called insider told Page Six. "He's definitely focused on getting to the movie business. He has the new HBO series he's starring in."