Following the criticism she receives after coming out as an anti-COVID vaccine, the former Victoria's Secret Angel insists that she is in her 'unique power' and 'free.'

AceShowbiz - Doutzen Kroes seemingly keeps receiving backlash online after coming out as an anti-coronavirus vaccine. Following the criticism, the former Victoria's Secret Angel defended herself, noting that she stepped into "power of consciousness."

On Monday, September 27, the 36-year-old beauty turned to her Instagram Story to write a quote over an Instagram TV about freedom. "I'm in my unique power, I'm me and I'm free and so are you when you step into that power of consciousness," she stated. 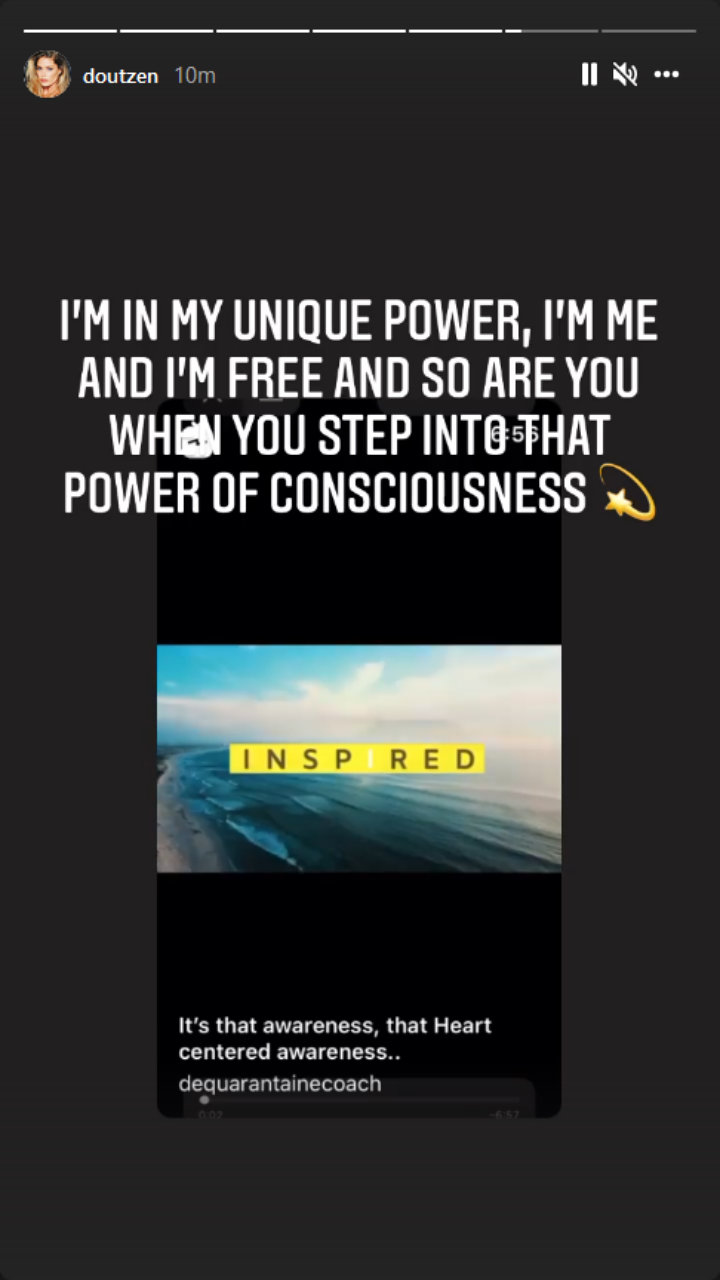 Doutzen Kroes defended herself after facing backlash over her anti-vaccine post.

A few hours earlier, Doutzen also shared a lengthy note, detailing why she went public with her decision of not getting vaccinated. "I have told you my point of view. It was scary because its not a popular opinion to have," she began. "It's even frowned upon and ridiculed. Some call it dangerous some call it brave."

"Whatever you call it it comes from a place of knowing that protecting my right to decide what I put into my body is sacred and needs to be protected," the "Zack Snyder's Justice League" actress added. "I shared my opinion because I hope to reach people to tell them they are not alone."

Doutzen went on noting that she believed going public with her decision was actually "so freaking hard." The "Wonder Woman" actress also said that it's hard to "hear one-sided information in the media and feel like you're doing the wrong thing while protecting yours and everyone's right."

"I don't ridicule anyone's opinion because I respect it and all I'm saying is please also respect mine," Doutzen pointed out. She further stressed, "Unity in unconditional respect is what is so needed!"

Near the end of her lengthy note, Doutzen questioned the next step "if this system is not welcoming [her] anymore because [she] chooses to listen to [her] gut feeling and to listen to the other narrative and scientists that are being censored." She penned, "Being pushed out or taking the step myself? I want alternatives and I'm going to look for them."

"I'm done [convincing] anyone, this is not my place but at least now you know where I stand," Doutzen concluded her post. "I want to live my life in sovereignty but don't know how and I'm sure many of you feel the same. I love you all [love]."

Doutzen landed in hot water after she publicly shared her thoughts about the coronavirus vaccines. "Other people have given me hope and strength with their courage to stand up for our rights. They touched my heart and inspired me to do the same," the model wrote on September 17. She then confessed, "So although my hands are shaking while writing this, I feel it is time to choose courage over comfort and speak my truth: I will not be forced to take the shot."

After many social media users criticized her post, fellow model Gisele Bundchen stood by her. "I know Doutzen, and she is a kind and loving person," the 41-year-old beauty said in the comment section. "I can't believe the hate being directed at her because she expressed her feelings."

Gisele added, "It saddens me to see all the judgment and the lack of empathy in so many peoples hearts. Hate is not [the] answer." "The Devil Wears Prada" actress then suggested the internet trolls to accept different opinions, stating, "The only way we can create a better world is [through] compassion and acceptance."