The 'On the Floor' songstress is seen wearing her Harry Winston accessories while posing in a bright yellow bikini aboard a yacht in the Mediterranean with the 'Justice League' actor.

AceShowbiz - Jennifer Lopez seemed to bring back a sentimental accessory from the early Bennifer days. During her European birthday trip, the "Hustlers" actress was spotted re-wearing a diamond bracelet gifted from Ben Affleck in 2002.

On Friday, July 30, a Twitter user @jloaffleck posted pictures of the 52-year-old actress wearing the Harry Winston bracelet while she was posing in a bright yellow bikini during a yacht vacation in the Mediterranean. The same account also spotted Ben re-wore his silver watch from his girlfriend's "Jenny From the Block" music video. 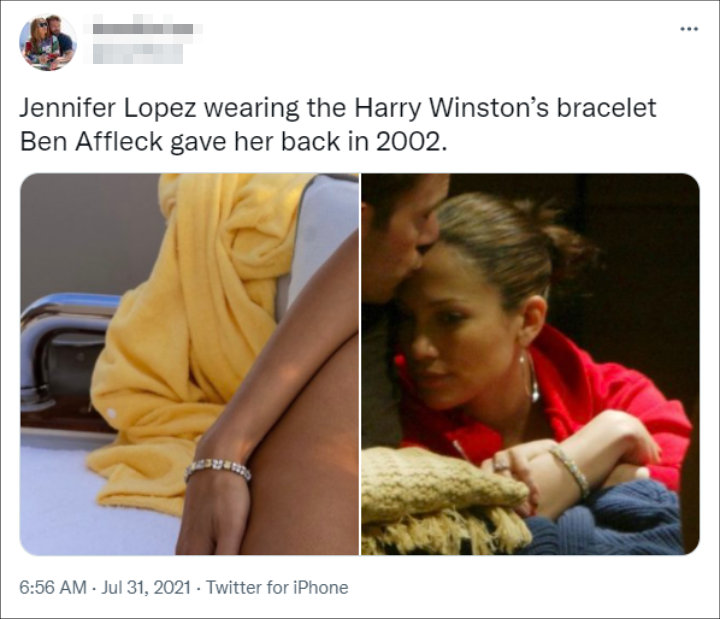 This was not the only symbolic sparkle J.Lo has sported during the getaway. On July 26, "The Boy Next Door" actress stepped out in Monaco wearing a gold necklace that spelled out "BEN" in big block letters.

The pop star, who made her relationship with the "Justice League" actor Instagram official on July 24, also unveiled a special Foundrae necklace for her 52nd birthday, which Ben had made with pendants symbolizing "resilience," "the risk we assume for something we love" and more. Of the customized accessories, Foundrae's creative director Beth Bugdaycay said, "With the custom piece Ben created for Jennifer, it clearly communicated their love, but it's also a reminder of their capacity for change and growth."

Of J.Lo and Ben's rekindled romance, a source said that their "relationship is serious." The source revealed to Entertainment Tonight that the pair, who were engaged from 2002 to 2004, "have insane, on another level, chemistry." The so-called inside source also claimed, "They are both super passionate and are head over heels with each other, just like they once were."

"This time around, however, they both really feel like this is it. Everything feels 100 percent natural with them. Once they rekindled, it was like no time had passed," the source continued. "They couldn't be more in agreement. They feel at this point in their lives they were undeniably made for each other."

Offering more details, the informant spilled, "Things between Ben and Jen have been easy and that's what makes their relationship work so well. They work seamlessly together and it's like their relationship hardly takes any effort." It's also said that things go rather smoothly for the lovebirds. "Nothing has been supremely difficult, and they don't tend to bump heads. They are always working as a team and they love that about each other and their relationship," the insider noted.