Krista Keller claims that the 'Lip Sync Battle' co-host 'never' tries to personally reach out to her former 'Couples Therapy' star daughter in the wake of her bullying scandal.

AceShowbiz - Courtney Stodden's mother has spoken out about Chrissy Teigen's bullying scandal. During an interview, Krista Keller revealed that she wants the "Lip Sync Battle" co-host to make a "direct apology" to her former "Couples Therapy" star daughter.

In an interview with Fox News on Thursday, May 13, the 61-year-old shared her thought on the model's recent public apology over the bullying revelation. "I am happy [Chrissy] apologized, but I hope it is sincere," she stated. Still, she stressed that her daughter deserves a "more genuine" atonement. "[Chrissy] should directly apologize to [Courtney], not only publicly," she pointed out.

On Wednesday, May 12, Chrissy took to Twitter to express regrets about her past remarks to Courtney. In a series of tweets, she wrote, "Not a lot of people are lucky enough to be held accountable for all their past bulls**t in front of the entire world." She continued, "I'm mortified and sad at who I used to be. I was an insecure, attention seeking troll. I am ashamed and completely embarrassed at my behavior."

"But that is nothing compared to how I made Courtney feel," Chrissy went on to admit. The 35-year-old mother of two further promised, "I have worked so hard to give you guys joy and be beloved and the feeling of letting you down is nearly unbearable, truly. These were not my only mistakes and surely won't be my last as hard as I try but god I will try!!"

Chrissy additionally claimed to have "tried to connect with Courtney privately." She added, "But since I publicly fueled all this, I want to also publicly apologize. I'm so sorry, Courtney. I hope you can heal now knowing how deeply sorry I am." 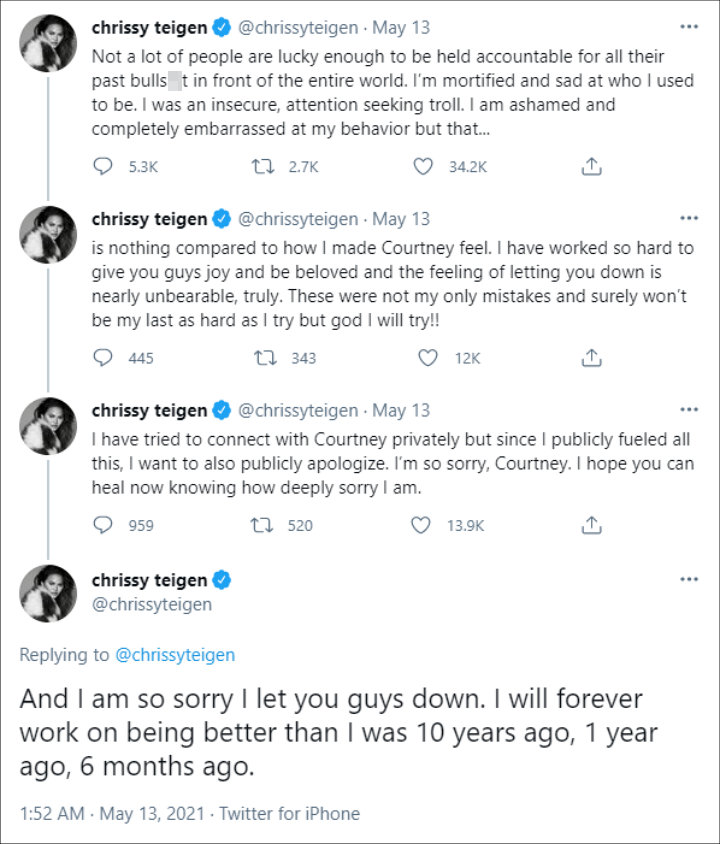 Despite Chrissy's Twitter claim, Krista told Fox News that Courtney "never" heard anything from the wife of John Legend. Contradicting the "Chrissy's Court" star's statement, she said, "That is not true. Her reaching out is not a true statement."

Insisting that Courtney was telling the truth about Chrissy, Krista said, "I witnessed some of those tweets when they came to Courtney. We both were shocked that [Chrissy] was doing this to Courtney." She went on to speculate the motive behind Chrissy's hurtful remarks as saying, "I believe jealousy was the cause of this. When Courtney first came on the scene she was trying to pull her down."

Krista's interview came after Courtney, who came out as non-binary in April, revealed in a profile piece published by The Daily Beast that Chrissy used to tell them to kill themselves. "She wouldn't just publicly tweet about wanting me to take 'a dirt nap' but would privately DM me and tell me to kill myself," they recalled. "Things like, 'I can't wait for you to die.' "