The 'Big Sick' star is body shamed after posting a holiday picture showing his muscular arms underneath his long-sleeve T-shirt, with some coming to his defense.

AceShowbiz - Kumail Nanjiani has once again sparked a social media debate over his body transformation. The actor has been accused of using steroids to bulk up after he shared a new picture that gave a hint at his buffed physique in a new year post.

In the said image posted on Instagram on Friday, January 1, the Pakistani-American comedian/screenwriter showed his muscular arms underneath his long-sleeve T-shirt. He wrote in the caption, "Happy new year! I celebrated with a pandan tres leches cake from @marysmakeshop that made me rethink everything."

"I only eat Pandan tres leches cakes from here on out. Hope everyone had a good and safe NYE. Here's to a better 2021 for us all," he added, before addressing how the COVID-19 situation has affected his appearance, "And yes the hair is getting out of control. I don't know what to do."

Many haters have since taken to Twitter to speculate that Kumail took steroids to bulk up. Some others body shamed him for his transformation, which he did for his role in upcoming Marvel movie "The Eternals".

"Kumail used his multimillion dollar net worth to add bones to his skull and we're not supposed to laugh at him doing all this for the third lead in a marvel movie that very well could be the box office bomb that permanently derails the structures of modern cinema," one wrote.

Another user posted a thread weighing on the discussion. "The Kumail Nanjiani thing makes me very sad. Our culture has created a system where people attempt to conform to impossible beauty standards to a point where it starts to render them unrecognizable, and then we mock and shame them. Men are not exempt from this," the said user wrote.

She added, "We make it so that performance enhancing drugs or plastic surgery are all but mandatory for certain professions or beauty standards, but admitting to them is taboo. Too little of these things and you're ugly, just a hair too much of them and you're grotesque. It's a nightmare." 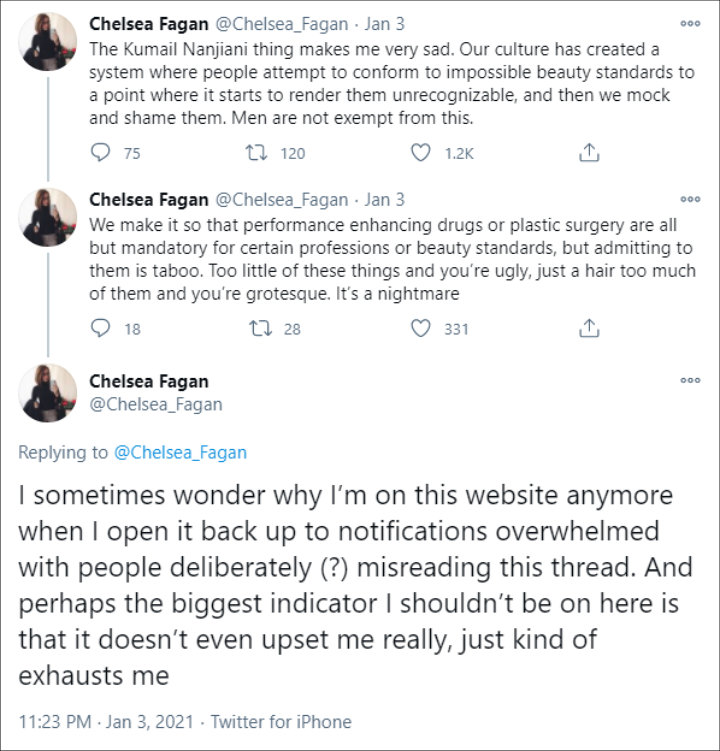 A Twitter user weighed in on Kumail Nanjiani's body transformation.

It's unclear if the said user was defending Kumail against the haters or further criticizing him, but actress Erin Cummings disagreed with her. Replying to the original tweet, she wrote, "Hey Twitter friends! Here's an ex of what we're going to try NOT to do in 2021: Kumail Nanjiani has been minding his business, openly sharing how he & his wife have been isolating because of her medical condition & that he's been working out a lot at home to prep for a film..."

She continued, "...and then along comes a stranger who has no connection to him, his family, his doctor or his life in any way. For some reason, this stranger thinks it's okay to publicly comment on his body & his mental state, covertly accusing him of steroids & plastic surgery."

"How about we try not commenting on people's bodies good or bad if they aren't asking? If someone posts a thirty shot & asks, 'do I look hot,' hey - go for it. But it's grotesque to comment on someone's body when they simply post a picture of themselves EXISTING," the "Dollhouse" alum went on clapping back at the critics.

She urged, "Let's not forget that it wasn't that long ago that people were making derogatory comments on this same platform about Chadwick Boseman's weight loss before anyone knew that he was quietly suffering so greatly. Someone else's body is not a commodity for you get 'likes.' Get a life. X." 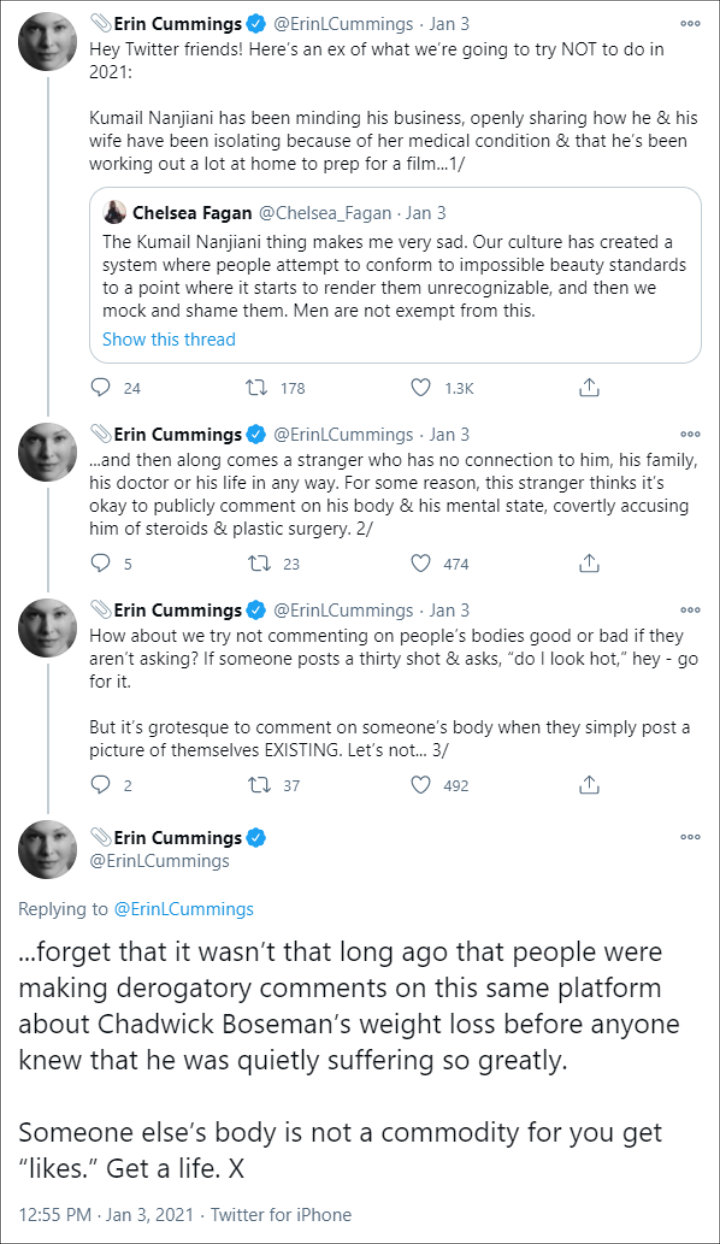 Some others, meanwhile, labeled the criticism as racist. "Kumail Nanjiani looks awesome af and I wish I looked as half as good as him. Y'all clearly didn't learn your lessons from making fun of Chadwick Boseman's physical appearance. Notice how y'all only make fun of the men of color, but not your white favs," one pointed out.

Another compared Kumail's body transformation for his film to that of Chris Evans for Captain America, Chris Hemsworth for Thor and Chris Pratt for Star-Lord, and claimed that the other three others didn't face the same accusation. "Kumail Nanjiani gets jacked for Eternals: 'He's clearly using steroids.' I can't qwhite see what's the difference," the said user protested.