The husband of 'Modern Family' star Sofia Vergara debuts his new hair through a gym selfie as he might be preparing himself for his role as Deathstroke in 'Zack Snyder's Justice League'.

AceShowbiz - Joe Manganiello has stunned Jesse Tyler Ferguson with his brand new look. On Wednesday, November 4, the "Magic Mike XXL" hunk showed off his blue mohawk transformation, and it got his wife Sofia Vergara's co-star on "Modern Family" to express his shock over the bold color choice.

Joe debuted his new hair when treating his Instagram and Twitter followers to a gym selfie. In the accompaniment of the snap, he wrote, "Time to go to work…," which was likely to be a reference to his upcoming role as Deathstroke in "Zack Snyder's Justice League". His post was quick to catch Jesse's attention who responded by tweeting, "YOU DYED IT BLUE?!?!?!" 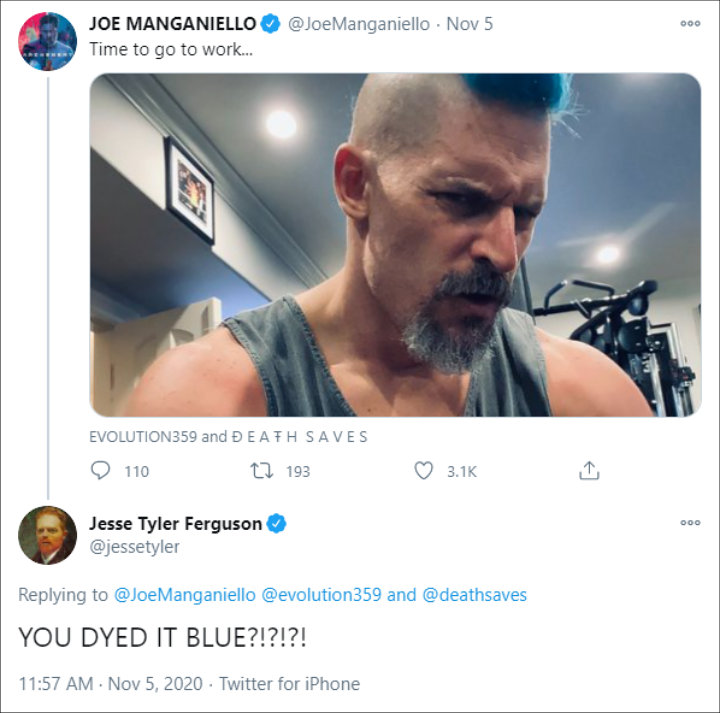 The 43-year-old actor's major change also left social media users curious. One Twitter user asked, "Dude, who are you? What have you done w/Joe?" Another expressed similar sentiment, "Damn! What the f**k you working on? Demigod status?" A third wondered, "What have u done?! New movie or something????!"

Joe's hair makeover came after he showed off his blonde mohawk via Instagram on October 26. Alongside a picture of him cradling a puppy in a white blanket while sitting on the sofa, the Alcide Herveaux of "True Blood" noted, G'night #jordanonebanned." It was taken when he accompanied his wife to the "Modern Family" reunion.

Two days before, Sofia let out a picture on her Instagram page that saw her posing next to her husband and former co-stars Jesse, Julie Bowen and Sarah Hyland. "Thank u @jessetyler @justinmikita for our first Modern Fam reunion!!" she wrote in the caption. "missing half of the gang!!! But so much fun!!!"

As for his Deathstroke part, Joe has been rumored to be involved in Zack's movie for quite some time. When asked about it in an interview with Collider, he simply stated, "If I was a part of it, that wouldn’t be my place to announce that. That would be Zack's place. So, whether or not that's happening, that is an answer that is below my NDA level, or whatever you wanna call it."

'KUWTK': Kendall and Kylie Jenner Reconcile After Not Speaking for a Month Following Big Fight

Safaree Samuels Admits to Being 'Childish' With 'Divorce' Post