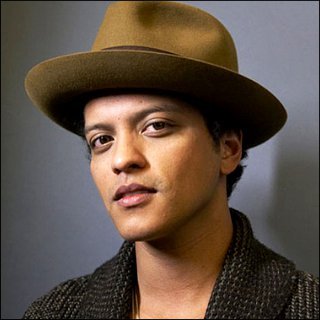 Peter Hernandez Jr. was a music fan since he was just a kid. From a young age, he was impersonating and performing songs by influential artists such as Michael Jackson and Elvis Presley. He was even named Little Elvis in MidWeek magazine and tapped to play the younger version of the late singer in 1992 movie "Honeymoon in Vegas".

Despite having experience of acting in front of camera, Hernandez decided to pursue career in music. Better known with stage name Bruno Mars, he wrote many hit singles for other artists before laying vocals for his own track. He co-penned Flo Rida's "Right Round" and K'naan's "Wavin' Flag" among others.

In addition, he served as featured guests in B.o.B's "Nothin' on You" and Travis McCoy's "Billionaire". Both songs successfully brought his two pals to stardom and introduced himself as a solo recording artist. Enough with working for other musicians, he decided to work on his own record.

A debut album called "Doo-Wops & Hooligans" is due in United States on October 5, 2010. The lead single "Just the Way You Are" climbed to No. 9 on Billboard Hot 100. The album was preceded with an extended play "It's Better If You Don't Understand" which came out in May in the same year.

"Doo-Wops & Hooligans" reached No. 3 on the Billboard 200 chat, and its follow-up singles, "Grenade" and "The Lazy Song," cracked the top 10 on the singles chart. Mars scored another hit in late 2011 with "It Will Rain", a song that he contributed to "The Twilight Saga: Breaking Dawn - Part 1" soundtrack.

Mars went on to pick up several Grammy Award nominations for his debut effort, including for Album of the Year. While he went home empty-handed, Mars gave a career-building performance at the 2012 telecast. His energetic performance of his 1960s-influenced song "Runaway Baby" had even the most jaded music industry veterans moving in their seats.

Mars returned with new album in December 2012. His sophomore record, "Unorthodox Jukebox", received both commercial and critical acclaim. Marking his first No. 1 album on Billboard 200, it featured a bunch of hits including lead single "Locked Out of Heaven" which topped the Billboard Hot 100 for six consecutive weeks and won an MTV Music Video Award for Best Music Video.

The project's second single, "When I Was Your Man," also peaked at No. 1 on the Billboard Hot 100. Another cut titled "Treasure" won an MTV Award for Best Choreography in 2013. At the 2014 Grammy Awards, the album helped Mars earn the Best Pop Vocal Album Award.

Later in 2014, Mars returned to the top of Billboard's singles chart with Mark Ronson's "Uptown Funk". The upbeat track, created for the producer's album, spent multiple weeks atop the list and landed at No. 1 in numerous countries.

Mars, who first headlined Super Bowl in 2013, returned to the game in 2015 along with Beyonce Knowles to support headliner Coldplay. However, his new music didn't come out until October 2016, when he put out "24K Magic". It served as the first single and the title track of his third studio installment and was promoted with a live performance on "Saturday Night Live". The song sat at No. 5 on Billboard Hot 100.

At the same time of the release of his album "24K Magic" on November 18, 2016, Mars made his first TV appearance in four years. He appeared in an interview segment on CBS' "60 Minutes", on which he talked about his new album and his humble roots. The album itself received positive reviews from music critics and debuted at No. 2 on Billboard 200 chart.

Mars released the second track off the album "That's What I like" on January 30, 2017. Even though it topped the Billboard Hot 100 chart, it was less successful in international market than the previous track. He then released third track "Versace on the Floor", which reached the top 35 of the Hot 100.

In March 2017, Mars embarked on a world tour in support of the album. The tour is set to wrap up on July 14, 2018. And in September, Mars announced that he would be starring on his first primetime TV special concert titled "Bruno Mars: 24K Magic Live at the Apollo". The one-hour special, which was produced by Fulwell 73 productions, aired on November 29 on CBS.

2017 was a successful year for the singer, as he received so many awards for his music. In addition to being given the Visionary Award at the 2017 Teen Choice Awards, he was dubbed the biggest winner at 2017 American Music Awards and Soul Trains Awards. Also in the same year, Mars donated $1 million to help the victims of the Flint water crisis. The singer also participated in Jennifer Lopez's "Somos Una Voz", which was founded to help survivors of the Hurricane Maria in Puerto Rico.

Welcoming 2018, Mars released a remix version of track "Finesse" featuring super rookie Cardi B. The track debuted at No. 35 on Hot 100, marking the highest debut on that week's chart. Continuing the success from last year, Mars was dubbed the biggest winner in music categories at NAACP Image Awards.