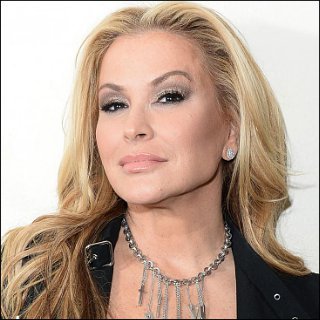 Spotted performing at Monaco's Red Cross gala in early August 2005 while also was busy to hold her 2005 Summer Encore Tour around Europe, Anastacia set out to hit the U.S. market through the release of her self-titled album on August 30, 2005. As she already came up with some music videos which featured 4 tracks of the upcoming album, it was expected that this particular piece of work would repeat the success of her two previous albums. Looking upon her accomplishment in making collaboration with Ben Moody on "Everything Burns," the soundtrack of the 2005 blockbuster superhero movie "Fantastic Four," the road ahead would surely run smoothly for her.

Born on September 17, 1973 in Chicago, Illinois, Anastacia Lyn Newkirk is the second daughter of Robert Newkirk and Diane Hurley. Since her parents were deeply involved in the entertainment industry, she gradually developed an interest in arts, especially singing and dancing. "I come from a very artistic family," she said. "My father was a singer on the Catskills hotel and East Coast nightclub circuits. My mother is an actress who worked in musical theater and on Broadway. It wasn't as though I've wanted to be a singer all my life, but I grew up in an atmosphere of artistic expression and encouragement."

When her parents decided to separate, Anastacia was taken to New York by her mother at the age of 14. Studying at the Professional Children's School in Manhattan, she began to develop her dance skills although she previously had been diagnosed with Crohn's Disease. Together with her older sister, Shawna, she performed regularly at a dance club in New York called 1018. During this period, she also appeared on Club MTV and worked as a dancer to Salt-N-Pepa, appearing in two of the rap group's videos, "Get Up Everybody, Get Up" and "Twist and Shout."

She started to draw people's attention when singing Oleta Adams' "Get Here" in BET's "Comic View" hosted by D.L. Hughley in 1992. Some music producers approached her to offer a record deal, including O.G. Pearce who later produced her song, "One More Chance." Despite this collaboration, she politely refused to join Pearce's production company most likely because he wanted her to conform to his idea of who she should be. "I've worked with people who tried to get me to sing like Celine Dion or LeAnn Rimes," she recalled. "But it didn't sound right - it was like taking away my character."

It wasn't until Anastacia met Lisa Braude that her star began to glow. Braude, who later became her manager, encouraged her to join MTV's "The Cut," a show which was styled after "Star Search," in 1998. She surprisingly made her way to be one of the ten finalists, performing her own composition entitled "Not That Kind." Even though she did not win the contest, she had successfully impressed some notable artists, like Michael Jackson as well as the show's judges that included David Foster and Faith Evans. This afterwards led her to sign with Daylight Records, one of Epic Records' labels, by March 1999. Backed up by leading American producer/writers, she released her debut album, "Not That Kind," on June 13, 2000. This piece of work brought her name to the surface as one of its songs, "I'm Outta Love," satisfyingly reached the 2nd rank at Billboard Hot Dance Music/ Club Play. The title track also did well, sitting at number 9 on the same music chart. In the meantime, the album gained a massive international success as it was included in the top ten chart lists in eight countries while was certified triple Platinum in Australia. Her delight doubled when she was named the Best Selling International Artist at the 2000 World Music Awards.

In May 2002, Anastacia came up with her sophomore album, "Freak of Nature." Containing 12 tracks which were all co-written by her, it surpassed the attainment of its predecessor in U.S., entering the top 30 of The Billboard 200. Moreover, it also received double Platinum in U.K. and sold for 10 million copies worldwide. This undoubtedly boosted her career, taking her directly to the spotlight of fame. Her popularity grew larger as she was selected to sing "Boom," the theme song of the 2002 FIFA World Cup, and performed the soundtrack of Oscar winning film "Chicago" (2002) entitled "Love is A Crime." She once again earned a World Music Award; this time on the category of Best New Artist in the same year.

In early 2003, Anastacia shocked the whole world as she announced that she had a breast cancer. After going for an operation, this strong willed artist was informed that she would be physically drained during the course of treatment. Knowing that it would make her extremely exhausted, she insisted to continue working on her third album instead. "It was tough," so she described the hard times she had to pass through. Nevertheless, the result was marvelous as the self-titled work was launched into the international market on June 29, 2004. It instantly soared to the top spot of the album charts in U.K., Australia, Holland, Germany, and Italy.

By 2005, this talented singer has collected 42 Platinum and 16 music awards from the international events. Through her three albums, she has sold 26 million copies worldwide, certainly making her as one of the best-selling female artists in the planet. Apart from her career, she formed Anastacia Fund which has been established in the Breast Cancer Research Fund while actively involved to raise younger women's awareness of breast cancer. After that she released a greatest hits collection titled 'Pieces of a Dream' in late 2005, spawning the single 'I Belong to You' that became a hit in Europe. Despite its success in Europe, the album was not released in United States.

As for her private life, she once dated actor Shawn Woods for seven years before ending the relationship in 2001 after she found him in bed with another woman, which presumably explained the song "Why'd You Lie to Me". After that she dated German MTV presenter Patrice Bouedibela for over a year before eventually gave her heart to her bodyguard Wayne Newton, whom she married on April 21, 2007 in Mexico.

Her return to music was marked by a participation in Concert for Diana on July 1, 2007 as well as a big collaboration in Annie Lennox's charity single "Sing" in the same year. Anastacia confirmed a work of fourth studio album album through a video stream that was posted by her designer friend, s. Oliver.