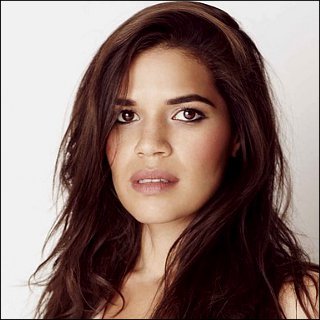 %cAmerica Ferrera% comes to light after her involvement in "The Sisterhood of the Traveling Pants" in 2005 and ABC's TV series "Ugly Betty" the next year. She has been acting since she was eight and the Aries lady has won several awards like Golden Globe Award as a Best Performance Actress and also was chosen as one of People's magazine annual 100 Most Beautiful People in the world in May 2007.

America Georgina Ferrera, is the the youngest child from six siblings. Having 4 sisters and one brother, she was born the last on April 14, 1984. Her parents are Honduran who emigrated to United Stated in the mid 1970s. Her mom worked at a hotel as a house cleaning staff but her father walked out from the family when she was a child. Recalling the story, Ferrera said "It wasn't easy, but as a kid you find ways to make sense of it. It wasn't until I was older that I thought, 'Damn, I never really grieved over that'. And there have been male figures in my life who provided that kind of fatherhood role for longer than he was ever in my life." Her mom channeled her children to gain knowledge from school and to pursue higher education, that's why five of them have graduated from college.

Ferrera was born in Los Angeles, California and was raised in Woodland Hills. She started acting at age eight, performing for school plays and community theaters. She went to George Ellery Hale Middle School and El Camino Real High School in Woodland Hills where she played a small role in a school production of "Hamlet". From that experience she knew that she wanted to be a performer, and then she joined more school plays and community theater in Los Angeles. Her mom helped a lot for her career by driving Ferrera to perform since she saw the dedication in the struggling actress.

In July 2002, she made her first TV movie appearance on "Gotta Kick It Up" for the Disney Channel and she made her feature film debut on the indie sleeper hit "Real Woman Have Curves". Just like her siblings, Ferrera also paid extra attention to her education. She took International Relations in University of Southern California, and also studied in the American University Washington Semester Program in autumn 2004. Ferrera followed her success in acting when she played on "Touched by an Angel" and films "The Sisterhood of the Traveling Pants" as well as "Lords of Dogtown". The young actress eventually received a 2005 Movie Line Breakthrough award in late 2005 after she appeared in the off Broadway play "Dog Sees God: Confession of a Teenage Blockhead" while she was attending New York University in 2006.

Continuing her success, she played as Betty Suarez in "Ugly Betty" in 2006, an adaption from a novel titled "Betty La Fea" in which she portrays an ugly woman. Ferrera must wear old fashion clothes, curly hair and make up to make her ugly. She said, "It's definitely a costume. I wear a wig, I wear braces and glasses and exaggerated clothing, and I also bush up my eyebrows. But unfortunately, it only takes me an hour to get into costume, so I'm only an hour away from Ugly Betty myself!" For her role in "Ugly Betty", she won the 2007 Golden Globe for Best Performance by an Actress in a Television series- Comedy or Musical, and has beaten other big nominees such as %cMarcia Cross%, %cFelicity Huffman%, %cJulia Louis-Dreyfus% and %cMary-Louise Parker%. In January 2007, she won the prestigious Screen Actor Guild Award for Best Female Actor in a Comedy series for the same role. She also starred in and executive produced the poignant short film "Muertas".

Ferrera has been in relationship with Ryan Piers Williams since they were in college. William is an aspiring film director from Texas and was an assistant director of Steven Soderbergh in 2007. They first met while working on his student film at USC. She said, ''He makes me very happy. There's nothing more valuable than having someone in your life who reminds you who you are, and he does that. I love that we don't need to be together, but that we want to. That was a really hard lesson for me to learn in high school. Finding and having a boyfriend in high school was the thing that made a girl feel worthy. In a good relationship, you can live without them, but when they are there, it's because you want them to be. I think that's a great lesson for girls. You have to love yourself before anyone else can really love you. I think that's the only real truth that I know."