The suspension comes after she weighed in on Nicki Minaj v. Latto's Grammys drama, with her telling the Trinidadian raptress to get 'some rehab and mental health services.'

AceShowbiz - Fans can no longer find Azealia Banks on Instagram. The "Anna Wintour" raptress' account on the photo and video sharing app disappeared just a few hours after she denied rumors she got banned.

On Sunday, October 16, eagle-eyed fans found the 31-year-old hip-hop artist's account on Instagram was gone, with a notice that read, "Sorry, this page isn't available. The link you followed may be broken, or the page may have been removed."

The notification popped up just hours after Azealia denied reports that she got suspended by the platform. "You thought…… lol," she wrote via Instagram Story. She later uploaded a snapshot of her performing for an amped-up crowd while wearing a bold hot pink outfit. 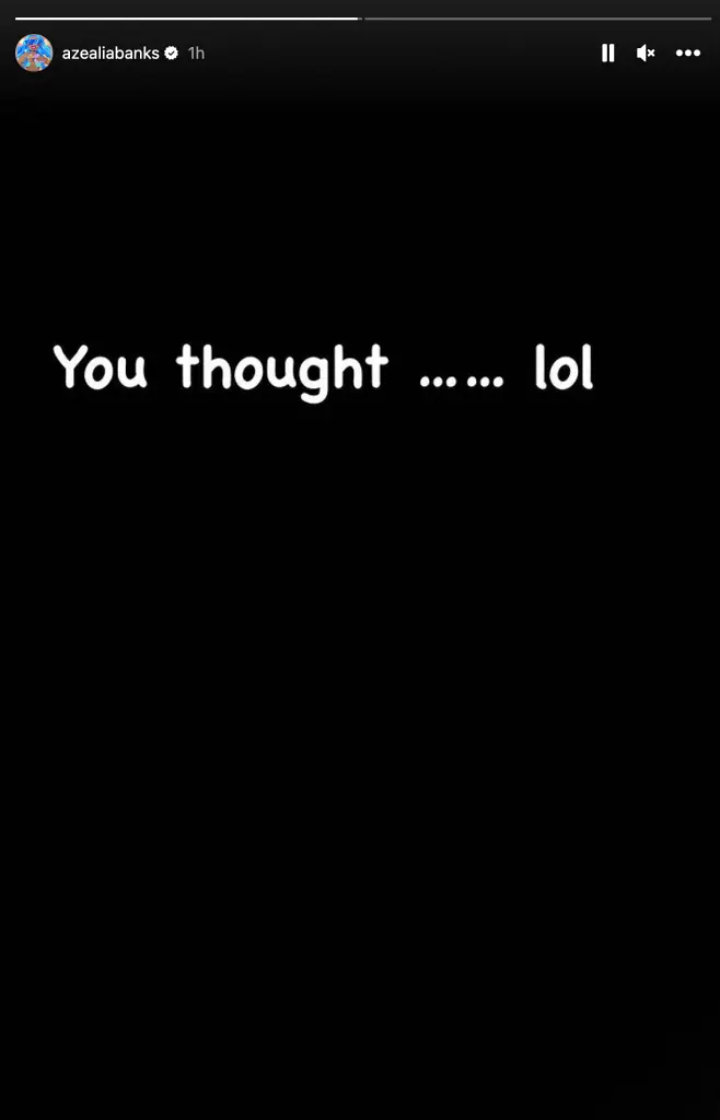 Azealia Banks denied ban rumors before her account got removed by the platform.
Editors' Pick

Azealia's Instagram ban didn't come as much of a surprise to the world, particularly since she's made no effort to hold her tongue when sharing her thoughts about celebrities like Beyonce Knowles, Jay-Z, Nicki Minaj, Lil Nas X, Kanye West, Sean "P. Diddy" Combs and countless others.

In her most recent rant about Nicki's feud with Latto (Mulatto), Azealia urged the Trinidadian raptress to get "serious help." The "212" spitter wrote, "The Barbz need to petition to get Nicki Minaj some rehab and mental health services through the Grammys music cars program."

"It's becoming painstakingly clear that this woman needs serious help, because this level of anger is not normal at all," Azealia continued. "It's getting scary watching her spiral like this with a child in tow."

Azealia went on elaborating, "Like imagine how lonely and confused her kid feels hearing her scream and rage 24/7." She continued, "There's no way he's getting the attention/love he needs from her when she is this consumed with anger. I feel really really bad for the kid. Clearly other women are more important to her than [her child] is."

Nicki and Latto exchanged words on Twitter on October 13 after Nicki called out the 2023 Grammy Awards for placing her "Super Freaky Girl" single in the category of Best Pop Solo Performance rather than in any rap categories. The "Super Bass" hitmaker also made the ultimatum that if "Super Freaky Girl" wasn't going to be considered for any rap categories, neither should Latto's "Big Energy". Later, Latto asked Nicki to stop dragging her name, but Nicki refused. Things became chaotic afterwards.

Stray Kids Snags Second No. 1 Album on Billboard 200 With 'MAXIDENT'