The 'Hamilton' creator and star records a message for a teen's favorite teacher at Centennial High School after he had to skip class to hang out with the former.

AceShowbiz - Lin-Manuel Miranda made an Atlanta, Georgia history teacher's day last week (ends October 1) when he sent her a cellphone video thanking her for allowing one of her students to skip class.

The "Hamilton" creator and star was hanging out with voting rights activist Tamara Stevens and her son, Luke, when the teen asked him to record a message for his favorite teacher at Centennial High School.

The video, in which Lin-Manuel states, "I'm sorry, he can't be in U.S. history class right now, but he is with me," has since gone viral.

"We're gonna go over Bill of Rights and anything you may be covering, right now," he relayed to teacher Ms. Rosner. "We cover a lot of it in about two-and-a-half hours in 'Hamilton', but we're gonna go over it in specifics now, so this is not lost time."

Rosner responded with this overjoyed text, "OMG!! I AM FREAKING OUT DURING THE TEST AND I CAN'T SCREAM. Tell him I just saw the show for the first time and I love it! I am so happy right now!"

Tamara shared the clip via her Twitter account on Thursday, September 30. Along with it, she tweeted, "When my son told his US History teacher that he wasn't gonna be in class yesterday because @Lin_Manuel was having lunch at our home, she didn't believe him. She does now! @FultonCoSchools @The_CHSKnights."

Lin-Manuel Miranda sent a message to a history teacher.

Minutes later, Tamara let out a screenshot of Rosner's text response in a tweet that simply read, "Ms. Rosner is a very happy US History teacher now!"

John Legend Signs On As Producing Team of The Temptations Musical 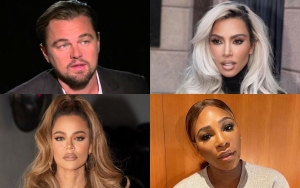