The 'In the Heights' mastermind cannot help but think of his late fellow actor, who died of the 'terrible virus,' when delivering his speech at the vaccination site for Broadway actors and staff.

AceShowbiz - Lin-Manuel Miranda is keeping fellow Broadway star Nick Cordero close to his heart. When attending the grand opening of a Times Square COVID-19 vaccination site, the creator and star of Broadway mega-hit "Hamilton" took a moment to remember the "Rock of Ages" star who died of coronavirus.

On Monday, April 12, the 41-year-old actor/playwright stood by Mayor Bill de Blasio's side to offer his full support to the revitalizing of New York City's entertainment industry. At the event, he somberly reminded others about "Waitress" star Cordero, "who is my age," who lost his battle against the virus in July 2020.

Miranda also credited playwright legend Terrence McNally who also passed away because of the virus. "We want to tell stories in the dark, and we can't do that if we don't feel safe and you don't feel safe. So the first step in that process is getting our vaccination shots, and the next steps will follow," he stated. 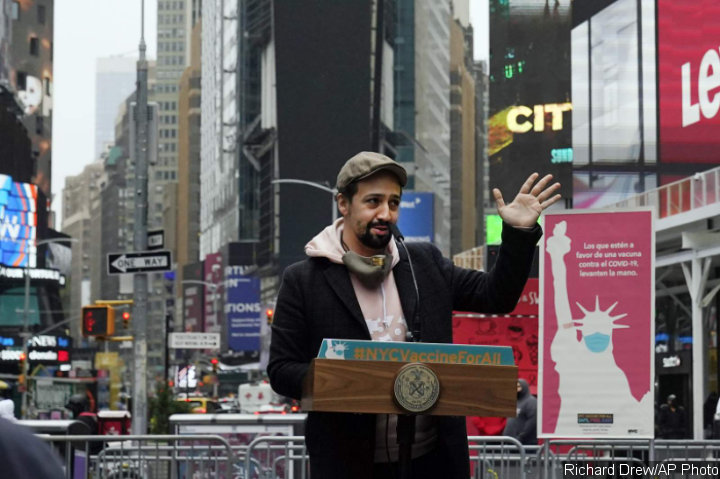 The Tony Award winner delivered his speech after singing performances by Charl Brown of "Motown", Joel Perez of "Fun Home", Kris Coleman of "Jersey Boys" and Matt Amira of "Beautiful". The quartet sang the classics "On Broadway" and "New York, New York".

Miranda said that the performance was the first live show he had seen "in a year and a half." To the about 30 socially distanced audience, he admitted, "So I'm emotional today." The invite-only concertgoers were cordoned off from the street with metal.

Mayor Bill de Blasio also took the microphone to say that the new Times Square vaccine site will be open to workers in theater, film and TV. Stressing the values of entertainment industry, he pointed out, "Yes, it's part of our economy. Much more importantly it's part of our identity." 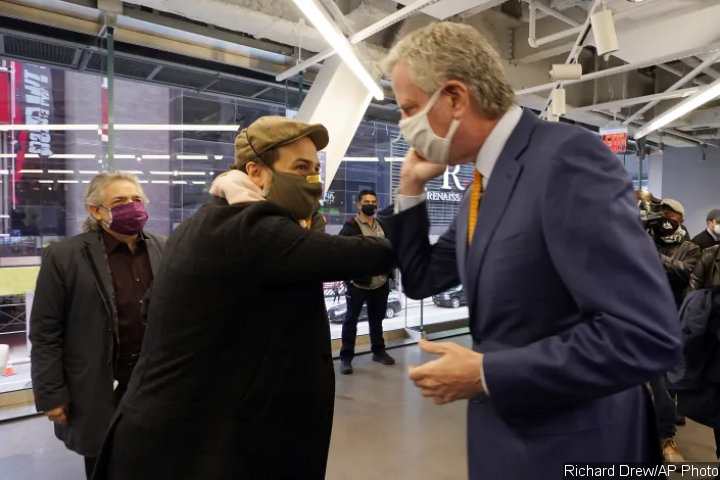 "It's part of who we are, it's part of our hearts. What it means in this city, the theater, the music, the dance, the film and TV, it is our expression of everything that is New York City," the Mayor continued. "It's our creativity, it's our heart and soul. We do something here that does not exist anywhere in the world quite like this."

This new vaccine center is located in Duffy Square on Seventh Avenue between West 47th and West 48th streets in the heart of the Manhattan theater district. It was intended for stage and screen workers.