The 'Keeping Up with the Kardashians' alum reveals that she has stopped getting 'Brazilian blowouts' and other straightening treatments during the coronavirus pandemic.

AceShowbiz - Khloe Kardashian is embracing her natural hair texture. In a new selfie, the former star of the "Keeping Up with the Kardashians" debuted her curly locks after she straightened it since she was a "teenager."

On Friday, August 13, the Good American founder shared a snap of her untouched hair alongside a black-and-white throwback photo when she was at a younger age on her Instagram Story. "I've been getting straightening treatments on my hair for years," she explained. "I've been getting Brazilian blowouts and other treatments since I've been a teenager."

Khloe went on to tell her fans that she decided to give her hair a break from getting straightened during the coronavirus pandemic. "I stopped because of Covid," the reality star added. She then concluded, "I actually kinda like my curls [love]." 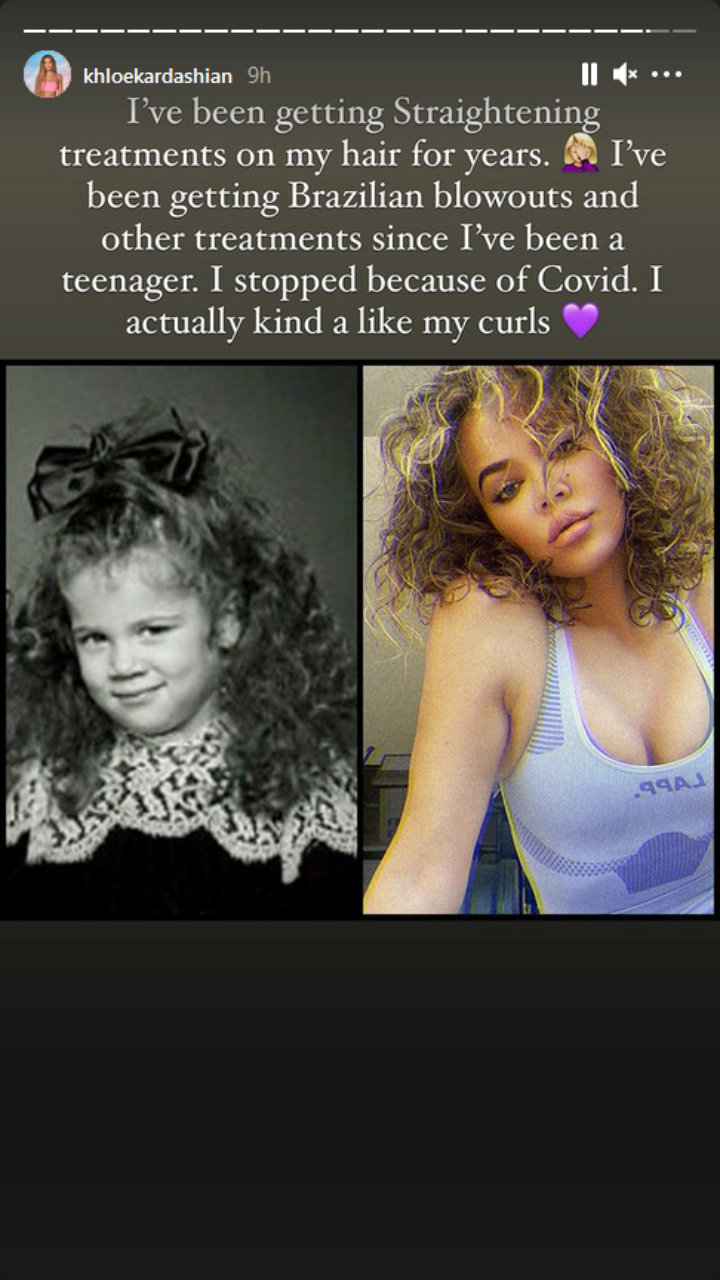 A few hours earlier, Khloe posted a similar photo, which was taken at the gym, on her Instagram feeds. In the caption, the 37-year-old star admitted that she loves her natural locks as saying, "I rarely wear my natural hair texture. Felt kinda cute with it (please don't ruin the feeling)."

Her post has since been flooded with many positive comments. Her younger sister Kendall Jenner left a sweet message that read, "I love your natural hair," to which Khloe responded, "If you comment, it's a big deal." Her mom Kris Jenner praised her look, saying, "You are the most gorgeous girl!!!!!!" In the meantime, her ex Tristan Thompson, with whom she shares her 3-year-old daughter True, added a set of smiling faces with heart-shaped eyes and red heart emojis.

Also complimenting Khloe's curly hair was Kobe Bryant's widow Vanessa Bryant, who wrote, "I [love] your natural hair. So pretty!" Gushing over the TV personality's look, celebrity hairstylists Andrew Fitzsimons and Jen Atkin joined in the comment section. Andrew said, "Your natural texture is my FAVORITE," while Jen chimed in, "ITS ALWAYS BEEN MY FAV."

Her fans shared a similar sentiment with many saying that Khloe should embrace her hair texture more often. "Yes!!! More of this hairstyle please," a user wrote, while another penned, "It is so cute! Please don't let anyone ruin your good feels!" A third advised, "Wear it more often. True will appreciate seeing it curly."