During a virtual hearing held on February 24, the 'Born in the U.S.A.' singer voluntarily pleaded guilty to a violation of consuming an alcoholic beverage in a closed area and agreed to pay a $500 fine.

AceShowbiz - Donald Trump Jr. Is taking issue with the dismissal of Bruce Springsteen's DWI charge. Upon learning that the "Born in the U.S.A." singer's counts on driving while under the influence and reckless driving have been dropped, the son of former president Donald Trump described the court decision as "liberal privilege."

The 43-year-old businessman offered his two cents on the matter via his Twitter account on Thursday, February 25. Retweeting an article about the resolution of the musician's DWI case, he tweeted, "Id say it's #WhitePrivilege but we all know it's really #LiberalPrivilege." 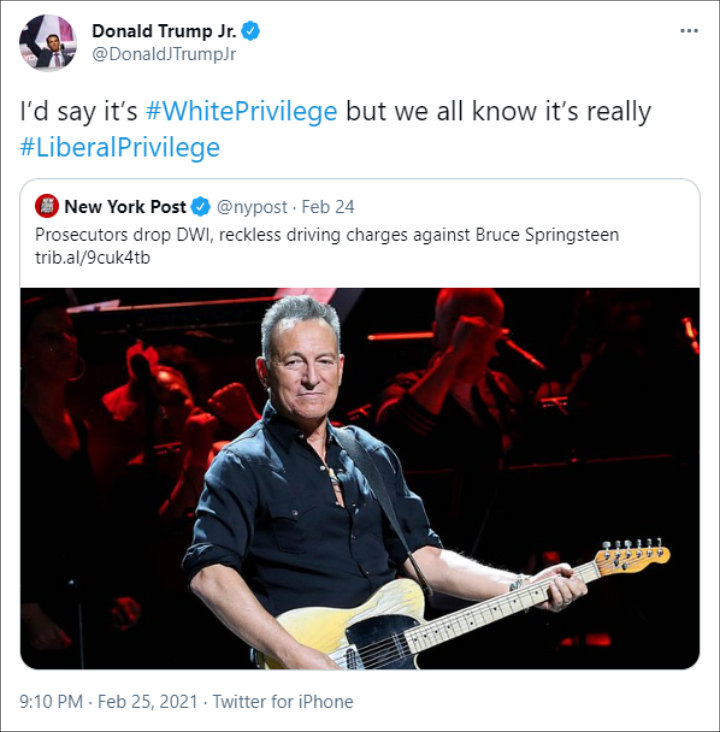 Trump Jr.'s comment came just a day after Springsteen, who was arrested with the DWI count in November 2020, pleaded guilty to consuming alcohol in a closed area. During a virtual hearing in New Jersey Federal Court, the rocker admitted that he had "two small shots of tequila" at Gateway National Recreation Area in Sandy Hook, New Jersey.

On the reason why the DWI and reckless driving charges against the "Brilliant Disguise" singer were dropped, it was claimed that his blood-alcohol level was just .02, below the limit of .08. He also agreed to pay a $500 fine and an additional $40 fee, telling the judge, "I think I can pay that immediately, your Honor."

The outcome of the hearing has brought good news for Springsteen's Super Bowl commercial. A spokesperson for Jeep said in a released statement to the press, "As we stated previously, we paused the commercial until the facts were established. Now, that the matter has been resolved, we are unpausing the film."

Springsteen's ad, "The Middle", was taken down by the automobile brand from its YouTube channel after a report of his DWI arrest surfaced. At that time, the company explained to the press, "It would be inappropriate for us to comment on the details of a matter we have only read about and we cannot substantiate."

"But it's also right that we pause our Big Game commercial until the actual facts can be established," its statement continued to read. "Its message of community and unity is as relevant as ever. As is the message that drinking and driving can never be condoned."