Seemingly in attempt to silence haters, Asian explains on Twitter why she's eligible for the title, writing, 'I use to wear his clothes I use to bang his set I talked like him since day1.'

AceShowbiz - Following the death of King Von, Asian Doll a.k.a. Asian Da Brat has been facing hate comments for claiming herself to be "Queen Von". However, despite the backlash, Asian, who reportedly broke up with the late rapper before he died, still insists that she deserves the title.

Seemingly in attempt to silence haters, Asian explained on Twitter on Thursday, January 14 why she's eligible for the title. "I use to rock shirts with Von name on it I use to wear his clothes I use to bang his set I talked like him since day1 been rapping like him he I been 'queen von/ granddaughter,' " so she said to her followers.

Asian went on saying, "I been posting this man everything I'm doing now I BEEN DID WHILE HE WAS HERE don't hate I'm blessed." 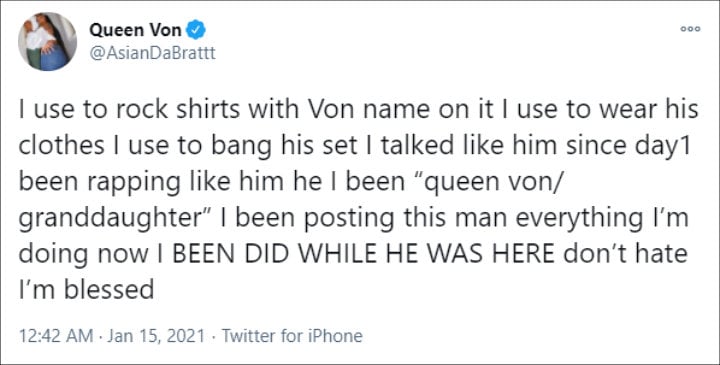 Still, the claims didn't sit well with some Internet users. "This man did a live Oct 31 saying he was single and be on and off with Asian. So he was not claiming nobody else," one noted in the replies. Accusing Asian of chasing clout, another person added, "U was apart of the master plan that shit was a set up . All u doing is making revenue off of him. Lol [lil durk] too, that song wit drake took him to the next level. Read between the lines... alotta industry s**t boutta hit the fan soon."

Some others, however, jumped into Asian's defense, saying that Asian was sincere to Von. "If y'all go back and look at their old videos this girl was literally obsessed with Von why tf would Asian be doing anything for clout. she been had clout before Von. some of these comments are stupid asf," one fan said.

Another fan shared, "I promise yaw weird to get on here and say some stupid s**t like she ain't been doing it or he didn't love her I only been following her for a few months and I know that s**t was love with them this girl you do yo s**t and let them hate cause you taking off f**k them."

One person also believed that Asian would still be damned if she moved on from the late rapper. "The hate is very much weird n backwards because if u would've said f**k von n moved on to a whole other n***a they would've been calling u a 'hoe' saying u 'ain't love him' but the fact that u damn near the only person keeping his name alive besides durk ,now ur doing to much," the person noted.

This is not the first time for Asian to face backlash as she's accused of clout chasing using Von's name. The backlash was severe to the point she was rumored to be suicidal because of it. "I will go somewhere real soon & find peace within myself," so she wrote in a concerning tweet. Asian, however, denied the speculations.

Asian Doll Claims to Be the Love of King Von's Life