Prior to this, the 33-year-old actress, who played Brittany on the TV series, called out a Twiter user who used a vomiting-face emoji to cover Mark, who commited suicide in 2018 amid child pornography case, in a photo.

AceShowbiz - Heather Morris issued an apology for making "insensitive" remarks involving her late "Glee" co-star Mark Salling. The actress took to her Twitter account to express her remorse for everyone who was triggered by her message as she called out negative comments about Mark.

"To all those who felt triggered by my message, I want to sincerely apologize for the harm I caused," so the Brittany of the popular TV show wrote in a statement. "Whether you, a friend, a family member has been a victim of pedophilia, I realize my words may have been insensitive to your experience and for that I can't express enough how sorry I am." 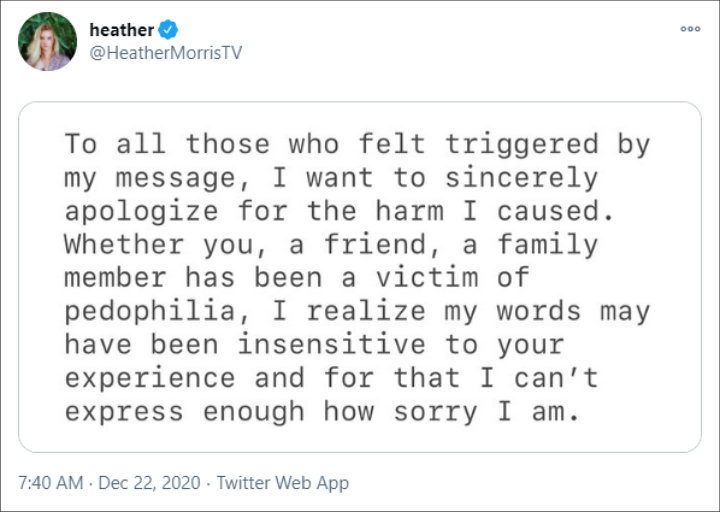 Fans showed their support for Heather as one said, "He made horrible decisions, but you still lost a friend. You're allowed to grieve." Another person added, "the fact heather even has to apologize. it's her opinion and how she felt about people who she was personally close with."

Prior to this, the 33-year-old called out a Twiiter user who covered Mark's face with a vomiting-face emoji. "I don't feel the need to ever justify something because somethings are better left unsaid. Y'all who have lots of things to say, I get it, I UNDERSTAND you...somethings are unforgivable. But this holiday season, amongst ALL holiday seasons is INCREDIBLE hard for so many of us," she wrote on December 18.

Heather went on to say, "We did not loose just 2 cast members, we lost 3," referring to Cory Monteith's and Naya Rivera's deaths in addition to Mark's. "And it is SO incredible tough to have to act like that 3rd one is invisible, because even though his actions are unjustifiable, he was a part of our family at one point and he was mentally SICK."

Further defending Mark, the TV personality added, "Yes pedophelia is a sickness but...." Later in the third and last tweet, Heather sarcastically noted, "Although I don't want to have to say all that, its truthful. So THANK YOU for treated me with such disrespect and unkindness during a time that I can't get through a day without balling my eyes out at the loss of my entire 'Glee' family... thank you."

Mark died in a suicide by hanging in January 2018, weeks before he got sentenced following his guilty plea to possession of child pornography.

Chrissy Teigen on Insecurities About Her Boobs: 'I Don't Give a F**k'

Trump Clowned for Allegedly Wanting an Airport Named After Him