The former 'Glee' star sarcastically thanks critics for treating her 'with such disrespect and unkindness' in response to backlash over her disdain of the vomiting-face emoji that covered her late co-star's face.

AceShowbiz - Heather Morris is standing by her decision to call out "offensive" post about Mark Salling. Finding herself being criticized for slamming a fan's tweet in which her late co-star's face was covered with a vomiting-face emoji, the actress famous as Brittany on "Glee" stressed that "somethings are better left unsaid."

On Friday, December 18, the 33-year-old took to Twitter to offer her clapback at the backlash. "I don't feel the need to ever justify something because somethings are better left unsaid. Y'all who have lots of things to say, I get it, I UNDERSTAND you...somethings are unforgivable. But this holiday season, amongst ALL holiday seasons is INCREDIBLE hard for so many of us," she first tweeted.

"We did not loose just 2 cast members, we lost 3. And it is SO incredible tough to have to act like that 3rd one is invisible, because even though his actions are unjustifiable, he was a part of our family at one point and he was mentally SICK," the TV personality continued in another tweet. "Yes pedophelia is a sickness but..."

In the third and last one, Heather pointed out, "Although I don't want to have to say all that, its truthful." She went on to sarcastically thank her critics, "So THANK YOU for treated me with such disrespect and unkindness during a time that I can't get through a day without balling my eyes out at the loss of my entire 'Glee' family... thank you." 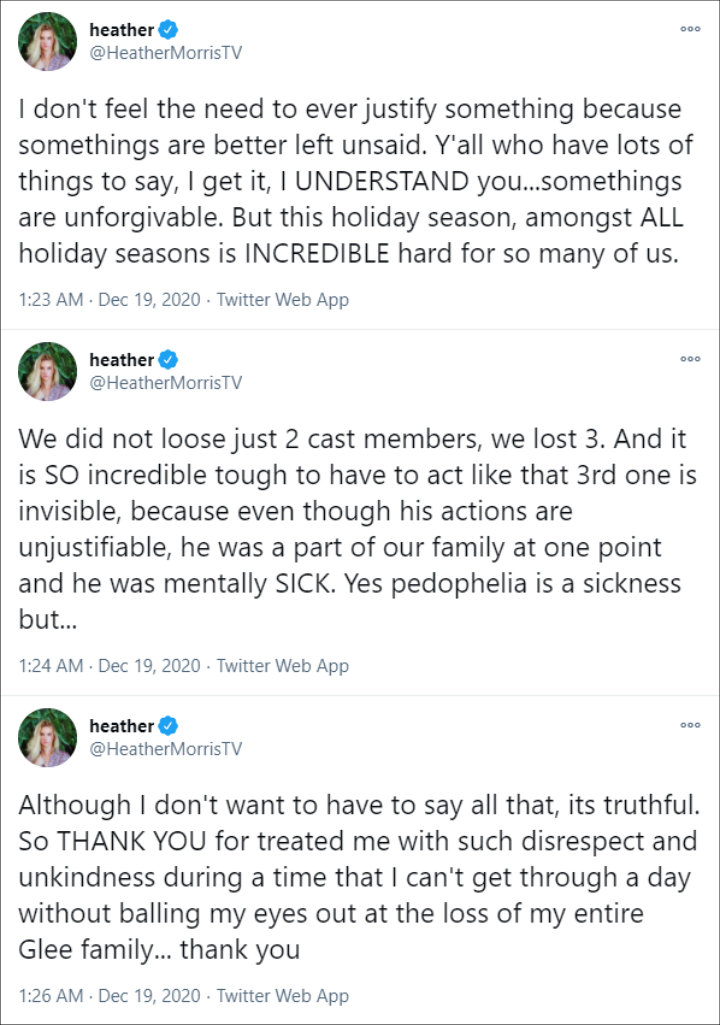 Heather Morris fired back at criticism after calling out 'offensive' post about Mark Salling.

One day earlier, Heather reacted to a fan's post about the series' "A Very Glee Christmas" episode that her former co-star Kevin McHale retweeted. In one of the photos attached, it could be seen Mark's face was covered with a vomiting-face emoji. While Kevin simply wrote, "This album goes hard tho," Heather found it disrespectful and replied, "the vomit face on Marks face is offensive." 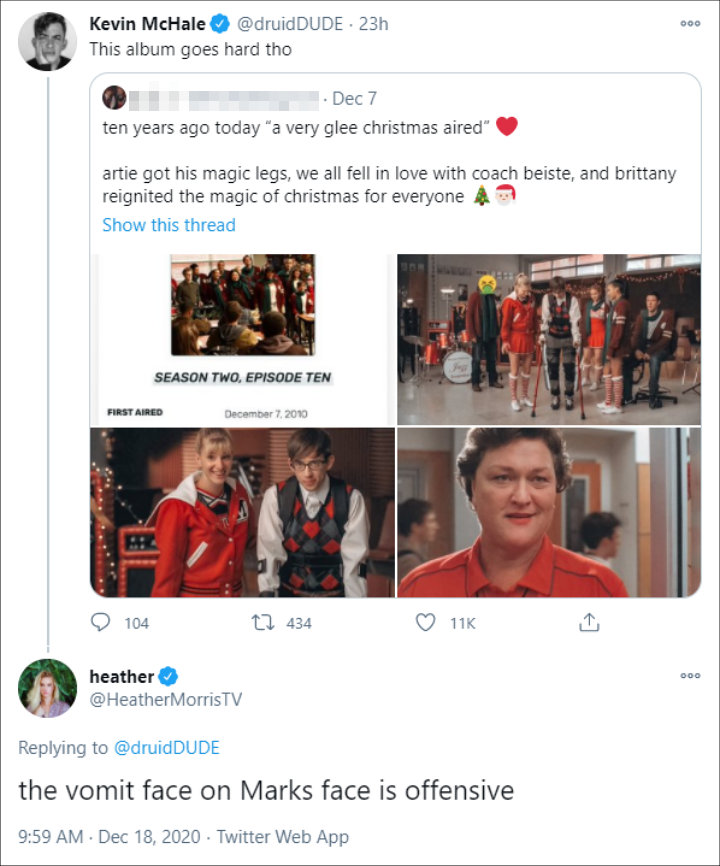 Mark committed suicide by hanging back in January 2018. He died weeks before he got sentenced following his guilty plea to possession of child pornography. His death came five years after Cory Monteith died from an overdose of heroin and alcohol. Most recently, their former co-star Naya Rivera passed away in an accidental drowning on California's Lake Piru.