Blake Shelton Gushes Over 'Fiancee' Gwen Stefani on 'The Voice'

Meanwhile, Blake's No Doubt singer fiancee proudly flaunts her new engagement ring in the new episode of the NBC show, on which both of them serve as coaches.

AceShowbiz - Blake Shelton can't get over his excitement of being engaged to Gwen Stefani. Over a month after going public with their engagement, the longtime coach of "The Voice" gushes over the No Doubt frontwoman as he and his fellow mentors made their return to the red chairs.

The 44-year-old country crooner was caught on camera making the declaration in the first live show of season 19 which aired on Monday, November 30. While joking around with three contestants who just completed their performances, he proudly exclaimed, "Not to be weird…my fiancee's out there!" 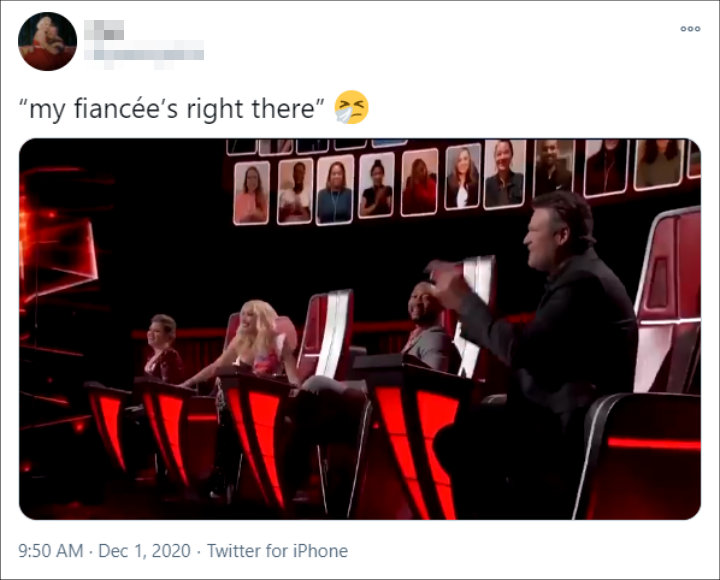 Blake Shelton gushed over Gwen Stefani on 'The Voice'.

Blake's statement was quick to receive positive comments from many Twitter users. One raved, "@blakeshelton, i love hearing you say 'my FIANCEE'." Another happily stated, "he loves saying that and it's so cute." A third quipped, "Blake using literally an excuse to tease America that he has Gwen Stefani as his fiance."

Blake's bride-to-be, Gwen, was seated just two chairs away from the "Happy Anywhere" singer during the show, and did not hide her smile upon hearing his term of endearment. For her appearance, she wore a colorful top with her massive engagement ring on full display.

Days prior, Gwen congratulated Blake for his Favorite Country Album win at the 2020 American Music Awards. Sharing a photo of her fiance on Instagram, she praised, "wow @blakeshelton u r sooooo loved! congrats on your greatness once again! gx."

Blake and Gwen announced their engagement in late October. Breaking the news was the mother of three when she shared an Instagram picture of her kissing the country singer while flaunting the sparkle. He reposted the snap, but wrote a different message that read, "Hey @gwenstefani thanks for saving my 2020... And the rest of my life... I love you. I heard a YES!"

This marriage to Gwen will be Blake's third. He was previously married to Kaynette Williams. He also wed fellow country singer Miranda Lambert in 2011 before calling it quits in 2015. Gwen, meanwhile, was married to Bush frontman Gavin Rossdale until 2015 when she filed for a divorce.