Confirming her split from the Uncharted Supply Company CEO, the former 'The Real Housewives of Orange County' star says she and Christian 'decided to part ways in the most loving' way.

AceShowbiz - Meghan King Edmonds' ex Christian Schauft has broken his silence after news of their split surfaced on Monday, November 30. Calling it quits with the former reality TV star after six months of dating, the 40-year-old was said ending things with her because he couldn't take the attention that came with their relationship.

"He couldn't take all the social media and public attention," a source told E! News about the end of Meghan and Christian's short romance. "He ended it shortly after her COVID diagnosis and all the attention that went with it."

However, Christian has denied that public attention took its toll on his relationship with Meghan. Calling the news "pretty inaccurate," he told Page Six, "I've never had any problem with any form of publicity. We lead very different lives and knew that when we met. Sometimes this happens. I wish nothing but the best for Meghan and the kids and we're on good terms."

Meghan also showed a similar tune when confirming her split from Christian on her Instagram Stories. She wrote that she and Christian "decided to part ways in the most loving and healthy way." She shared, "We just got off the phone laughing at how to 'announce' this and he suggested some cute, sappy breakup quote. I agreed so here ya go!"

The quote, which she also posted on her feed, read, "You're so hard on yourself. Take a moment. Sit back. Marvel at your life: at the grief that softened you, at the heartache that wisened you, at the suffering that strengthened you. Despite everything, you still grow. Be proud of this." 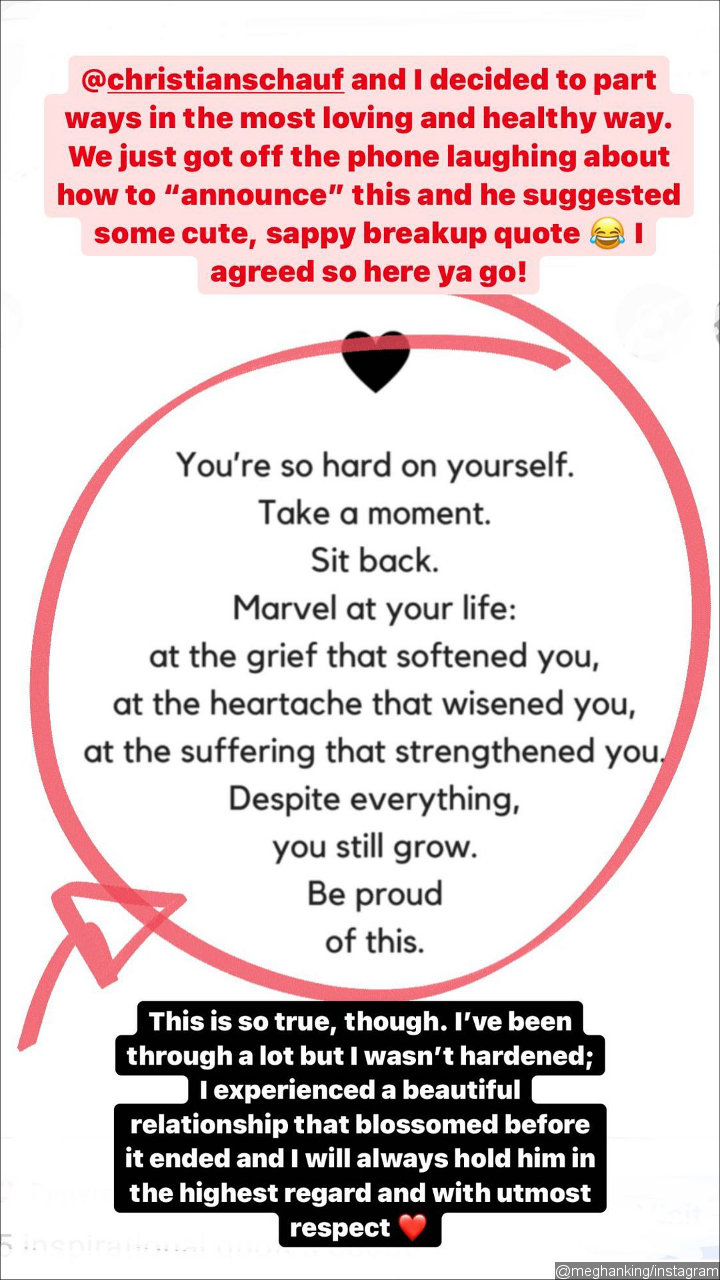 Meghan wrote along with the quote, "I experienced a beautiful relationship that blossomed before it ended and I will always hold him in the highest regard and with the utmost respect." She added in the caption of her post, "As I close the door on my relationship with Christian I am quite literally opening the door to our new family home. (God/Spirit/The Universe has a way of doing funny things like that.) Our relationship deserves to be honored even as it ends."

Meghan confirmed she was dating Christian, who hosts the "Life Uncharted" podcast, in May. Fans began speculating about possible trouble in paradise between the couple after "The Real Housewives of Orange County" alum didn't mention the Uncharted Supply Company CEO among the occupants of her house while giving a tour of her home on Instagram Live.

Blake Shelton Gushes Over 'Fiancee' Gwen Stefani on 'The Voice'