The 'Power' actor/executive producer is among those who give their two cents on the 'Sucker for Pain' spitter and the model's romantic relationship, which reportedly ends due to the pair's political differences.

AceShowbiz - Lil Wayne and Denise Bidot's relationship has been the talk of the town after it was reported that the pair went separate ways because they support different presidential candidates. 50 Cent was among those who gave their two cents on the "Sucker for Pain" spitter and the model's romantic relationship.

Fiddy was seen responding to TMZ's tweet on November 3 which read, "Lil Wayne's Girlfriend Dumps Him, Reportedly Over Trump Endorsement." Seemingly thinking it was the other way around, the "In Da Club" spitter corrected, "dumped, you can't dump little wayne."

He went on saying, "Now you can leave, if you going than go but somebody's waiting for the job. LOL." 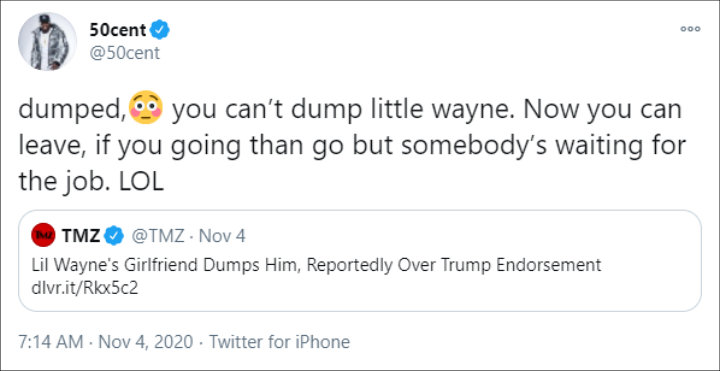 The post angered some of internet users as the "Power" actor appeared to not value women that much. "So you're saying that women don't mean much to you, if one can replace the one you're with currently, then she as a person doesn't have much impact of value? So a woman is a woman is a woman? And if that's projection, then you are? Am I understanding this right," one fan questioned. Someone else added, "They [sic] hell she can't!! That's irreconcilable differences and they’re not even married!! Good for her!!"

However, it seemed like Fiddy was right. Before deactivating her Instagram account, Denise, who endorses Joe Biden, wrote on Instagram Stories, "Imagine being dumped over an IG post…that expressed MY political view and encouraged people to vote." She also denied dumping Weezy, saying, "This is absolutely false."

As for Lil Wayne, he appeared to confirm reports saying that the political differences led to their breakup in a cryptic tweet. "I live the way I love and love the way I live. I'm a lover not a lighter bekuz they burn out. I am an eternal fire and burning love, either leave with a tan, a 3rd degree burn, or stay and die in love. You're sweating. Sincerely, the fireman," so he wrote.

Weezy was dragged online after publicly showing support for Donald Trump by sharing a picture from his meeting with the MAGA leader. "Just had a great meeting with @realdonaldtrump @potus. Besides what he's done so far with criminal reform, the platinum plan is going to give the community real ownership. He listened to what we had to say today and assured he will and can get it done," he praised the current president.

50 Cent Sues MedSpa for Implying He Had Penis Enhancement Surgery