In the caption of the post, the Grammy-winning singer gushes over 'The Simple Life' alum by calling her the 'epitome of self preservation, self love and absolute savagery.'

AceShowbiz - Adele has a unique way to belatedly celebrate the birthday of her pal Nicole Richie. Less than a week after "The Simple Life" alum turned 39 years old, the "Chasing Pavement" hitmaker paid tribute to her TV personality friend in commemoration of the milestone by making public a hilarious video of her getting scared by the latter.

On Saturday, September 26, the 32-year-old took to Instagram to let out one video and a number of throwback pictures capturing their fun moments together. The clip, in particular, documented the time she walked into the kitchen only to find herself screaming in surprise when her designer friend jumped up from the kitchen floor behind a wall.

"Happy belated birthday to my daily dose of grace @nicolerichie," the multiple Grammy Award winner wrote alongside the post. "I admire you and love you so much. You are the epitome of self preservation, self love and absolute savagery! You are so so cherished by so many angel girl! Keep making us laugh babes, we adore you to the moon and back. I'm actually furious that now she knows that."

Adele's birthday tribute has apparently caught Nicole's attention. The latter poked fun at the singer's reaction in the footage by writing in the comment section, "For f***s sake." The daughter of Lionel Richie was not the only one amused by the post. A fan raved, "Wow this friendship just made my year better," while another gushed, "It's all about love." 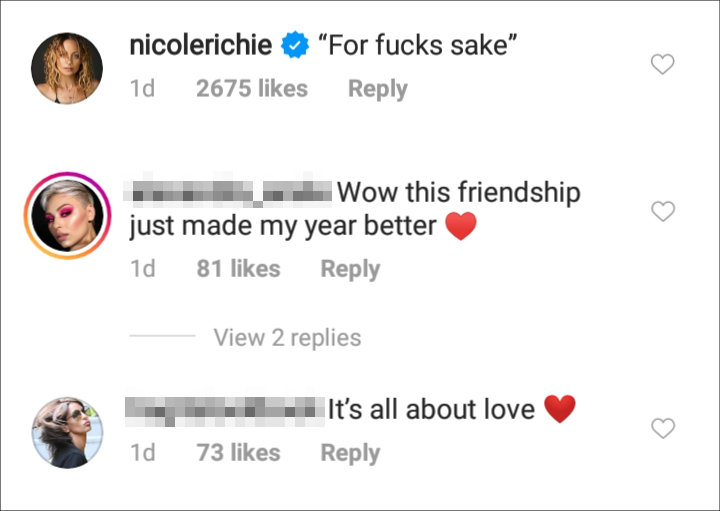 Adele received comments from Nichole Richie and fans on the birthday tribute post.

Adele became friends with Nichole when she lived in California with her ex-husband, Simon Konecki, and their young son, Angelo. Though the "Rolling in the Deep" hitmaker has now returned to the United Kingdom, their bond seemed to remain strong.

Friendship aside, Adele was spotted going on a date with rumored boyfriend rapper Skepta in East London on Friday night. "Adele looked great and they seemed happy being out together in the public view," a so-called eyewitness informed Metro about the outing.

"They were in the middle of the bar having their drinks while they were getting ready for the VR experience," the source added. "I think they must have played the zombie game because they were shouting and screaming."

Adele Gets Mistaken for Katy Perry in New Photo