The rock band has slapped the 'Ghostbusters' star with a legal letter for the use of their track 'Listen to the Music' in a commercial for his William Murray line of Zero Hucks Given shirts.

AceShowbiz - Lawyers representing Bill Murray's golf apparel company sent a humorous response to the Doobie Brothers after the band hit out at him for using their music to sell his "ugly" golf shirts.

The "Ghostbusters" star used the band's track "Listen to the Music" in a commercial for his William Murray line of golf clothing's Zero Hucks Given shirts - prompting a legal letter from the band's attorney Peter T. Paterno.

While Paterno insisted Murray "can't use music in ads without paying for it" and quipped, "We'd almost be OK with it if the shirts weren't so damn ugly," the actor fired back with a similarly tongue-in-cheek response.

"First, I would like to compliment you on finding levity in the law at a time when the world and this country certainly could use a laugh. Your client's demand was able to cut through the noise of the news cycle and remind us how much we all miss live music these days," attorney Alexander Yoffe, of law firm Yoffe & Cooper, wrote.

"We would also like to confirm that both our firm, and the good folks at William Murray Golf, are indeed fans of the Doobie Brothers' music, which is why we appreciate your firm's choice of 'Takin' It to the Streets', rather than to the courts, which are already overburdened Minute by Minute with real problems."

The lawyer then noted that an attorney at the law firm representing the Doobie Brothers also represented Robin Thicke during that singer's "Blurred Lines" battle against the Marvin Gaye estate, and added that the Doobie Brothers were not "harmed" by the golf company commercials. 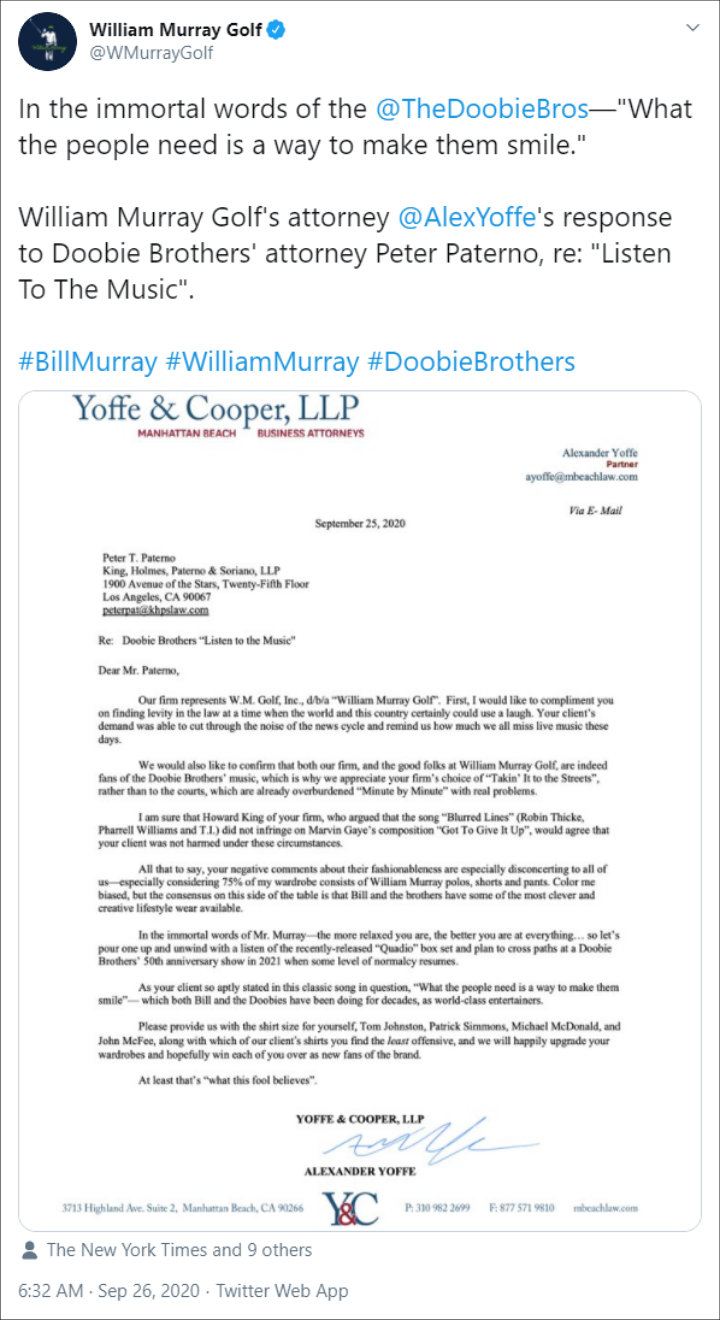 "As your client so aptly stated in this classic song in question, 'What the people need is a way to make them smile' - which both Bill and the Doobies have been doing for decades, as world-class entertainers."

Yoffe closed out his response by offering to send William Murray Golf shirts to each member of their band "and hopefully win each of you over as new fans of the brand... At least that's 'what this fool believes'."

Bill Murray to Reunite With 'Ghostbusters' Co-Stars for Charity