Amy Schumer Feels 'Good' Despite Her Battle With Lyme Disease

Sharing her positive outlook on the diagnosis, the 'Trainwreck' star jokes that she has 'maybe had it for years' and asks fans for treatment recommendations.

AceShowbiz - Amy Schumer is keeping a positive attitude toward her latest health issues. On the same day she went public about her Lyme disease diagnosis, the "Trainwreck" star assured her fans and social media followers that she felt "good" despite her battle with the tick-borne illness.

The 39-year-old comedienne opened up about her medical condition via Instagram on Tuesday, September 8. Sharing a throwback picture from her childhood, she began by stating, "my first ever fishing pole. Anyone get LYME this summer? I got it and I'm on doxycycline." She additionally pointed out, "I also want to say that I feel good and am excited to get rid of it."

Keeping a positive outlook on the diagnosis, the "I Feel Pretty" actress lightheartedly noted that she "maybe had it for years." She went on to ask for treatment recommendations. "Any advice? Can you have a glass of wine or 2 on it? I know to stay out of the sun. I'm also taking these herbs from cape cod called lyme-2," she wrote. "Please comment or text me on my number in my bio."

While Amy asked for some tips from those who are dealing with the same issues, many recommended her to better see a doctor. One replied, "Maybe ask your doctor? I would resist taking medical advice from randos on Instagram." Another pointed out, "Lyme can become a serious, long term autoimmune problem that is hard to treat. Please talk to a functional medicine doctor or naturopathic doctor ASAP, if you haven't already. Be well." A third similarly suggested, "Been there! My advice, see an infectious disease dr as well as a Lyme specialist." 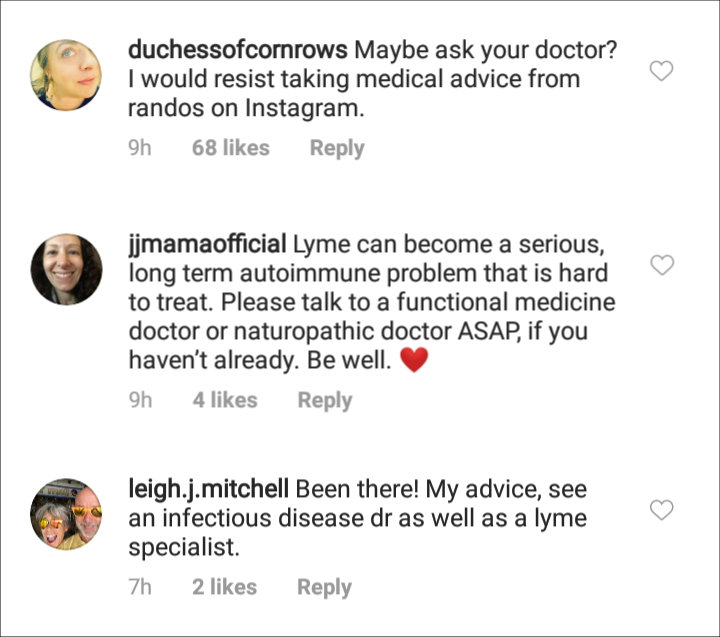 Amy Schumer's fans recommended her to better see a doctor.

Caused by bacterium Borrelia burgdorferi, Lyme disease is transmitted through the bite of an infected black-legged tick. While its symptoms vary, the early stage usually includes rashes along with fever, chills, fatigue, body aches, headache and neck stiffness. If untreated, new symptoms which include joint pain and neurological problems might appear.

Amy is the latest celebrity who has come forward about this disease. Months earlier, Justin Bieber confirmed rumors about his battle with the illness. The two of them joined a list of famous stars which include Avril Lavigne, Shania Twain, Kelly Osbourne as well as mother-daughter duo Yolanda Hadid and Bella Hadid.

Amy Schumer Left Shocked by Husband's Birthday Cake for Her

Amy Schumer: Chris Fischer Is Husband and Father Beyond My Wildest Dreams

Amy Schumer's Sex Life Dies Up After She Becomes Mother

Amy Schumer Still Hopeful to Have Another Baby Despite Quitting IVF