Following his controversial tweet, which lands him in hot water, the 'America's Got Talent' host claims on Twitter that while the tweet is 'ill-timed,' it is not 'illintentioned.'

AceShowbiz - Terry Crews has addressed criticism he received after he called for a boycott of Magic City, Atlanta's popular strip club. On Friday, August 28, the "America's Got Talent" host said that while he admitted that his controversial tweet was "ill-timed," it wasn't "illintentioned."

He went on writing on the blue bird app, "I pray for the many women trapped and trafficked in the life of the sex industry and see no way out. I want them to know they are not product to be used, but People to be loved." 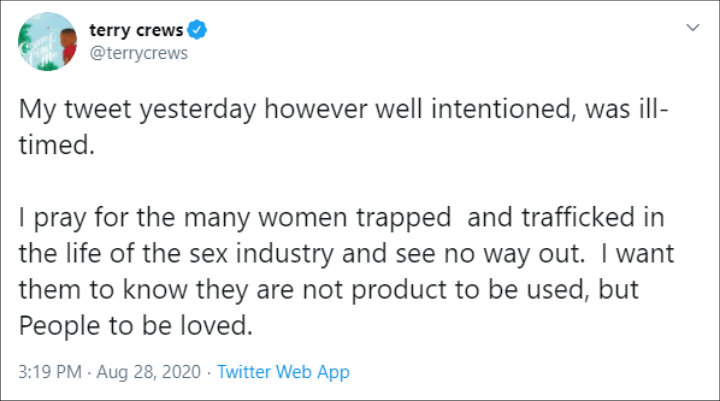 In another tweet, which has been deleted, he sent well wishes for Jacob Blake, who was shot several times by a police officer. "I also pray for the swift recovery of Jacob Blake, and can find no justification for shooting a man 7 times in the back in front of his children," Terry said. "The trauma of witnessing what happened to their father is devastating, and I want justice for the him and his family."

Terry previously heated up social media with his tweet as he called for boycott of Magic City, a popular strip club in Atlanta. Among those who reacted to his tweet was Bow Wow, who tweeted back to Terry, "Aye bruh u been on some flu a** s**t lately. Leave ATL out yo mouth! Magic is a staple here and it aint going no where. Just keep doing the robot and save yo self the public embarrassment."

Fellow rapper J.I.D also commented, "All this s**t goin on and this n***a talking bout boycotting Black women making money, Id fade yo big white washed a**." He, however, quickly backtracked on his public criticism against the actor as he regretted his action.

"I gotta take a step back & apologize for speaking hate on dis app cuz that not what we need right now," so the "Off Deez" rapper wrote on Thursday, August 27 on Twitter. "But ima double down and let y'all know I'd still sock bruh and whatever happens happens. putting my phone down now, love to all my people, everyone be safe and stick together."