While she doesn't expect much from 'f***ing loser wimp' Donald Trump, the 'Lip Sync Battle' co-host is disappointed that the First Lady is not doing her best to contribute amid the pandemic.

AceShowbiz - Chrissy Teigen has called out Melania Trump for her minimal contribution amid the coronavirus outbreak. The model launched an expletive-laden rant on Twitter against Donald Trump's wife to express her dismay at the FLOTUS, accusing her of not doing much to help Americans battle the virus.

"Has melania even thought about doing something with her be best s**t during these times?" the mother of two questioned Melania's effort amid the crisis. "I see regular a** awesome people on my timeline all day doing all they can to make people happy and this wifebot is working on whatever the f**k a tennis gazebo is."

Suggesting that what Melania cared about was only the White House decoration, the 34-year-old model added, "ALL I have seen this bot do is gently touch Christmas ornaments in a cape and stare in a cape and pat statues in a different cape and then change her cape into a rude a** jacket. F**k you." 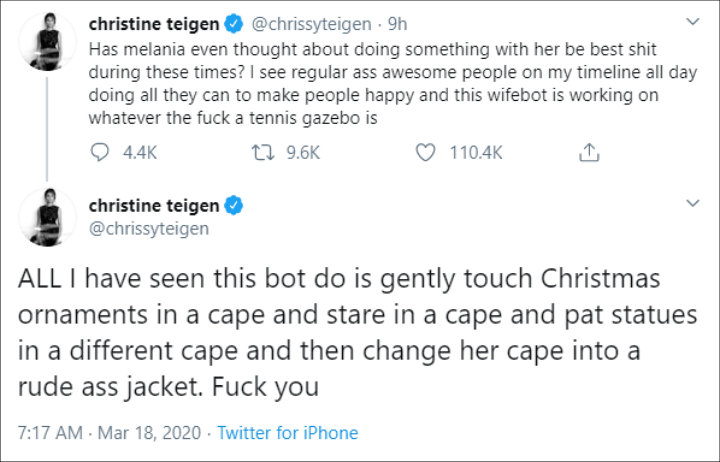 Never a fan of President Trump, Chrissy let everyone know that she expected "Donald to be a do nothing f***ing loser wimp," but she was disappointed because Melania "could maybe possibly try to uhhh BE BETTER possibly the best be the best the best be best."

Chrissy's last tweet was referring to Melania's "Be Best" slogan. Responding to her critics, the First Lady tweeted earlier this month, "I encourage everyone who chooses to be negative & question my work at the @WhiteHouse to take time and contribute something good & productive in their own communities. #BeBest."

Chrissy's criticism against Melania comes after she herself drew public's ire with her tweets about ordering soup amid the COVID-19 pandemic. "This is not an ad but if you're holed up at home, ordering America's best food from Goldbelly is the way to go right now!" she wrote in a now-deleted post on Sunday, March 15. "Currently shipping clam chowder from Boston to myself."

She added in another post, which has also been deleted, "If you've ever eaten somewhere and dreamed of having that certain bite again, chances are they have it available for delivery to your mouth and it’s so fun to scroll through."

Many deemed her social media posts were insensitive in addition to being ill-timed as local governments across the country urged restaurants and bars to close in an effort to limit the spread of Coronavirus, though many cities are still allowing people to order in from local eateries during certain times.

Defending her tweets, the wife of John Legend responded, "it IS just soup. I can't make everyone happy, I've really tried. why am I not allowed to make a boring, earnest tweet about something I enjoy that some others can too?" She went on to insist that "I have no ill intentions and I dunno why people want to think I mean harm with everything I say. I really wish I could make everyone happy, I do."