The host of 'The Kelly Clarkson Show' takes to Twitter to retweet the 59-year-old actress' post that talks about body positivity in order to slam a troll criticizing her for being 'chubby'.

AceShowbiz - Kelly Clarkson and Valerie Bertinelli have joined forces against a body-shaming troll. Hours after the former "Hot in Cleveland" star reacted to a hater who criticized her for being "chubby", the first winner of "American Idol" reinforced the actress' kind response with her own message of self-empowerment.

Applauding Valerie's reply to the body-shamer, Kelly tweeted her wisdom on Monday, February 17. "True power is recognizing the projection of others negativity & punching it square n the face w/all the positive, remarkable, intelligent, beautiful light that seeps from ur pores," she wrote. "Pity people that speak ill of others because while some of us r dancing, the others r too afraid." 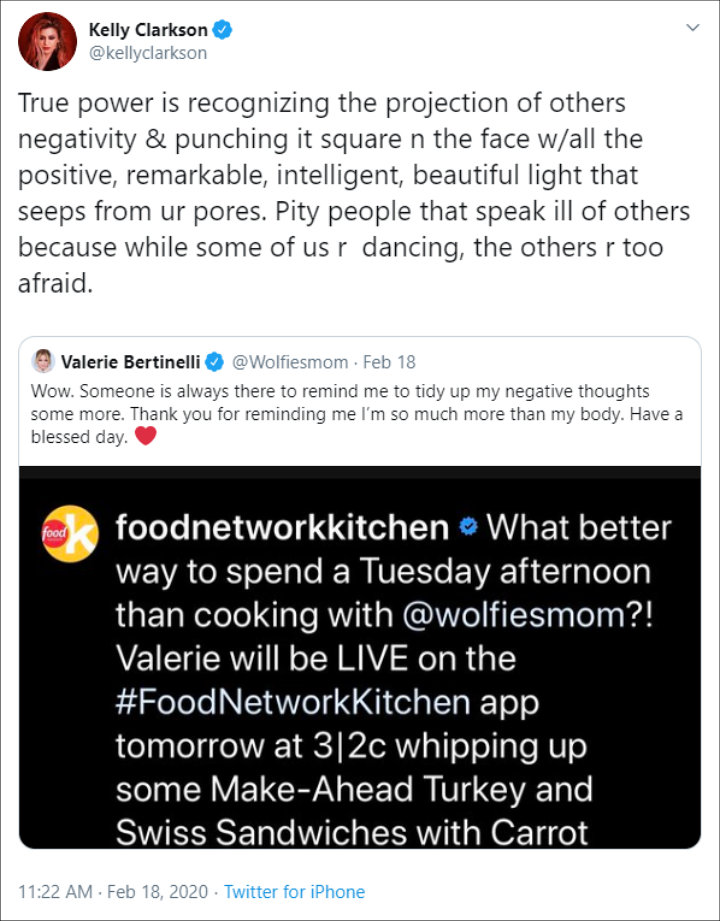 Kelly's support for Valerie came after the Food Network Kitchen announced on Instagram that Valerie would be making a live appearance as a guest cook on their app on Tuesday, February 18. One Internet user, however, made use the announcement as an opportunity to send an unwarranted criticism, writing, "Awwww, so chubby."

Noticing the negativity, the "Valerie's Home Cooking" host clapped back at the hater on Twitter. Posting a screenshot of the comment, she weighed in, "Wow. Someone is always there to remind me to tidy up my negative thoughts some more. Thank you for reminding me I'm so much more than my body. Have a blessed day." 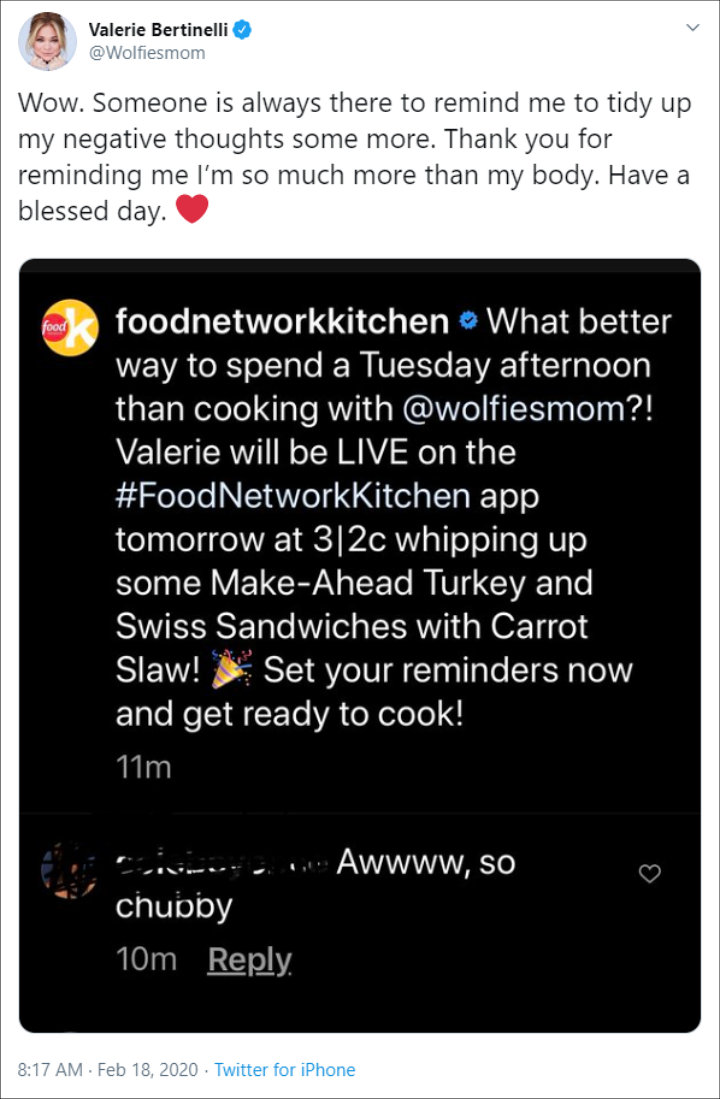 Valerie clapped back at a troll criticizing her body.

Kelly and Valerie's positive retorts gained approvals from other users. One replied under Kelly's post, "Wow. There are no words for the audacity of some people. I love some Valerie Bertinelli and have spent my day off catching up on her amazing recipes on the @FoodNetwork." Another said, "Woman should be empowered not broken down. We are all beautiful in my opinion because GOD made us all special in some way."

Personally, Kelly has been dealing with trolls and fat-shamers for years. Back in 2017, the "Because of You" singer hit back at a Twitter user who called her fat in response to her Fourth of July tribute post. Instead of being angry, she coolly wrote back, "...and still f**king awesome."

On that same year, Valerie shared her struggles with self-love. Posting a photo of her 16-year-old self on Instagram, she admitted that the girl in the picture was "very uncomfortable growing into her womanly body." She added, "To this day, I am still working to feel comfortable in my ever changing body. But, I'm finally starting to realize, it is what's in my heart that matters most, no matter what that stupid number on the scale tells me."

Shannon Brown Hoping to Get Back With His 'Forever Valentine' Monica