Bella Thorne on Finding Nude Photo Hacker: It's 'Getting Closer'

The former Disney darling shares a screenshot of a text exchange with someone as they discuss the case, with the person claiming that the hacker 'is way more sophisticated than we thought .'

AceShowbiz - Bella Thorne will not let the hacker, who threatened to release her nude photos online, go away easily. The "Midnight Sun" actress took to Instagram Stories to share to her online devotees that it won't be long before she catches a hold of the hacker.

In the June 21 post, Bella shared a screenshot of a text exchange with someone as they discussed the case. "Rest assure [sic] my friend we are working on solving this to get you piece [sic] of mind!" the sender wrote to the 21-year-old. "Respecting your wishes to not solicit criminal charges; we've had to solicit expert assistance with making 100% sure we have I'd [sic] the correct person responsible for these insensitive invasion of your privacy."

The sender also added, "This person is way more sophisticated than we thought or not your run of the mill hacker!" Captioning the picture, Bella wrote, "Getting closer to finding this guy." 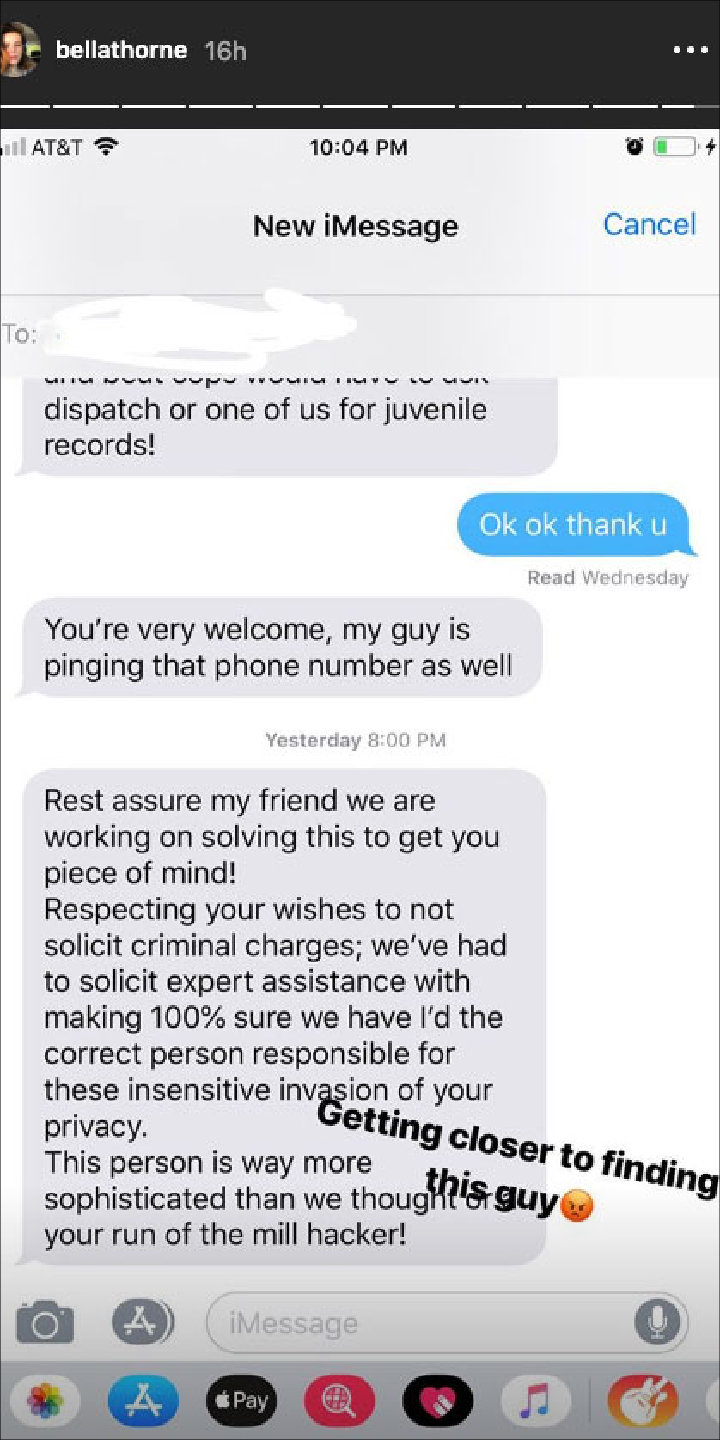 Bella Thorne shared that she's getting closer to finding the hacker who threatened her.

Previously, Bella shared a slew of her own nude photos on Twitter after getting threats from the hacker. Her action, however, was criticized by "The View" co-host Whoopi Goldberg. She later posted a tearful video of her responding to the backlash.

Several celebrities, however, came in Bella's defense. "Spider-Man: Far From Home" star Zendaya Coleman wrote to Bella in her text, "Just a reminder that you are strong and courageous and beautiful inside and out. You f***ing broke my heart with that damn ig post but anyway, just being a f***ing sap right now lmao just letting you know you're a light and I'm super proud. Love you."

It seems like Bella had bounced back after the scandal. The former Disney darling was spotted hopping on a yacht to party in Miami. In some photos obtained by TMZ, the "Famous in Love" alum donned a black sheer outer and matching leather shorts. Another picture saw her taking a selfie.

BET Awards 2019: Beyonce and Cardi B Among Winner List

Artist of the Week: Chris Brown