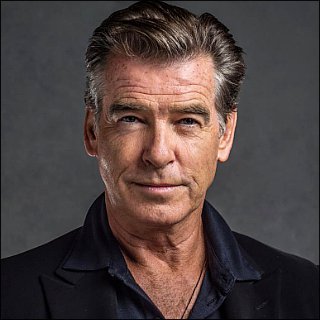 Recognized for his versatility to portray different characters in various film genres aside from his famous role as British agent James Bond, Pierce Brendan Brosnan is certainly deserved to be named as one of the most accomplished Irish actors in Hollywood film industry, or maybe even the world. Born as the only son of Thomas and May Brosnan on May 16, 1953 in Navan, Co. Meath, Ireland, little Pierce had been forced to face some bitter experience during his early life which was started from the departure of his father from the family when he was barely one year old. At the age of 4, his mother also left him to work as a nurse in London, therefore made the kid had to undergo a nomadic life, moving frequently from one place to another to live under the nurture of assorted relatives and friends. It was not until the year 1964 that he finally could rejoin May who then took the 11-years-old boy to settle in Putney together with her new husband, a Scottish World War II veteran named William Carmichael.

Not only served as a great fatherly figure to Pierce, Carmichael was also the one who first introduced him to the excitement of cinematic experience when they went to watch "Goldfinger" (1964) which triggered the dark-haired teen to grow an interest in acting. Gave up his study at London's Elliott School at the age of 16 to learn more about performing, he spent the next several years to take some workshops in experimental groups of Oval House Theatre Club and The Living Theatre before enrolled in London's Drama Center by 1973. Acquired both proper training and fine education there for a couple of years, he confidently embarked on his journey to pursue an acting career, quickly landed a part in a stage production of "Wait Until Dark." It was then followed by a more noteworthy role in the British premiere of Tennessee Williams' "Red Devil Battery Sign" which led him to delightfully encounter his screen debut in BBC's TV movie, "Murphy's Stroke" (1979).

As the feature surprisingly came to the attention of American producers from ABC TV network, Pierce was immediately billed to be the male lead in their acclaimed miniseries, "The Manions Of America" (1981) opposite Kate Mulgrew. This undoubtedly brought him sufficient access to pave his way in American film industry as he was selected to play the title character in NBC's "Remington Steele" by the following year, prompting him to settle in Los Angeles eventually. His bold decision did not result in vain indeed for the series became a huge hit across the country, consequently directed him to acquire vast attention from the public along with growing popularity and wealth. It became greater when he wonderfully scored a nomination at the Golden Globe Awards in 1985 for the category of Best Performance by an Actor in a Supporting Role in a Series, Mini-Series or Motion Picture Made for TV through his role in the 1982 British miniseries, "Nancy Astor."

His blooming status in U.S. apparently attracted EON Productions, a renowned British-based company, to consider him as the next 007 in its 15th installment of James Bond film series to replace Roger Moore who had asked for retirement in 1986. Since "Remington Steele" was about to come to its end at that time, Pierce enthusiastically accepted this lavish offer, but the wide exposure he received due to this agreement evoked NBC to revive the show for another year with the purpose to capitalize on this situation. Bound by the contract, he accordingly was obliged to keep joining the series until its last episode in 1987 and therefore lost the role to Timothy Dalton who then played this MI6 agent in "The Living Daylights" (1987), the Bond film he supposed to star in. Disappointed but not devastated, this slender actor thus moved on with various big and small screen productions, such as "The Fourth Protocol" (1987), NBC's miniseries of "Around the World in 80 Days" (1989), "Victim of Love" (1991), and "The Lawnmower Man" (1992).

By 1993, Pierce had already maintained quite a solid career in Hollywood, particularly after he appeared in Chris Columbus' drama comedy hit, "Mrs. Doubtfire" (1993) while also acted as special agent Michael 'Mike' Graham in two TV-movie adaptations of Alistair McLean's novels, "Death Train" (1993) and "Night Watch" (1995). To his surprise, he once again was contacted by EON Productions in 1994 to be offered the same part he had been considered for and since this tall guy was not stick to any deals, he quickly took the promising chance without further thought. His first Bond movie, "GoldenEye," finally came up in 1995 to become a worldwide box-office hit with the income of more than 353 million U.S. dollar, subsequently propelled Pierce to international recognition along with huge praise from the critics which lauded him as the best Bond after Sean Connery.

The great attainment of "GoldenEye" fortunately did not make him unaware of the possibility of being typecast as this British spy for he wisely kept polishing his acting skills with the allowance of EON Productions. Effectively made use the permission to explore diverse film genres, the charming actor eagerly took part in "The Mirror Has Two Faces" (1996) and "Dante's Peak" (1997) before once again portrayed James Bond in "Tomorrow Never Dies" (1997) alongside Teri Hatcher, Michelle Yeoh, plus Jonathan Pryce. This extended to the following years as he was also involved in several film projects while still reprised his role in the 19th and 20th installments of Bond movies, namely "The World Is Not Enough" (1999) and "Die Another Day" (2002). Among those pictures, the most notable was John McTiernan's "The Thomas Crown Affair" (1999) which fantastically garnered almost 70 million U.S. dollar during its run in domestic theaters.

Managed to evoke critical praise for his performance in "Evelyn" (2002) although this touching drama feature fared poorly in the box-office, Pierce was ready to film his next Bond movie, but it later turned out that "Die Another Day" was his last appearance as 007 when EON Productions ultimately decided to end their collaboration by August 2005. Already became a high-profile actor through his enactment in "Laws of Attraction" and "After the Sunset" which both came up in 2004, he confidently walked forward to join Greg Kinnear plus Hope Davis in "The Matador" (2005), delivering a brilliant portrayal of a hit man ironically named Julian Noble who faces a crossroads in his uneasy life. Next starred in "Seraphim Falls" (2007) alongside Liam Neeson and Anjelica Huston, this charismatic man kept taking a steady hold in Hollywood film industry as he afterwards showed up in "Shattered" (2007) and "Married Life" (2008) while reprising his role as Thomas Crown in "The Topkapi Affair", set to come up in 2008 as well.

Much to people's surprise, year 2008 also marked his foray into musical genre as he eagerly signed on to appear opposite Meryl Streep in "Mamma Mia!", a big screen adaptation of the popular ABBA musical created by Judy Craymer and Catherine Johnson. There would still be few others to hit theaters in the same year, though, like rom-com flick "Spy vs. Stu" and biopic "Caitlin" before moviegoers find him going dramatic in "The Big Biazarro" (2009).

Apart from being an actor, Pierce is also known as a film producer, a profession he has developed since 1996 through his own company, Irish DreamTime, which he formed along with Beau St. Clair, producing some films he also starred in, such as "The Nephew" (1998), "Evelyn" (2002), and "The Matador" (2005). Concerning his private life, he first was married to Australian actress Cassandra Harris, who later delivered their son Sean William on September 13, 1983, while also adopted her two children, Charlotte and Christopher Harris in 1986 upon the death of their biological father. Sadly, Cassandra passed away in 1991 at the age of 39 because of the ovarian cancer that she had battled against for 4 years, leaving a hollow in his heart for quite a long time before he finally met Keely Shaye Smith in Mexico. Found a new love in this former TV journalist, he decided to tie the knot with her on August 4, 2001 after she gave him two lovely sons named Dylan Thomas in 1997 and Paris Beckett four years later.