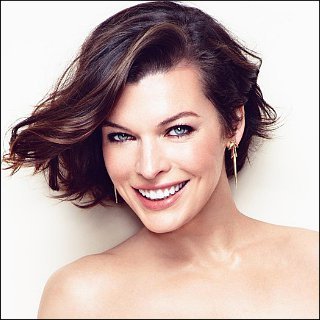 Wonderfully maintained her position as a popular movie star with wide range of roles, Milla Jovovich has really stood out among other fellow models-turned-actresses. A daughter of Serbian pediatrician and Ukrainian actress born Militza Jovovich on December 17, 1975 in Kiev, Ukraine, little Milla spent her early childhood traveling between two countries as her father, Bogdanovitch Jovovic, at that time was still conducting his medical studies in London, England while her mother, Galina Loginova remained in Russia. Sensed that his medical practice could not grow well in the Russian economy, Bogdanovitch thus decided to start a new life in Sacramento, California by the time his daughter turned 5, but in the end he finally took the family to settle in much bigger city of Los Angeles some months later.

Under her mother's encouragement, Milla then took an acting class as well as those of ballet and music throughout the rest of her childhood, but it was modeling that caught her first. At age eleven, she already got included in Revlon's Most Unforgettable Women in the World advertisements, thanks to photographer Richard Avedon, even was featured on the cover of the Italian fashion magazine, Lei, in October 1987. Afterwards underwent a career as a model, this striking brunette also began her venture in acting field, taking parts in "Two Moon Junction" (1988) and in an episode of TV series of "Married... with Children" (1987-1997) in 1989 plus "Parker Lewis Can't Lose" (1990-1993) a year later before earned a major role in "Return to the Blue Lagoon" (1991).

Her appearance in the latter picture inevitably led to comparisons between her and Brooke Shields, the older actress who previously starred in the original "Blue Lagoon", consequently brought her name to the surface. Managed to earn supporting parts in "Kuffs" (1992) along with "Dazed and Confused" (1993), her status grew higher when she was billed to play opposite Bruce Willis in Luc Besson's "The Fifth Element" (1997) as the sci-fi action flick satisfyingly became one of the box-office hits of that year after garnered almost 64 million dollar U.S. during its run in the domestic theater. Her next two film features, "He Got Game" (1998) and "The Messenger: The Story of Joan of Arc" (1999), also turned out to be commercial success although did not surpass what "Fifth Element" had attained.

Marked the beginning of the third millennium with an enactment in "The Million Dollar Hotel" (2000), Milla continued her acting career quite steadily, even once more encountered good result in the box-office through her 2002 feature "Resident Evil." The tough-girl image she was convincingly able to display subsequently led her to again be cast in the flick's sequel, "Resident Evil: Apocalypse" (2004) followed by another action turn in "Ultraviolet" (2006). The action stint continued in 2007 when audience once more found the star reprising her "Resident Evil" role in the franchise's third big screen installment "Resident Evil: Extinction" alongside Mike Epps and Oded Fehr.

Aside from her profession as an actress, Milla has also developed another career in music, starting from the release of her first effort, "The Divine Comedy", on April 5, 1994. A beautiful collection of eclectic music that utilized instruments from around the world, the album gained positive reviews from the critics, building up her confidence to keep singing as seen in the songs "Satellite of Love" from "The Million Dollar Hotel" soundtrack and "On the Hill" with her short-lived band Plastic Has Memory. Though so, she later preferred to go on writing songs only and submitted them in mp3 format on her official website for free downloads.

Concerning her love life, Milla first married to Shawn Andrews, her "Dazed and Confused" co-star, on October 2, 1992, but the marriage was quickly annulled by her mother due to her young age. Afterwards tied the knot with Luc Besson in 1997, she again encountered failure in her marriage life as the couple concluded to split two years later. She then engaged to "Resident Evil" director Paul W. S. Anderson and on November 3, 2007 gave birth to their first child together, a daughter named Ever Gabo Anderson.