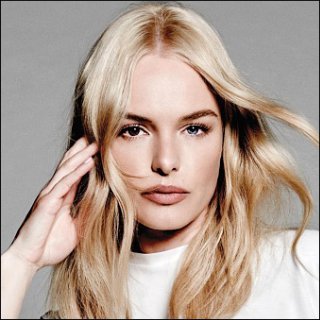 A fine example of the characteristic of a Hollywood young actress, Kate Bosworth, without doubt, possesses all the goods within her: talent, beauty, intelligence, humbleness, and the most important, a genuine love for acting. "It's my passion and I love going to work everyday," she admitted. "But there's a difference between that and between craving the spotlight. That's not what attracts me to this business, doing the red carpet stuff. It's involved and can be really fun but it's not something that I like to do on a night out." With this star quality, no wonder she quickly soared to acquire world's attention as well as praise and admiration from both critics and audiences.

Born as Catherine Anne Bosworth on January 2, 1983 in Los Angeles, California, Kate spent most of her early life going around different parts of U.S., like Connecticut and Massachusetts, with her parents. During this period, she not only began to grow a fondness for horseback riding, but also got interested in acting, as this only child in the family once said: "I think that my love for horses spurred my love for acting. What attracted me the most about being an actor was that you go through different layers of yourself," she added.

An equestrian champion who previously appeared in the stage production of "Annie" held by a local community theater, the 14-years-old girl later heard about an open casting call for a big screen production entitled "The Horse Whisperer" (1998). The fact that it focuses on horses prompted her to join the film's audition in New York besides the curiosity to experience what it was like to audition for a movie role. Surprisingly able to impress the casting directors, she finally encountered her first film debut in this drama feature as Judith, the best friend of Grace MacLean played by Scarlett Johansson.

Although her role in "The Horse Whisperer" was a small one, the film's success to become one of the box-office movies of that year led to other promising offers of either auditions or scripts. However, Kate wisely chose to finish her education at Cohasset High School while also explored various athletic endeavors for she did not consider being an actress as the main priority of her life at that time. It was not until the year of 2000 that she made her comeback through Warner Bros' short-lived TV series, "Young Americans," and a sports drama film, "Remember the Titans," alongside renowned actor Denzel Washington.

The spotlight started to direct its ray toward this blonde beauty by 2002 as she appeared in an exciting surfing movie entitled "Blue Crush." Previously assumed to be a brainless summer popcorn flick, it surprisingly amazed either critics or audiences with the MTV-style visuals of the Hawaiian surf scenes. Also displayed Kate's stunning performance as a strong-willed, determined, independent and aspiring surfer named Anne Marie Chadwick, the film became a sleeper hit of that year after it successfully garnered more than 40 million U.S. dollar during its run in the domestic cinemas.

The great result of "Blue Crush" unmistakably propelled Kate to wide recognition, leading her to obtain two nominations for Breakthrough Female and Best On-Screen Team categories at the 12th Annual MTV Movie Awards by the following year. As her career received quite a boost, she smoothly made her way to land more roles in some films, among others "The Rules of Attraction" (2002) opposite James Van Der Beek, "Advantage Hart" (2003) and "Wonderland" (2003) in which she received positive reviews from critics.

2004 saw Kate appeared with Topher Grace in a romantic comedy flick entitled "Win A Date With Tad Hamilton" before portraying Sandra Dee in Kevin Spacey's ambitious project, "Beyond the Sea." Cast alongside Richard Gere and Juliette Binoche in "Bee Season" (2005) which was based on Myla Goldberg's 2001 novel, she satisfyingly earned a female leading role as Lois Lane in Bryan Singer's "Superman Returns" (2006) while starred in a drama feature "Seasons of Dust" which has been slated to also come up in 2006. With these high-profile productions, this young starlet definitely has compiled a wonderful resume to enhance her status in Hollywood film industry.

Apart from her profession as an actress, Kate has been one of the models of Revlon cosmetics company besides Eva Mendes, Julianne Moore and Halle Berry. She is also known as the girlfriend of the widely popular actor, Orlando Bloom. The couple first met on the set of a Gap advertisement in 2002 and has since established a love relationship. Although they later separated by January 2005 with the reason of putting full concentration on their career, the bond between them apparently was too strong to be denied so that they decided to be together again in late August. Unfortunately, their on-again relationship could not stay for any longer as in September 2006 they decided to go separate ways, permanently, though still remain good friends and working partners as seen in "Seasons of Dust" (2007).

However, it apparently only took a short time for Kate to shed her grief over the break-up for in the same month she had already been spotted walking around Greenwich Village in New York City with British model James Rousseau. In the meantime, she eagerly took another dramatic role in "The Girl in the Park" (2007), the first directorial work of Pulitzer-winning playwright David Auburn.

Josh Gad: My Daughters Are No Longer Interested in Olaf