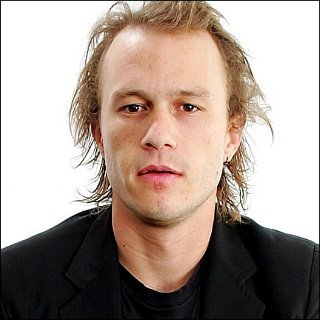 Gloriously emerged as a Hollywood's rising star in a relatively short time, Heath Ledger perhaps was the most cherished Australian actor of his generation. Previously considered to be a shallow actor, he had displayed such memorable performances to eventually gain people's acknowledgment of the great talent and intelligence he really possessed. A man of Irish and Scottish descent, he was born on April 4, 1979 at Subiaco Hospital in Perth, Australia with the name Heath Andrew Ledger to Kim and Sally Ledger. At the age of 10, his parents, however, decided to have divorce and each later remarried with someone else, giving him two more sisters, Ashleigh Bell and Olivia Ledger, aside from the older one, Kate.

Heath afterwards entered Perth's Guildford Grammar School in which he started to develop a fondness for acting as a result of his involvement in drama class. Polishing his skills in portraying characters at the companies of Guildford Theatre, Globe Shakespeare, and Midnight Youth Acting, he began to build an impressive resume of theatrical experience through his performances in, among others "Bugsy Malone," "Peter Pan," "Hamlet," and "Royal Hunt of the Sun." Intended to look for much larger acting opportunity, the 16-years-old boy then left his school a year earlier to head for Sydney with the companion of his long-time best friend, %cTrevor DiCarlo%.

The early period in Sydney was quite tough for him to undergo as he only obtained minor roles in "Blackrock" and "Paws" which both came up in 1997 while went with a notice through a short-lived TV series entitled "Sweat" (1996). His hope rose when he successfully landed the lead role in a U.S. small screen production of "Roar" (1997), but this optimism quickly vanished for the medieval series garnered poor ratings so that the network concluded to stop its airing. Despite the show's brief run, it delightfully managed to bring him into the attention of American audiences, particularly the younger one. Continued to join auditions in U.S., he again grabbed the major part in "Two Hands" (1999) which turned out to be an acclaimed Australian feature.

Heath's star started to glow when he was cast in Buena Vista's "10 Things I Hate About You" (1999) which led him to be nominated at the 2000 MTV Movie Awards in the category of Best Musical Performance. Subsequently showered with a lot of offers to star in many other teen movies, he firmly rejected them although it meant that he had to waste his time in finding a desirable part. "There's little depth in those scripts," he explained his refusal. "You can only take the psyche of a teenager to a certain level." Fortunately, his wait for the right role was worthy as he successfully defeated almost 200 other actors to star alongside %cMel Gibson% as Gabriel Martin in %cRoland Emmerich%'s excellent war drama movie, "The Patriot" (2000).

Not only praised by the critics, "The Patriot" also collected a tremendous income of more than 215 million U.S. dollar in the international market, directing Heath to encounter considerable popularity all over the world. Satisfyingly dropped his 'pretty boy' image through this work, he continued to explore various human characters, taking more intriguing roles in his next projects of "A Knight's Tale" (2001), "Monster's Ball" (2001), "The Four Feathers" (2002) and "Ned Kelly" (2003). By 2005, he had really become one of the most frequent actors to appear at the cinemas as four of his films were released in the year which included "Lords of Dogtown," "The Brothers Grimm," "Brokeback Mountain" and "Casanova."

Thanks to the critical and commercial success of "Brokeback", Heath finally could emerge as one of Hollywood's A-listers in the film industry. Not only scored a remarkable worldwide gross of over $178 million, the bittersweet drama also brought him some film award nominations, culminating in that of Best Performance by an Actor in a Leading Role at the 2006 Academy Awards. Following this, came two more challenging roles in "Candy" (2006) and "I'm Not There" (2007) before he satisfyingly secured down another prestigious part as Batman's nemesis the Joker in "The Dark Knight" (2008), the sequel to 2005's hit movie "Batman Begins."

Apart from his career in movie industry, Heath had been known as a ladies' man due to his romance with some actresses. Dated his co-star of "Roar," %cLiza Zane%, in 1997, he was later seen romancing %cHeather Graham%, who is almost nine years his senior, by the year 2000. However, their relationship only lasted less than two years for he then gave his heart to the "21 Grams" actress, %cNaomi Watts%. Undergoing an on-off affair since 2002, they sadly decided to go separately by 2004 in the end. Nevertheless, Heath quickly flourished a new love for %cMichelle Williams%, whom he first met on the set of "Brokeback Mountain."

The relationship between Heath and Michelle delightfully went to its next level when the couple got engaged not long after they began dating each other in June 2005. The twosome's happiness doubled as they later welcomed their first child, a daughter named Matilda Rose, on October 28, 2005. Despite the baby's arrival, the romance between them, on the other hand, gradually faded away, ultimately leading to their decision to break up in early September 2007.

Fate turned out to be indeed cruel on Heath's life few months after his separation from Michelle. On January 22, 2008 around 3:30 P.M. EST, the actor was shockingly discovered dead at his apartment in the SoHo neighborhood of New York City. His body was found lying naked with face down in his bedroom by a housekeeper and a masseuse, whom he had called for a message session. On a nearby night table, police called found sleeping pills, both prescription medication and nonprescription, yet stated that there were "no obvious signs" of suicide nor did they suspect foul play. Condolences soon began to flow heavily to his mourning family, notably from Australian Prime Minister Kevin Rudd, who said in a statement that "It is tragic that we have lost one of our nation's finest actors in the prime of his life."