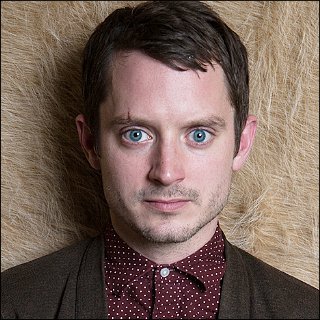 "Success is getting what you want. Happiness is liking what you get." Elijah Wood providently has either one as to why he could enjoy what he has fought and achieved during his entire acting career. A professional actor since the age of six, he's been addressed Hollywood's most gifted child actor of the 1990s. Best known for the role of Frodo Baggins in the Lord of the Rings movies, Elijah began his career as a model and moved on to commercials and TV-movies before starting a successful career in features. Prior to those, this handsome and dark-haired performer lived a very common and ordinary life 'till his acting career being noticed by the public shortly after he started school.

Nicknamed Elwood, he's born Elijah Jordan Wood on January 28, 1981 in Cedar Rapids, Iowa and is the middle of three children born to Warren and Debbie Wood, who run a deli in town. His brother Zack is a video game producer and seven years his senior, while his younger sister Hannah is a poet and actress. There he was in the chorus of "The Sound Of Music," the annual festival of his elementary school, held in 1987. The next year, he joined the audition for the lead role in “The Wizard Of Oz," another musical production at his school, which was part of the festival "Hooray for Hollywood." In time, he also was a choirboy in the Marion Creative Council's production called "See How They Run." The thought that Elwood could do some TV-related jobs as well suddenly crossed his mother's mind. Thus, she then enrolled him in a local modeling school, at Avant Studios, known as Avant Models & Talent, Cedar Rapids. It was half a year later that she took him to Los Angeles for an Annual International Modeling and Talent Association Convention, where Gary Scalzo, a talent manager, happened to be one of its judges.

Was just a model, little Elwood had no idea about the audition, but everything indeed began there when he, with his natural charm and charisma, could impress Gary who later offered him the chance to be an actor. "When my mom brought me to Hollywood for the convention, I didn't think of acting because I was just a model,” he recalled. “But when Gary asked me if I wanted to be an actor, I said, 'Yeah, sure. I'll be an actor.' Gary was one of the judges in the talent auditions and my mom said it was OK with her. He said, 'I believe in you' and asked my mom if we could move out." This was a very determining start for Elwood big hit in movie industry, thanks to her mom who saw him off at the contest.

A month later, the family moved to Los Angeles and this was just a good beginning that at the end made a good ending as from this point on the career of young Elwood had begun. Under the guidance of Mr. Scalzo, he successfully landed his first professional job, taking part in Paula Abdul's music video production "Forever Your Girl," as a result of six weeks auditions. It wasn't long at all that number of productions, which met him with senior professionals, followed. He first did small roles with the like of Michael J. Fox in Robert Zemeckie's production "Back To The Future II” (1989); and Richard Gere in "Internal Affairs" (1990). However, it was through the autobiographical family saga "Avalon" (1990) about immigrants to the United States, that he began to steal people's notice to himself. Critics started noticing his great and natural acting talent, as that became evident for Scalzo, "Elijah's personality is just right for the screen. When he walks in, the whole room lights up."

As time went by, Elwood kept exploring his acting skills, doing starring role in "Radio Flyer" (1992), a harrowing fantasy-tinged tale of child abuse. Then again by next year he backed to the stage, starred in Disney's adaptation of the Mark Twain classic "The Adventures of Huck Finn" (1993) and did small but important roles in TV, namely the Oscar-winning “Witness,” and “Showtime 30-Minute Movie,” wherein he played a little Jewish boy haunting a Nazi soldier who takes Jews to the gas chamber. Things got better in 1993 when he co-starred with another child star, Macaulay Culkin, playing a troubled son who recently lost his mother to illness in the psychological thriller “The Good Son” (1993). The year of 1995 witnessed Elwood's portrayal as an apparently perfect child who, feeling under appreciated by his distracted parents, becomes a free agent looking around the world for better parents in a hilarious comedy, Rob Reiner's “North.” The same year he also co-starred as Kevin Costner's son in “The War.” Backed to the big screen following his two-years absence, he starred in “Flipper” (1996) as a troubled teen, sent to live with his bohemian uncle, who befriends a dolphin. Kept exploring more challenging roles, Elwood got one as a troubled teen coming of age in the 70s in the fantastic ensemble film by Ang Lee, “The Ice Storm” (1997).

Handful offers to play older teen roles came as he grew older and possessed far more talent and experience than his other companions. Yet, instead of playing in the romantic comedies and horror flicks that were inundating theaters in the late 1990s, Elwood did appear on the big screen in more exploitative projects, played in "Deep Impact" and "The Faculty" which both came up in 1998. The following year he played in "Black and White" (2000) which showed off his more adult and versatile work than his previous. After that he joined the cast of the long-awaited three-part feature adaptation of J.R.R. Tolkien's "The Lord of the Rings," which he previously had heard while filming “The Faculty” (1998). Approvingly, what he sensed as the chance of a lifetime finally came true, he landed the role of Frodo Baggins. Success greeted him as he was set to play in “The Lord of the Rings: The Fellowship of the Ring” (2001). The film went success, earned $66.1M in the U.S. in its opening weekend, while also winning 4 Oscars all at once. Concerning that attainment, Elwood was set to reprise his role in the last two series of the trilogy; “The Lord of the Rings: The Two Towers” (2002) and “The Lord of the Rings: The Return of the King” (2003).

Just like its first, “The Lord of the Rings: The Two Towers” (2002) also was a hit, earned $62M in the US during its opening weekend and won 2 Oscars, while its last “The Lord of the Rings: The Return of the King” (2003) won 11 Oscars. Thus, “The Lord of the Rings” trilogy becomes Elwood's biggest projects to date, which reluctantly make him a star and help him to establish a bright future career. Though, he won't be shadowed by the image of Frodo Baggins, and so took decision to play unsympathetic roles, such as a stalker in “Eternal Sunshine of the Spotless Mind” (2004) and a serial killer in “Sin City” (2005). Besides all, his other films include “Chain Of Fools” (2000), “All I Want” (2003), and “Spy Kids 3-D: Game Over” (2003). By 2005, this charming actor has appeared in “Green Street Hooligans” and “MTV Presents: The Next Generation Xbox Revealed”, while also finishing “Everything Is Illuminated” before voicing the computer-animated musical comedy “Happy Feet” (2006) with Robin Williams and Brittany Murphy.

On the same day the latter title was released in theaters, Elwood delightfully also witnessed his other starring vehicle “Bobby” came up to then find himself, together with the flick's cast members, got nominated at the 2007 SAG Awards in Outstanding Performance by a Cast in a Motion Picture slot. Kept exploring film roles persistently, he afterwards took part in Bryan Gunnar Cole-directed drama “Day Zero” and crime thriller “Oxford Murders” besides again lending his voice for another animated feature simply titled “9”, all slated to be screened commercially in 2007. In the meantime, he eagerly ventured into film producing, collaborating with Anthony Moody and Rob Malkani of Indalo Productions to develop heist movie "Black Wings Has My Angel" (2008).