Maksim Chmerkovskiy and Peta Murgatroyd Emotionally Reunite in L.A. After He Fled From Ukraine

The Ukrainian-born professional dancer is pictured sharing a warm embrace with his wife at the LAX after he opened up about his traumatic escape from his homeland amid Russia's invasion.

AceShowbiz - Maksim Chmerkovskiy has safely returned to the U.S. after he was briefly detained in Ukraine. The Ukrainian-born professional dancer had an emotional reunion with his wife Peta Murgatroyd upon his arrival in Los Angeles.

The 42-year-old pro dancer touched down in Los Angeles International Airport on Wednesday, March 2. In photos taken by paparazzi, the pair shared a long, sweet embrace in the airport terminal before walking out together. 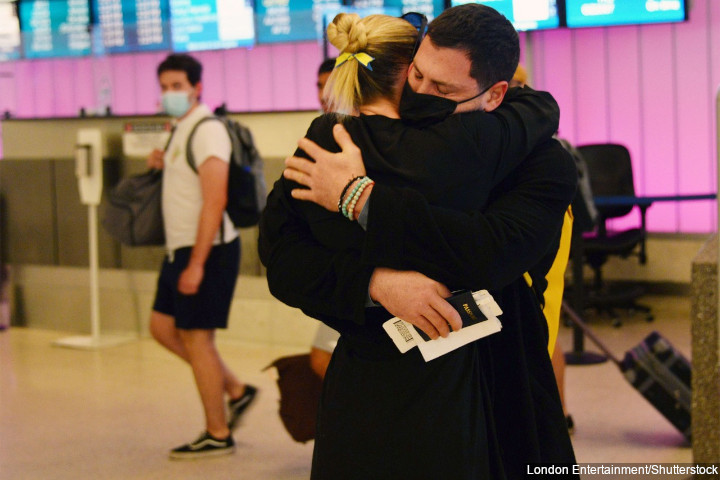 Maksim spoke to ET's Kevin Frazier at the airport, where he admitted, "I just don't want to resent peace somewhere else because of what I just saw, that's the reality. I don't know really what to say right this second."

He also spoke to photographers and reporters outside LAX. "The reason why Ukraine is standing right now is because of the Ukrainian people," the "Dancing with the Stars" alum said, explaining that this sort of conflict was something many had been expecting for years. "And the fact that the entire world is helping."

Maksim then reflected on the global impact of the conflict. "If we don't get involved, this thing is going to go everywhere else. I think that in 2022, following this action, we have to completely rethink the way we do things as a planet," he explained. "There can never again be one person who can do something like this ever again. We have to have checks and balances globally, not just one country at a time."

Maksim previously fled from Ukraine to Poland after he was arrested in Kyiv amid Russia's invasion. He took a 23-hour train ride from Kyiv to Poland's capital, Warsaw. He shared in an Instagram video following his escape, "I'm scared, I'm confused, I'm terrified and I just lived through some s**t that I'm going to need a lot of therapy for."

Maksim Chmerkovskiy, Peta Murgatroyd Anxious About Latest Pregnancy Due to Past Trauma