In last February, the stuntwoman-turned-actress, who played Cara Dune on 'The Mandalorian', was let go from the 'Star Wars' spin-off show over her political posts connected to the Holocaust.

AceShowbiz - Actress Gina Carano weighed in on the drama surrounding Whoopi Goldberg, who was suspended from "The View" over her insensitive comment on the Holocaust. Taking to her Twitter account, the former star of Disney+'s "The Mandalorian" slammed ABC for the decision.

"I want to send blessings & love out to the Jewish community," Gina, who was previously axed from the "Star Wars" TV series over political posts connected to the Holocaust, wrote on the blue bird app on February 2. Comparing the matter to her own experience, she added, "When I was being smeared, cancelled & misunderstood, it was a Jewish man @benshapiro who reached out & asked if I'd like to talk about it. Maybe @WhoopiGoldbergcould talk to Ben. Conversation over cancellation."

In a separate tweet, the former MMA fighter added, "Two weeks to slow the double standards." 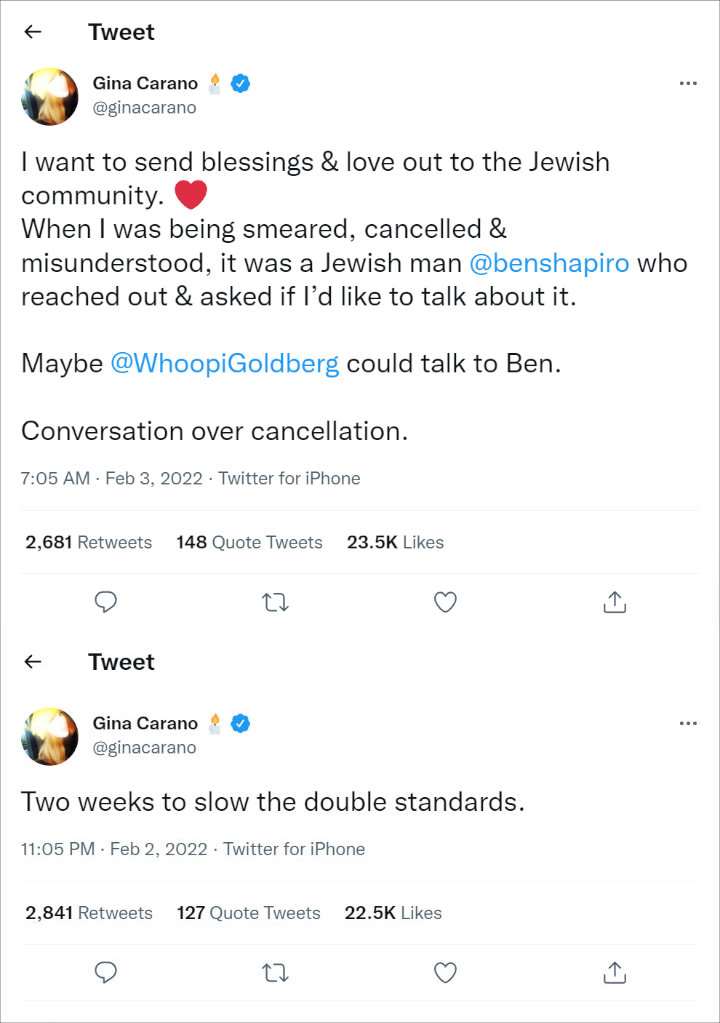 Gina Carano commented on Whoopi Goldberg's suspension from 'The View'.

Gina was in a similar situation back in early 2021. In last February, the stuntwoman-turned-actress, who played Cara Dune on the "Star Wars" spin-off show, was fired by Lucasfilm after sharing her radical beliefs on social media as she compared life as a conservative in modern America to that of a Jew in Nazi Germany. That prompted hashtag #FireGinaCarano to trend on Twitter.

"Gina Carano is not currently employed by Lucasfilm and there are no plans for her to be in the future," a Lucasfilm spokesperson said in a statement at the time. "Nevertheless, her social media posts denigrating people based on their cultural and religious identities are abhorrent and unacceptable." It was also reported that Lucasfilm had "been looking for a reason to fire her for two months, and today was the final straw."

As for Whoopi, the Oscar-winning actress was suspended from "The View" after saying in the Monday, January 31 episode of the talk show that "the Holocaust isn't about race... It's about man's inhumanity to man. That's what it's about."

Following backlash against the co-host, ABC News president Kim Godwin said in a statement, "Effective immediately, I am suspending Whoopi Goldberg for two weeks for her wrong and hurtful comments. While Whoopi has apologized, I've asked her to take time to reflect and learn about the impact of her comments. The entire ABC News organization stands in solidarity with our Jewish colleagues, friends, family and communities."

In her apology, Whoopi wrote on Twitter hours after the episode aired, "On today's show, I said the Holocaust 'is not about race, but about man's inhumanity to man.' I should have said it is about both. The Jewish people around the world have always had my support and that will never waiver. I'm sorry for the hurt I have caused."

She doubled down on her statement in the show's Tuesday episode. "Yesterday on our show, I misspoke. I tweeted about it last night but I want you to hear it from me directly," she stated. "I said something that I feel a responsibility for not leaving unexamined, because my words upset so many people, which was never my intention."

Joy Behar Says She's 'Sick' of 'The View' After Her Firing