Weeks after being hit with backlash over his insensitive comments, the 'Red Light Green Light' hitmaker hilariously says he is quitting hip-hop, stating, 'f**k a rap.'

AceShowbiz - DaBaby is poking fun at the recent cancelation of himself. After being engulfed in controversy surrounding his homophobic remarks at the Rolling Loud, the "Red Light Green Light" rapper joked about "switching to R&B."

On Monday, August 16, the 29-year-old musician took to his Instagram Story to share a selfie video with his daughter. In the short clip, the rapper could be heard singing J. Cole's 2013 hit "Power Trip" featuring Miguel. Over the footage, he wrote a caption that read, "They done canceled yo daddy twin. I'm switching to R&B." He then ended his note as saying, "F**k a rap," adding a face with tears of joy emoji and a mic emoji. 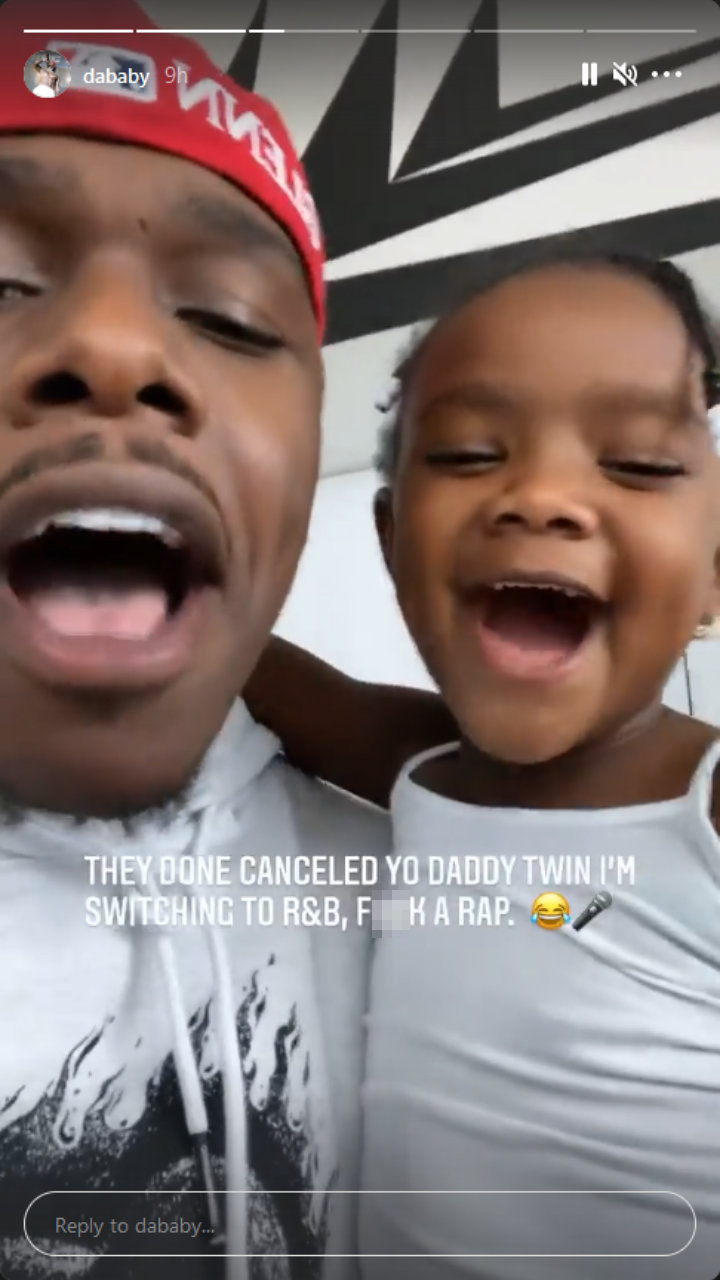 DaBaby's post soon sparked debate on Twitter as social media users came up with their own suggestions of which genre the rapper should pick. One fan wrote, "I will never listen to another dababy album if he switches," while another added, "No, pls stoppp."

"Guys pls uncancel him I don't wanna hit shuffle on an r&b playlist while I'm with my girl and as soon as I put it in the speaker goes YEAH YEAHH," a critic sarcastically said. Another user shared the same sentiment, "Protect rnb from dababy at all costs."

DaBaby landed in hot water after he performed at the Rolling Loud music festival on July 25. At the time, he told the audience, "If you didn't show up today with HIV, AIDS, or any of them deadly sexually transmitted diseases, that'll make you die in two to three weeks, then put your cellphone lighter up." He also added, "Fellas, if you ain't sucking d**k in the parking lot, put your cellphone lighter up."

Following his insensitive remarks, DaBaby was dropped from concerts such as Lollapalooza and New York City's Governors Ball Music Festival. His collaboration with Dua Lipa, "Levitating" was also removed from multiple playlists on Apple Music.

Defending DaBaby was Lil Wayne. During an interview with Los Angeles Times, the "Sucker for Pain" rapper said, "You know how it does. The spotlight on artists and celebrities is absolutely crazy. You don't even have to be a celebrity." Elaborating on how powerful social media is, he added, "Even normal people can feel like they're wrong because their 200 followers said something. But that's the power of social media today."

Nick Cannon had also defended DaBaby against the cancel culture regardless his insensitive comments. In a recent radio show, the former "America's Got Talent" host believed that the "Suge" rapper should be educated instead of "canceled."

"If I'm saying something that is not correct about your community, show me where I'm incorrect. Correct me," the "Nick Cannon Presents: Wild N' Out" host explained. "If I'm saying these things about the LGBTQIA community, show me where I'm wrong." He added, "Not only is that going to help me, but you're going to help so many other people who think like me. There are so many DaBabys out there."

DaBaby Ready to 'Bounce Back' After Controversy Over Homophobic Rant